True Tales of Yard Sales: What Do You Think, Maddie?

The traditional way to celebrate my birthday is with a weekend-long jaunt of thrifting, yard saling, and flea marketing.  I've been doing this since way before I became a dealer.  It used to be a fun way to get out to some places that I didn't get to a lot.  Now, it's turned into a practical way to lay in some stock for the winter.

So, one of the yard sales I hit was one that I had been to the week before.  I typically don't do repeats, unless there's some totally killer stuff there at totally awesome prices, but something about my experience there was a little off, so I wanted to see if anything had changed.

The sale was initially advertised as "Must sell everything due to death in the family."  It was in my 'hood, so I thought it would be worth checking out.  There are a lot of houses in our area that are still occupied by the original owners.  As they die off, the family has to deal with the property, and everythig in the house.  Sometimes, this can lead to some good yard sales.

So, I checked it out.  And it was pretty much a mess.  Stuff all over the yard.  Nothing priced.  Family trying to sort through everything and see what should be trashed, sold, or donated.  In other words, they were doing everything that should have been done before the sale at the sale.  That's usually not a good sign.

My usual approach when things aren't marked at a sale is to pick up the first thing that interests me and see how much it is.  I can gauge from the answer whether it's worth spending any more time at the sale or not.

So I picked up this glass serving tray with some vintage graphics on it and asked.  "What do you want to pay for it?" was the answer.  That's never a good sign.  It almost always means that I'm going to get peeved and leave because they're going to get insulted by my low offer.  But, when I am asked what I want to pay, I don't sugarcoat it.  In reality, I don't want to pay anything, but I am morally opposed to stealing.

Anyway, I say "Fifty cents."  Again, no lie.  That's what I want to pay.  They did ask, after all.  No, I'm not expecting to get by with that, but their response determines the course of the rest of the sale.  And, unfortunately, their response was one of moral indignation. Deal-killer, that.

"Oh no!  That's at least three dollars!"  Well, if you knew that, why didn't you say so?  It would certainly have saved you from getting pissed at my honest answer to a question you asked! Always, always, always price your stuff, people.  Or at least have prices in mind.

So, I left.  It was pretty obvious this one wasn't going to go anywhere.  But, I kept thinking, "If they'd just made a counter-offer.  I was willing to pay a buck-fifty for that tray."  That's the way to deal with the lowball offer, people.  Counter.  Don't get insulted. Counter!

When I saw the same address listed for my birthday, I almost wasn't going to stop by.  But, I got to thinking about dealing with the aftermath of a death and how that can overwhelm people.  Plus, it was in the neighborhood.  Couldn't hurt to stop back by.

Well, it was almost identically the same batch of stuff in the yard, except for the platter I had wanted.  But most of the people who were trying to run it were gone.  This can be a good thing.  Too many conflicting voices when trying to deal with a yard sale is always bad news.  And Ms At Least 3 Dollars was one of the ones not present.  Sometimes, the problems with a sale can be nailed to down to one person, so I was hoping this might be the case.

Still, nothing was priced.  Arrrgh!  Did they learn nothing?

This time I started at the books.  Much less personal.  Much less likely to have sentiment attached.  I asked about prices and the seller said "Fifty cents each for most.  More for some of the bigger ones."  Okay, now we're talking.  So I got a few.

Then I found a box with several Dr Seuss stuffed figures in it, including Horton from Horton Hears a Who.  I asked about them, and the seller said, "I'll have to ask."  Uh oh.  Not a good sign.   She shouts inside the house for Maddie to come out and talk to me about her stuff. 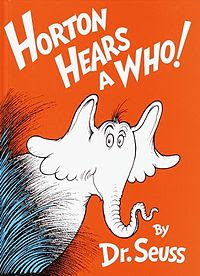 When Maddie comes out, I finally understand everything.  (By the way, that's not her real name.  Since I'm using a lot of details in this story, I felt like I ought to change it.)  Maddie is a few years older than me and she's mentally handicapped.  So I ask about the items, and she looks to the other seller, who tells her that she should decide since it's her things.  She decides fifty cents each.  And I agree, so Horton and friends are going home with me.

I'm not sure of the relation between Maddie and the other seller, but they are family.  In talking to Maddie a little and listening to some other details, I was able to piece some of the story together.  The house belonged to her mother who had recently died, and Maddie had lived there with her.  So now the family was having to deal with the aftermath, including helping Maddie with new arrangements.  I'm not sure what those were, but she did say she wasn't going to have room for everything any more.

And, all of a sudden, I was wishing I'd been just a bit more patient the previous week, even with Ms Three Dollars.  That's a lot to have to take care of and deal with.  I might have learned a little lesson in humility or patience or something.  I'm just glad I wasn't openly rude in my dealings with them.

Anyway, I paid Maddie.  She took her own money, which I thought was cool.  I really liked the way that they were including her in the disposition of her items.  Then I saw a cute set of Pfaltzgraff dishes in that classic 70's rustic Folk Art pattern that everyone seemed to have back in the day.  Nice set too.  Even had a meat platter and two veggie bowls. 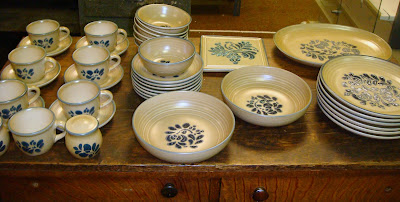 I loved the nostalgia vibe I got off of them right away.  And I love selling dish sets when I can get them reasonably.  So I asked about them.  Turns out, they had been the mother's, so Maddie was calling the shots.  She looked to the other folks again and they told her to decide what she wanted.  She looked at the dishes and said "Five Dollars."  Then she asked them if that was okay.  They said "Is that what you want to sell them for?'  She said it was.  Then they said "Then it's okay."

I've worked with mentally handicapped adults before, and I really liked the way they were interacting.  I have no doubt in my mind that they would have protected her from getting ripped off, but they were letting her make  the decisions, which was appropriate.  And, that was the perfect price for me!