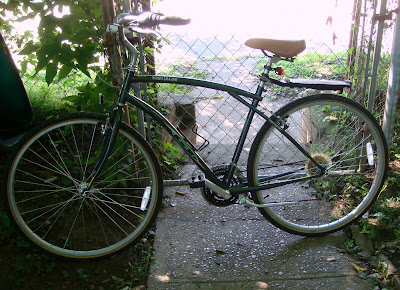 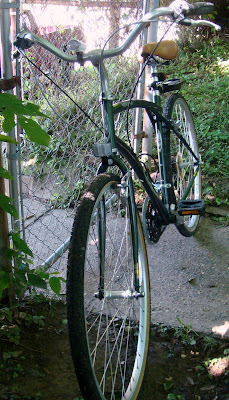 Isn't he cool?  I love the lines.  He's so sleek and awesome looking.  Even the built-for-people-with-smaller-asses-than-mine seat is awesome. 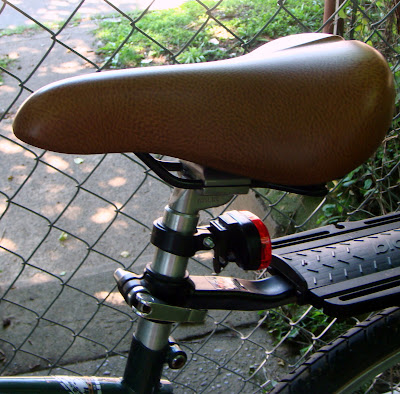 He is taking a bit of getting used to, though.  He's taller than my old bike, but his 17 inch frame is more appropriate for my height than the 15.5 inch frame of the old bike.  It's just an adjustment to get used to sitting so high up.  Right now, I'm having a little trouble getting started back up from a dead stop because pushing off from that height is a little awkward for me.  I think I'll get the hang of it, though.

Windy rides really smooth.  He's lightweight, so it's easy to build up some speed.  And he takes hills really well.  I'm enjoying the ride a lot.

I also like that he's got space on the back for carrying stuff, plus more than enough room for a couple of baskets, which will be coming soon.  Windy's going to be an awesome thrifting and yard saling bike!  I'm not sure if I can fit a basket on the front, but I am going to try.  Another thing I really like about Windy is the kickstand.  I haven't had a bike with one since I was a kid.  It's so convenient!

Now, about the name.  Keith's bike is called "Townie" because, well, it's a Townie.  My old bike was a mountain bike, so I called it "Mountie."  Windy is a Windstream.  You get the idea.  (If I had gotten another mountain bike, I would have called it "Re-Mountie.") 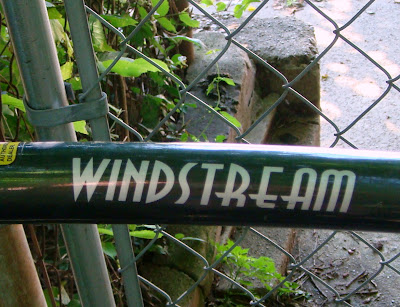 I'm betting that some of you (I'm looking at you, Roger!) immediately thought of this when you saw the name:

I have to admit that it makes a catchy riding tune to have playing in your head as you cruise along.  However, I get other images, because I'm weird like that.  (Besides, Windy looks a little creepy in that video.  Sometimes she seems more menacing than carefree.)

This is my vision:

It's from CardCaptor Sakura, one of my favorite anime from days gone by.  Did you catch that the first card is called "The Windy,"  I have a deck of those Clow Cards around here somewhere. Anyway, in the anime, they say "Windy" with a heavy phonetic Japanese pronunciation, so it comes out as "oooindee" which I just love.   I could not find a clip of her using the card with the original sound intact, so you all could hear it.  Seems everyone wants to mess around with their anime clips on the YouTubes.

Anyway, that's what I think about when it comes to the name "Windy."

And even though both of those Windy prototypes are female, my bike is male.  It just seems more fitting, somehow.

I know you too well, Rog.

Love the new bike and hope you have many good rides! Awesome that you can take it saleing, too! Have a good weekend, Lynn

what a nice bike! My cousin just started riding and he had to take a break because, and I quote, "my junk hurts." TMI, I know. Hope you hit pay dirt tomorrow. I bought a china hutch today - couldn't have drug that home on a bike!