This is my bike: 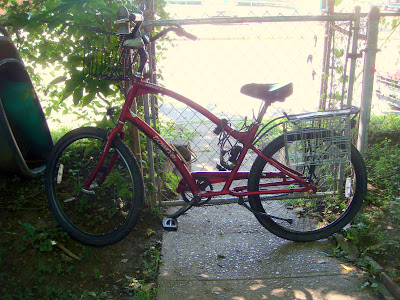 This is my bike on yard sales: 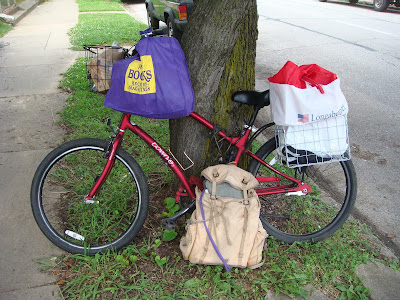 In the interest of accuracy, I do have to admit that this is not really my bike.  It's Keith's, which is better for yard saling because it has two baskets.  I'm going to get a couple for my new bike and then I'll have the perfect yard sale bike!  Yay!

Saturday turned out to be the perfect day for yard sales and for biking.  It was clear, cool, and a little bit breezy.  Ideal.  So, I made up a little list and set out on my pedal journey to find stuff to peddle.

Re-selling has acquired a reputation for being a "green" form of retail enterprise.  Like a lot of other claims to environmental friendliness, I believe this reputation is both overstated and misunderstood.  There's a long blog post about this topic for sometime in the future, but I seriously do try to maintain some level of environmental sensitivity in what I do and how I approach my re-selling enterprises.

One of the things I do is try to plan routes on yard saling days that proceed along some sort of a path and minimize backtracking and fuel consumption.  And from time to time, I take my bike out on the hunt.  One time, I even set out on foot!

Another factor that worked out in favor of the bike was the presence of many sales right in my own area.  I've lived in this neighborhood for a decade now, and I was on streets Saturday that I had never even heard of before.  It was kind of cool.

Taking off on a bike to a sale provokes all kind of reactions from the sellers.  A couple of younger guys having a sale thought it was cool, and we talked for a while about bike riding and stuff.  At another sale, a woman offered me a huge of glassware and cups and such for a dollar.  I had to decline and cited space reasons on the bike and she started laughing.  Another woman at a different sale tried to sell me a basket.  When I tried the same space line on her, she said "Hang it on that left handle bar!  There's nothing on it."  What else could I do?

I also stopped at a sale with a set of sisters who were willing to do whatever they needed to do to get everything I wanted on the bike.  I thought that everything  would work out the way it was first packaged up, but they were doubtful and so they repacked and re-wrapped and re-bagged everything until they were satisfied it would work.  And it did!  Nice job ladies!

There was a benefit sale that I like to go to every year, so I shopped the neighborhood for several hours and then dropped everything off at the house.  The bike pic above comes from the drop off stop.  I hit the benefit sale after that, but didn't pick up quite as much there.  I stuffed my backpack full, but didn't use the baskets at all.

So how much can you buy when you yard sale on a bike?  Well here's the haul from both trips, all spread out. 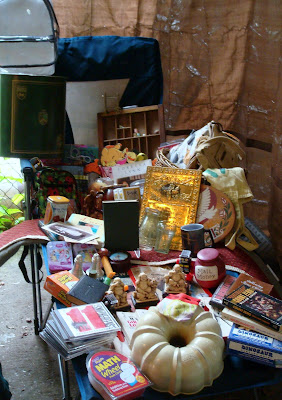 The pic did not turn out as planned and looks more cramped than I wanted.  It started raining when I started taking things out of the house to photograph, so they're all stacked up on a lounge chair on the back porch, instead of artfully arranged on our backyard table, like I planned.

To make up for that, here are some close up shots: 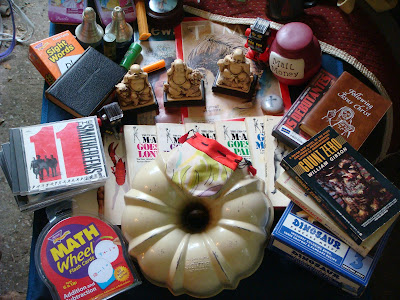 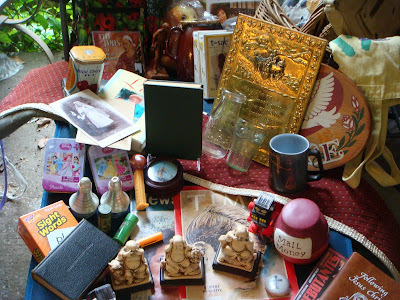 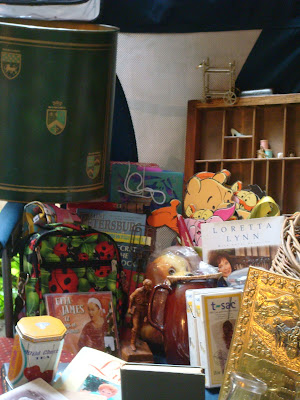 My husband would be much happier if I just bike yardsailed. It would cut down on my "by the Box" purchases. I do have a pretty good neighborhood for this type of "sailing". And I might work off this extra 30 pounds I am carrying around.
Debra