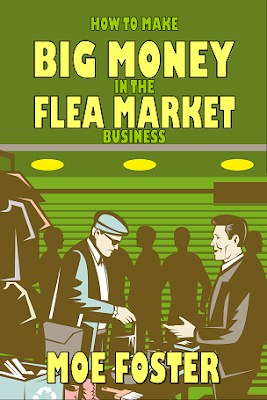 So, I'm at the big flea market over the weekend and I see the above book on a dealer's table.  I ask how much it is and he says "Ten bucks."  It's a small book, only 44 pages, so the price is a little steep for me and I pass.  The name rings a bell with me, though.  I look over the back of the book and see that it's about selling in the kind of vendor mall set-up where I have my booths, as opposed to the traditional flea market, like the one we're standing in.  At that point, my curiosity is getting the better of me, so I have to ask:  "Are you the Moe who used to have all those spaces at Dixie Trading Post?"  Sure enough, he's that Moe!

The first time I ever went to the Peddlers Mall where I have my booth, probably about 30% of the space was used by one vendor--Moe.  Pretty much the entire back corner of the store was his booth.  Eventually, the Peddlers Mall left that building and moved to its current location.  Shortly after that, I rented my first spot there.  Moe stayed in the old building and helped the owners open their own mall there.  He stayed there for a while and then moved on.  They even used to advertise that the mall featured "Moe's Backroom."

In other words, he's been around a while and knows his stuff.  His book is designed as a guide for folks looking to enter the market, so to speak.  We talked for a bit and he told me that the book was too basic for me, since I've been doing this for a while now.  He said that he was trying to share some of the mistakes that he made in the beginning so that other people could avoid them.

I can actually think of a few people who would have benefited from having a book like this.  Too many people start a booth without any plan whatsoever and leave in a huff after a few months when they aren't even making their rent.  If you're interested in reading it, you can order it from the publisher here or get it from Amazon here.

Of course, you don't have to lay out ten bucks for a book to learn this stuff.  I'm planning a whole lot more "This is how we do it" posts for the next few months.  There are some other really good blogs on the topic as well.  Everybody comes at the topic from a slightly different angle, but there is lots of good info out there, if you want it.

Email ThisBlogThis!Share to TwitterShare to FacebookShare to Pinterest
Labels: junking, Moe, reading, the booth, this is how we do it