So I have an appointment scheduled with a radiologist in a few days.  Still waiting to hear about the oncologist appt.  Maybe they'll end up happening at the same time.  I've already decided that I'm just going to go in and ask for what I want when I go the appointment:


I want just enough chemo to lose 35 pounds, followed by just enough radiation to get some cool super-power.

(I figure that if I can get chemo to whack off 35 of the 40 pounds I want to lose this year, then I'll have no trouble making the rest of that goal.)

Seriously, I still have no idea what to expect or what will happen, but as long as I'm playing it by ear, I might as well have fun with it.

Speaking of playing it by ear, my right ear has been swollen up like crazy since the surgery.  To protect an important auditory nerve, it was necessary for them to pretty much cut all around it.  Since the stitches have come out, the swelling has been noticeably dropping every day.  When I first got out of surgery, it looked like I had a clown ear grafted on to my head.  Now, it's starting to look like my own ear again.  I just wish that my earlobe would stop looking like a pig in a blanket.

I tried to do a session at work last Thursday, and couldn't even make it all the way through!  I'm still going to try and make it a full work week this time around.  Wish me luck!  I have lots of opportunities to sit and rest during my normal work day and I intend to take advantage of all of them.  I went to the booth Friday to work and found that I was okay as long as I gave myself plenty of long breaks whenever I needed them.  I still managed to get it most of what I needed to done...

...At least until my plans changed entirely.

I went in with the intent of packing up the Christmas, pulling a bunch of long time shelf-sitters for either markdown or donation, and start emptying shelves so I could move them around and create a new arrangement in the space.

However, a large vendor mall down the road from us is closing at the end of the month, which means that vendors are spreading out and looking for new places to go.  To prepare for this, the management is making sure that available spaces in our mall are cleaned out and ready for new vendors to move in.

My booths are part of a kind of "block" of four that are right there in a nice square together.  I have three of the four and have often dreamed about having the whole block and creating an awesome open space there.  The fourth spot has been open for over a year, but I had not rented it because it has walls and shelves that were left by a previous vendor.  I would have had to purchase the walls (for $150) to rent the space, and I didn't want them.  In fact, I'd been trying to get rid of the walls I have in my own spaces for some time now.  I'm really wanting to create a unified space with some flow to it.

Here's a very much not-to-scale drawing of the situation.  The lines on the inside represent the walls I am talking about.  The overall block is 16 feet wide by 21 feet long.  Told you that drawing wasn't to scale. 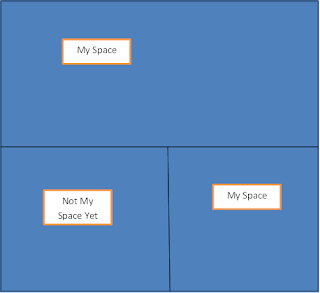 While they are working in this one booth, we get to talking about the space and my renting it.  I bring up the unwanted walls again and they tell me I don't have to get them if I do not want them.  If I want the space, they'll move them right out for me!  A few more minutes of conversation and they have agreed to buy my other walls and move them too!  That sale will cover my first month rent on the new space!

Since I'm concentrating on getting more stuff out of the house and into the booth to sell, I certainly can make use of the space, plus my deceased merch costs right now also offset my increased rent, until this new space gets its footing.  It's pretty damn close to a win-win, as far as I am concerned.

Of course, now my plans are to get my walls cleared for moving.  I'm going to have to cram everything into one corner for that move and then spend several days getting everything placed throughout the new booth.  I've got some ideas forming now about how I want to do it and I think it's going to look great!  I'll try to remember to do pics.

A really interesting thing happened last week on the blog when I got a comment from someone I don't know.  It was a get well wish on one of my surgery posts from a guy called Chace Thibodeaux.  Well, I got to following his links around and found his blog and a post about someone I hadn't thought about since I wrote a blog post about him myself five or so years ago.  I think if you go read that post, you can kind of get the gist of what the whole deal with this dude was about.

Since I wrote that post, I'd kind of drifeted away from comics and comics fandom, which was never a place  I felt very comfortable as an adult anyway.  I still love the things.  I still read the things.  I even still save a few of them.  But, mostly these days I prefer to get my comics kicks by making reasonably-priced back issues available in my booths.  It's a lot more fun and a lot less drama. I ain't got time for all that other stuff!

Having been out of the loop, I was kind of surprised to see that this guy had kept his old antics--fraud, lying, general hissy-fits, and just piss-poor behavior--up until the end of his life.  The posts at Chace's blog was an obituary, you see.  As part of his own write up, he even compiled a list of various postings from around the comics webs about this guy, which included my very own post of 2007.  Things move in oddball circuits sometimes, don't they?  Remember this:  Once you put it out on the web, it never really goes away.

Anyway, thanks very much to Chace (who seems like a nice dude) for both the link and good wishes.  As to the other guy, well, I'm sorry for his family.  In addition to dealing with a loss, they also may get stuck cleaning up all of his messes as well.  Remember this as well:  Sometimes the stuff you do gets passed on to others to deal with, often at the worst possible times.

On those words of wisdom, I'll close out here.  Thanks so much to everyone who stops here and makes this a part of their internet journey from time to time.  Double-triple-special thanks to all of you (online or in person) who have kept up with me through this medical stuff.  Your notes and hugs and comments and well-wishes have meant more to me than you can know.

Email ThisBlogThis!Share to TwitterShare to FacebookShare to Pinterest
Labels: cancer, changes, comics, lots going on, Monday Rambles, my ear looks like an appetizer, the booths

Oh Eddie, I had you beat on the asking for superpowers from the radiation doc thing. My doc was a party pooper, wouldn't promise any at all. Since I am a Mom, I did already have eyes in the back of my head, which is a good superpower to have!
I did get a nice sunburn on a special part of my anatomy from radiation. Too bad "Jersey Shore" wasn't on TV yet; I could have asked for a Snooki Tan. Maybe you can get one of those! Hang in there!

And I really am sorry that YOU have to go through this. But I'm glad you're able to keep up a positive attitude.

Here's another hug! looked for you when i was in the store on Sunday but didn't catch you. Good to hear that you're healing and the swelling is going down and as always...love the positive thoughts and the humor.
See you soon. K