How I Feel Sometimes

Being a comic nerd means that sometimes you come up with interesting analogies and images.  I was thinking about my insides being a swirling mass of toxic chemicals the other day, when it hit me: 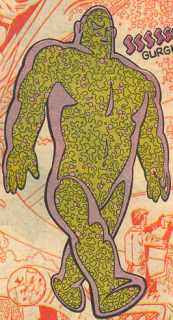 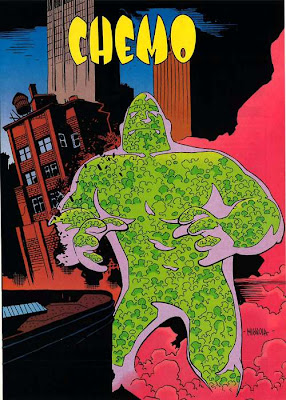 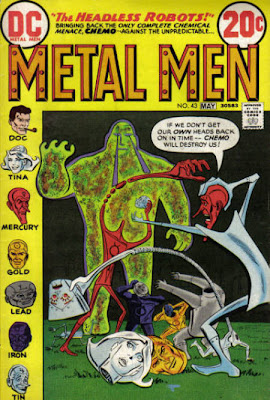 In the mid-to-late-sixties, DC Comics were sometimes flat out weird.  Seemingly any idea they came up with got thrown into its own comic.  This is my favorite era, period, and type of comics.  If you were a kid in the early seventies reading your first comics, like I was, you got exposed to a lot of reprints of this great stuff for years.  When I started seriously hunting flea markets for back issue books as a teen, this is the stuff I was looking for and I could often find it for 50 cents or less back then.  It was a dream.

When I did my great comics purge a few years ago, I made sure that these comics formed the core of the batch that I kept.  In fact, that's pretty much all I am looking for when I go hunting for myself these days.

Lest this turn into a "Junkin' Memories" segment (of which I promise there are more to come--two are almost done), let me return to Chemo.  One of those wacky DC Comics of the late Silver Age was called Metal Men.  It was about a goofy bunch of robots that had sort of human emotions but were very aware that they were just robots.  Each one was named after a different metal and displayed all the chemical and physical properties of that particular metal.  Big, goofy, fun.

One of their enemies was named Chemo.  He was this walking repository of toxic waste who could shoot deadly sludge everywhere.  Kind of an environmentalist's nightmare.  (I will confess here that I believe the name is supposed to be pronounced "cheh-mo" with an "e" as in "chemistry," but I don't know for sure, as I have never heard it pronounced aloud.  Work with me people!)

As far as my own situation goes, while I have spewed forth from my mouth on a few occasions here lately, none of it has been deadly, as far as I know.  Unsightly, yes.  Unappealing, yes.  Deadly, not so much.  Still, it's an image that works on some levels, so I am keeping it.

I've also never fought a silly band of talking robots, but that might be fun.  Speaking of the Metal Men, like so many other comic characters, they've been reinvented and rebooted several times over the years (so has Chemo), but the version I am most familiar with (and love) is the originals.  Some things are never better than when they are first created.  Most comic characters fall into that category.