Chemo is tomorrow and I am dreading the whole thing.  It was such an ordeal to find a vein last time, that I am not looking forward to going through it again.  I just keep telling myself that by the end of July it will all be over.  I hope I don't puke this time.  I hate throwing up.

I did get out to three church sales on Saturday.  I didn't get anything really spectacular, but did have a couple of interesting experiences.  A lady nearly ran into me at one sale.  She was walking across the room right at me, while looking over her shoulder in the opposite direction the whole time.  I, of course, had my arms full of stuff, so I moved to get out of her way.  She, still without looking in my direction at all, adjusted her course so she was still heading right at me.  It was kind of creepy.

Finally, when she was about to barrel right into me, I said "Excuse me, Ma'am!" and tried to step around her.  She snapped her head around and gave me the nastiest look.  I don't know, maybe I was supposed to just let her walk right into me?

At another sale, I found this little guy. 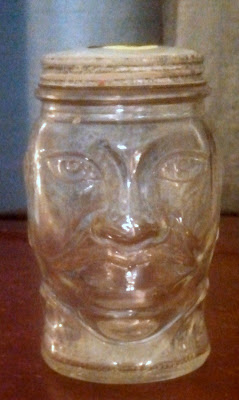 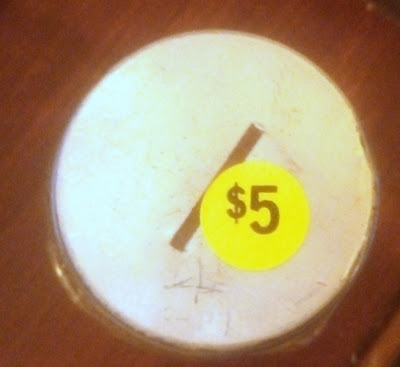 He's clearly marked $5 on the top, but being in church sale mode, my mind interpreted this as five cents.  Heck, most of the other stuff I was grabbing was 10 cents, so it's kind of a natural assumption.  I didn't realize my error until I was checking out and I looked at the price again.  Doh!

I was on the verge of telling them that I didn't want it, when one of the check out ladies asked the other one if that price was right.  The second lady said that was the correct price "because it's an antique" but I could name a price if I wanted.  I offered two bucks, and they accepted.  For the record, I'm pretty sure it's a reproduction, but I am also sure I can turn it over in one of my booths pretty quickly.

Speaking of the booths, I finally made the damn rent at the Peddler's Mall over the weekend.  It's never taken this long before!  This has been an agonizing month! I'd have a forty or fifty dollar day, followed by a string of four dollar days.  Early last week, the sales were so low, I was suicidal.  One day, I said "It can't get any worse than this."  The next day was a dollar less than that, so I decided I needed to keep my mouth shut.

The heat over the weekend turned the tide for sales, because it drove everyone inside to do their secondhand shopping.  I'm hoping for a scorching summer.  I don't ask for much, just thirty dollars a day.  That's a pretty reasonable goal.  It makes the rent, covers the expenses, and gives me a nice check.

I did a YouTube soap opera binge over the weekend.  I found a CBS special from 1994 called Fifty Years of Soaps.  Two hours dedicated to the TV broadcast history of the soap opera.  Tons of stars.  Tons of flashbacks.  Man, those were the days.  In fact, those were the tail end of the glory days of the soap.  In a couple of years, the decline would start.

There were ten shows on the air at that time, as opposed to four today (not counting the really lame online versions of All My Children and One Life to Live).  I guess I got a little nostalgic over the whole thing.  These are tough times to be a soap fan.  It's tough to be fond of an artform that might be on its last legs.

I've got posts put together for the whole week, so keep checking in,  If anything happens with chemo, I'll update that on Wednesday.  Other than that, I'll probably be low key for the rest of the week.  Take care!
Posted by EM at 6/24/2013 05:00:00 AM

Blogging ahead. GOOD blogger! You're learning all my trade secrets. (My colonoscopy is tomorrow - BTW, I wrote about it today. Do you think it was TMI?