I'm furloughed again this week, except that I managed to swing some evening hours for Tuesday and Thursday.  It's a good thing too, because I've got a booth to get ready to move.

If I can get in there, that is.  We had torrential rain all weekend, and the roof of the section of the store where I am fell in.  I was told my stuff was not damaged, but I'm not going to be fully satisfied on that point until I can see it myself.  The damage is supposed to be taken care of by now, but I didn't have any sales yesterday, so I'm not sure.  The store is closed tomorrow, so I think that will give them a chance to get things squared away.

My old sale has ended, so I'm starting a move out sale: 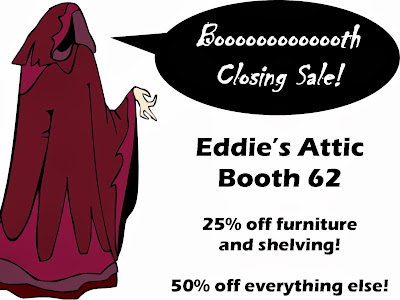 The store is having its outdoor sale this weekend, so I'll be cleaning out the booth for it.  Hopefully, that won't leave me with too much to move out.  I will be starting to haul a few pieces out and over to the Peddlers Mall this week.  I would love to be completely out before the end of the month, but we'll see what happens.

Speaking of the Peddlers Mall, the outdoor sale over there was only kind of so-so.  The previously mentioned torrential rains kind of put a damper on things.  The weather was okay on Friday, but Friday just isn't a bog yard sale kind of day for Louisville.  The storms broke just as soon as  I had closed down, and I got totally soaked to the skin trying to get home.  I felt like (and looked like) this.

Saturday it poured nearly all day.  Sellers were set up in the covered area of the parking lot, so we were okay, but it was raining so heavily that people could not get out of their cars to make their way to us.  When the rain finally slacked off, and it looked like things might pick up, the power went out inside the store, forcing it to close for two hours.  It was just a downer day.

It wasn't all bad, however.  I did make about sixty bucks.  I sold the albatro$$ chairs, albeit at a great loss.  Still, they're gone!  Never again!  I also sold an albatro$$ I hadn't gotten around to featuring yet, this large, handmade cabinet, which I thought had a nice rustic kind of flair, but quickly realized I could never display properly, as I have no walls:

Bonus:  I actually made money on it!  Which is good, since if you look up "hosed" in the dictionary, you'll find a picture of me and those damned chairs.  I almost brought the table down too, but I decided to hold off until I saw what kind of day Saturday was shaping up to be, since it is really heavy and doesn't sit on any of the flatbeds real well.  Turned out to be a wise decision.

Mostly what I had for sale were items that were left from a set of box lots I bought from another vendor.  I had already priced and taken the "good stuff" to the booth.  What was left were items that either weren't right for me, things I already had a lot of, or just plain crap.  I had 'em priced at $1 or .50 an item and everything sold but the crap, which I promptly took to the neighboring thrift at the end of the sale.  I made enough off of those items to cover the cost of all the boxes, so as the "good stuff" starts to sell, I'll be making money.

I also had a few experiences selling comics that will be the subject of a post later this week.

I also had a tragedy:


The flatbed cart I was using on Friday to haul stuff back upstairs to my booth didn't stop when I thought it did (darned momentum).  It kept going and careened into one of my card tables.  The only casualty was a ceramic liquor decanter, which is surprising, since the cart was heavy enough to have taken the table down.  Not five seconds after it happened, a woman came by and bought the other three decanters I had for sale.  I wish she had been ten seconds earlier.

Today, I'm going back to Peddlers Mall to freshen my Halloween display.  Most of the big stuff is gone, so the sales are starting to slow.  I did buy a few more things over the weekend, so I'm going to rearrange everything and spruce it up.  I'm also going to stop by the store where I am on the waiting list to see what things look like on that end.  I would love to be opened up in a second spot by the end of the year.
Posted by EM at 10/07/2013 05:00:00 AM