I am in the grips of a junking jones something fierce, folks!

Due to all the sales I was planning on participating in this month, plus one rainy weekend, I had not been to any sales in October.  Not one.  Now I did mange to get somethings from other sellers at the sales I was in, including a ton of free stuff at the YesterNook sale, and I have also managed a thrifting stop or two, plus a couple of runs through the Peddlers Mall (where I got a cover for my Nook for only ten bucks!), but that's only been enough to take the edge off of the need, not enough to totally sate it.

Thankfully, this coming weekend is the start of the Annual Eddie's Birthday Junking Extravaganza What's So Big It Actually Takes Two Weekends To Fit It All In!  I will tame this beast!  I swear it!

I did stop in a Goodwill on Saturday and was totally shocked to find it packed with people, until I took a look at what they were buying--mustard yellow pants, anyone?--and realized that everyone was hunting the pieces for Halloween costumes.  I over heard a debate about whether a white fuzzy sweater could be spray-painted pink.  It was all a bit much. 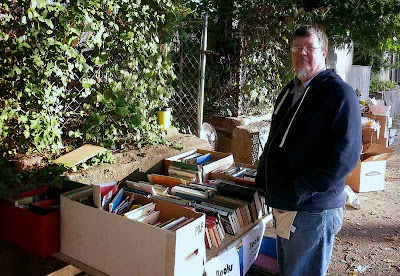 That's me selling my crap on the sidewalk behind our house.  It was cold here Saturday morning. I had to have a heater out there with me to stand it.  A couple of folks asked if it was for sale.  I told them they could have it for $3,000!  Seriously, it was cold and windy and overcast and just gloomy.

I knew the diehards would come out, but the casual shoppers sure didn't.  I had an early rush, but the usual mid-morning rush didn't happen.  Plus, the cold limited the foot traffic in our normally busy 'hood.  I finally threw in the towel at noon, which is way early for me.

Still, I got rid of a lot of stuff and made about a hundred dollars.  The bulk of what I was selling was box lot leftovers and stuff that I got for free, so every little sale was worth it.  There was only one item I really had any money in, a Willett mirror that I got for two bucks.  I bought it to go in YesterNook and have been worried about having to take it to the Peddlers Mall, where it's more likely to get broken.  I mentioned it in the CL ad, to hopefully draw some attention to it.  One of the first customers bought it for my asking price, so I was pretty pleased. He also bought an encyclopedia rack from me.  I had to explain to him what it was, which kind of tickled me, since it was pretty obvious he was a dealer.

The book scanner from the YesterNook sale came by.  For some reason, I think he thinks we're friends now, since he bought four books from me.  He practically admitted to me that without the scanner he's got no clue what he's doing.  It's also pretty obvious from watching him that he's not having any fun doing it.

This cute young couple came by with their puppy, who grabbed a stick from under one of my tables and carried it around with her like she was going to buy it. It was so cute!  Another guy saw all the books and told me that his sister had a lot of books too.  "She's got the complete Stephen King Library.  Collector's Editions!"  You meet the most interesting people doing this.

When it was all done, I pulled a couple of boxes of stuff to take to the booth post-holidays and then took four boxes to Goodwill.  Space in my shed, plus a little money now, and the promise of more to come.  Not bad for a bunch of mostly free stuff.  I took a couple of boxes of books to Half-Price Books and then spent what they gave me on some clearanced manga and games for the booth.  All in all, it was a pretty good (if cold) day.

Sunday, we got the last of my stuff out of YesterNook.  There still isn't anything else in that storage pod, which kind of makes my blood pressure rise.  I'm still a little sad to have left, but I also feel really peaceful at my decision to go.  Besides the fact that my sales at the Peddlers Mall are up, thanks to the extra attention I can give that booth, I've already sold some of the furniture that came over from the closed booth!  I feel like I've recovered a lot of the fun and enjoyment to junking again and lost a lot of things that were stressing me out.  Leaving was the right move to make.

I really feel for you with your cold Saturday yardsale - ohhhh soo cold you had to put on a hoodie??? puhleese!! Try having a yardsale and when you put the stuff out on the table a layer of frost instantly appears on your junk.

I feel for you....as a fellow book lover/seller, I can't bear to part with my books and if I donate them to GW, the scanner boys will get them. They don't sell and I can't keep them. Oh, the dilemma!