Here you go!  Take a little bit of this: 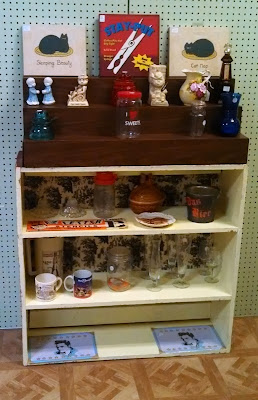 And a tad of this:

And this is what you get: 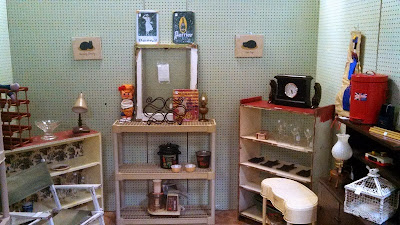 Okay, it's just another booth.  Not all that exciting, really.  Certainly not worth all the secrecy.  It's actually kind of anti-climactic when you take a close look and see all the holes I need to fill and stuff I need to do.  But it's mine and I love it!

My plan last fall when I left one of the stores I was in was to get into another market as quickly as possible, but be picky about it.  The "vintage" market proved to be not quite my cup of tea on several fronts.  I like the idea of the flea market style mall, with the variety and eclecticism you find there.  There's an energy and a feel in those kinds of places that I think suits me better.

I put my self on this list for another vendor mall that's a couple of miles down the road from the Peddlers Mall.  That's one of the reason I kept it kind of secretive for a bit.  Both malls are kind of rivals, and I didn't want to announce anything until I let the Peddlers Mall know.  It's no big deal to be in both spaces, really.  There are a lot of vendors who are in both, but I also know firsthand how gossipy the junker community in this town can be.  Rumors start and spread seemingly at a whim.  I just wanted to let them know that I'm not changing my relationship with them before I started talking about any changes here.

While I'm curating this space a little more closely than I do my other spaces, I like the flexibility I'm finding here.  There's a wide range of booths and products here and that means a wide variety of customers looking for a wider variety of things.  That I think bodes well for a seller like me, who may specialize in some things, but doesn't fit into a particular niche.

It's still not quite the way I want it to be.  My name came up on the list right before we went to Arkansas, so I did not have a lot of time to prepare.  I also couldn't move in until January 1, when the space was available.  In other words, I moved the first batch of stuff in, then I got sick and the weather went to hell and my little bit of stuff started selling and I could not get out there with any more.  I piled a bunch more in there over the weekend, but you can see I still have a way to go before it's up to snuff.

I'm selling okay there for a new space that's still under development in a month that's been plagued by horrid weather.  The pressure is on for this month, since I've got to make back the rent I've had to pay for January, plus make February rent.  I think once I get it completely ready, I should do okay.  I have plenty of stuff for the space, since I have the items that came out of my closed booth, plus things that were bought for that booth.  Unfortunately, I have to re-tag many of those items because I was not able to keep my same booth number for the new store.  It's one digit off, but that's a lot of stuff to re-tag.  I've been kind of focusing on things that had not already been priced, so I'm not doing a lot of duplicate work as yet.  This week, I'm going to start pulling a few things from the Peddlers Mall that have been there a while.  Hopefully, a new environment will work for them.

The new space does give me some challenges.  I've never had a booth with walls before.  I'm a little intimidated by all that pegboard.  I'm not totally sure what to do with it.  I'm contemplating painting it, but I'm not sure I want to put that much work into a space that's still in its trial phases.  That bare floor gets to me too.  I'd like to put a rug in there, but I'm afraid of people tripping. 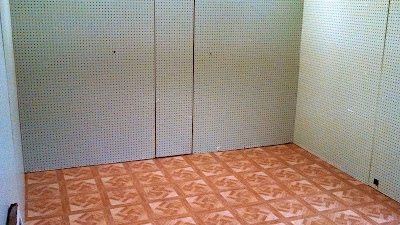 I have this marquee over the booth, so I'm toying with the idea of signage. 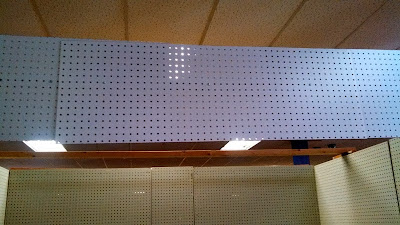 I'm playing it by ear at this point.  We'll go month by month and assess things as we go.  In a few months, if it's not working, I'll cut my losses and get out.  I stayed at the other place about a year too long.  I'm not doing that again.  I've got a good feeling about this one, though.  We'll see, I guess.

At least I have interesting neighbors! 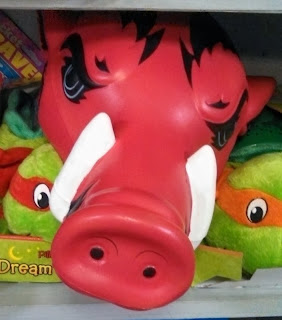 I like it but you're right - you need more stuff! I'm sending positive energy your way to make this work out. Don't let the pegboard freak you out - I know you can use it to your advantage.

Woo Pig Sooooie. A Hawg Hat! I have two of those foamheads in my booth - well, I did until I pulled them today.

Congrats on the new booth. I hope it does great!