Well, Monday it was pouring cold rain when I got off work and all I wanted to do was go home and have coffee, so I did.  I went on Wednesday and was so tired I barely got anything done.  Friday, I had to stay home for the morning and I was so tired after the whole week, I ended up napping instead of boothing.

I should be better adjusted this week.  I spent several hours at the booth yesterday and am going to spend today at both booths, so I should get good and caught up and even a little bit ahead.  I really need to--sales are starting to pick up from the post-holiday slump and, as we get further into tax season,  will soon be booming.  I have a bunch of chairs and end tables that I am looking forward to moving as folks get their refunds.

The second booth is a lot slower than I would like, but is picking up.  The quadruple whammy of adjusting my schedule, the bad weather, not having enough stock, and struggling to find the time to price more are having an effect.  My plan for a second space included using my same booth number.  If I had been able to do that, I would have had plenty of stuff already priced and ready to go.  I'd be fully stocked and cruising now.  Having to price stuff with the new number has slowed me down quite a bit.  I will get ahead of it, but it's going to take another couple of weeks.

We had a bit of excitement in the house last week.  We got something new:


I closed the lid after I took the pic.  The plumbers left it up.  One important rule in a cat household is to keep the toilet lid down.  We're starting to replace things in the house this year.  We've been here almost 13 years and none of the fixtures were new when we bought the house, so it's time.

We're kind of in love with the new toilet.  No more wondering if it will flush this time.  No more waiting forever for it to fill.  No more jiggling the handle.  Plus, it's Watersense rated and it's a few inches taller than the older one--easier on the aging knees and hips!  Going potty in this house has never been so wonderful!

Uhm...how about we move on to another room of the house?  Or another topic?

Can I buy a lot of stuff at the thrift store half price sale? 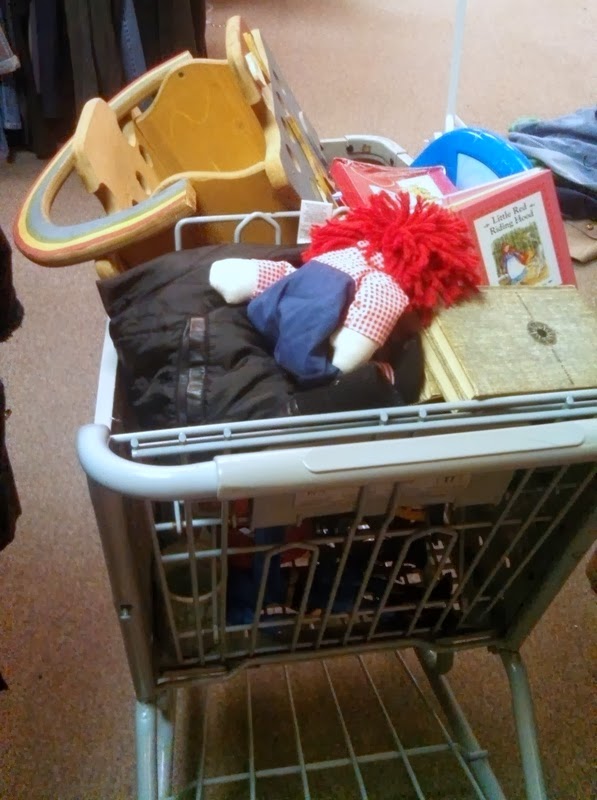 It was a busy day of estate sales and thrifting Saturday.  Other half price purchases include, but are not limited to: 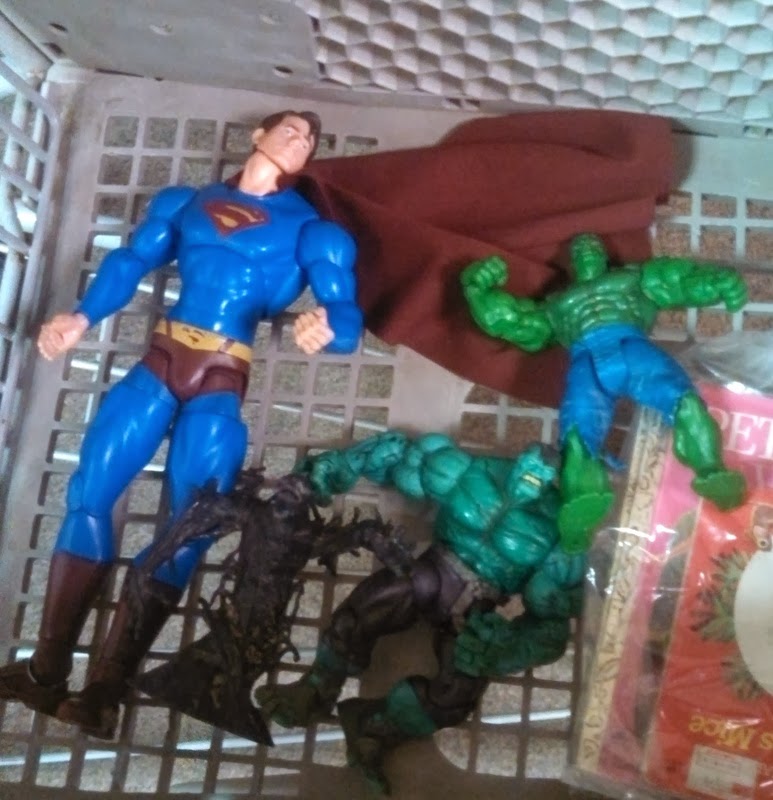 A bunch of cool super-heroes, 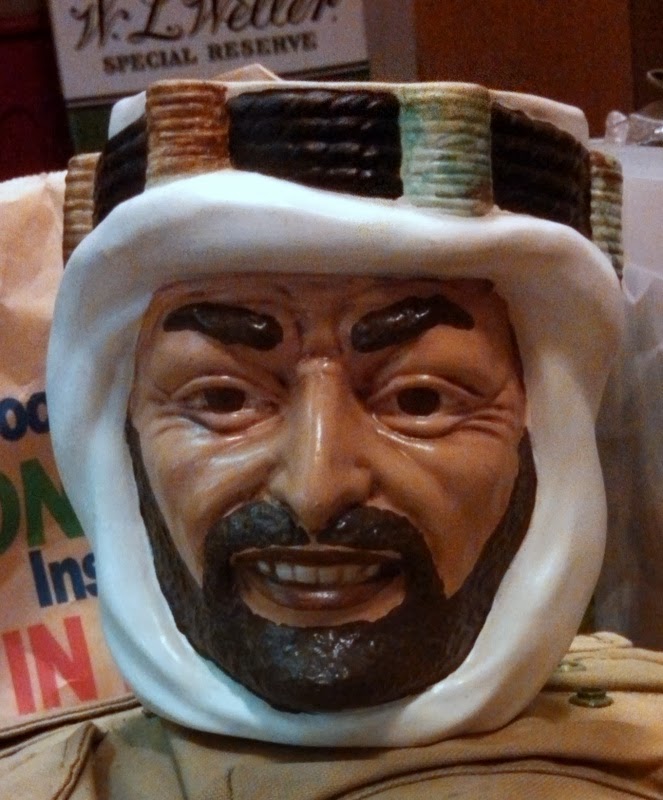 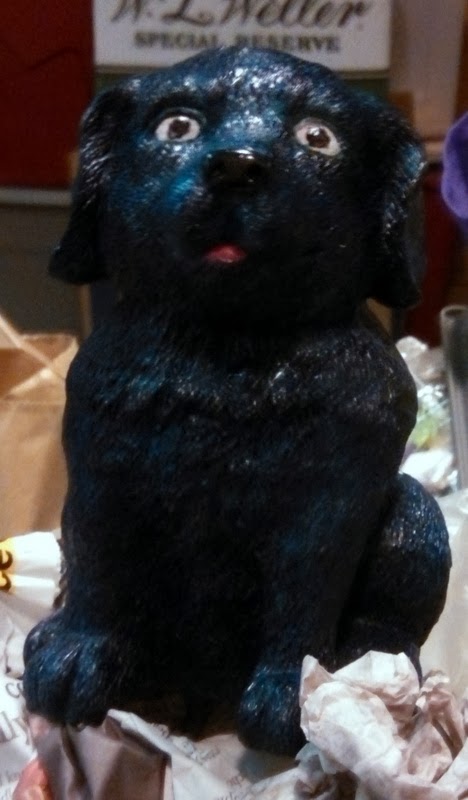 and a cute blue puppy!

A word about my pics.  I've decided to just take them wherever I am, whenever I have the time.  If I can stage or set them up, so be it.  If not, so be it.  The alternative is a frequently pic-less blog, and I don't want that.

Taking that in mind, I'd like to share some finds from a particularly awesome estate sale.  It was in its second day, so I was thinking there would be reduced prices.  Everything was half off, and it wasn't that pricey to begin with.  I filled the car.  Here you can see some of it  going into the Peddlers Mall: 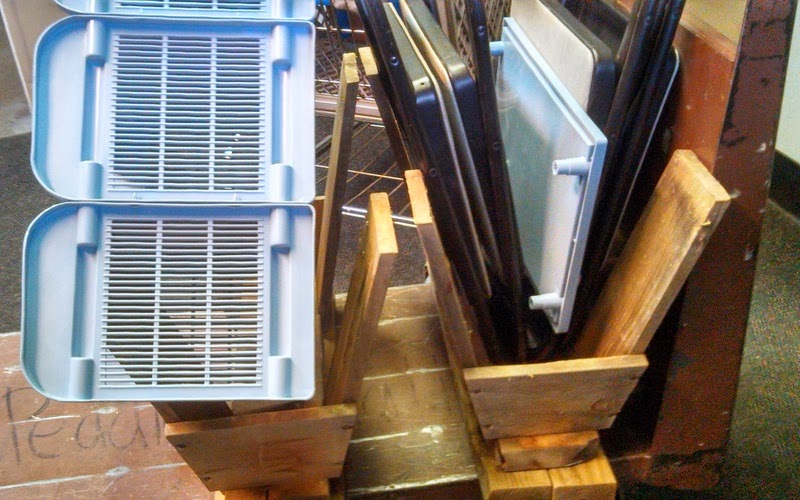 That would be two sawhorses, one of two stacking organizer bin sets on wheels, and four vintage Samsonite folding chairs.  Nothing was over two bucks.  I also picked up a couple of women: 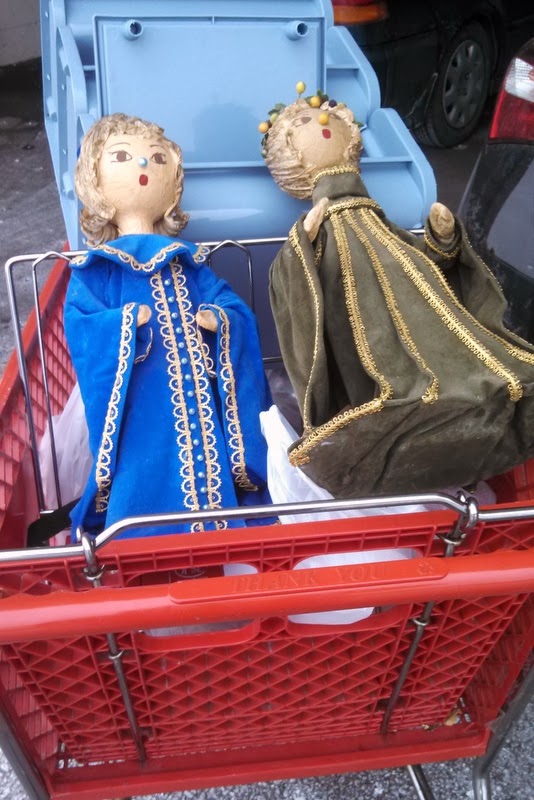 I'm dedicating this pic to Magpie Ethel, because they remind me of some of the things she does.  I'm pretty sure these are hand crafted.  The woman who lived in the house had an extensive craft room.  I'm not totally sure what they are supposed to be.  They have a holiday vibe to them, but they also remind me of Madrigal Dinners.  I'm referring to them as my Madri-gals.  (Get it?)

I did get a terrible shock on Saturday.  My favorite thrift, which is only blocks from the house, has closed its doors for good!  It's really tragic.  It was a good source for religious articles at good prices.  Louisville is thrift-poor as it is.  We can't afford to lose any more.  I'm thinking on wearing black this week in protest.

Holy cow! That is a serious haul! That beats my two bags of beads and four crocheted dish rags...my only purchases so far this year! Don't ya think those ladies are carolers? Weird that they don't match and aren't in traditional Christmas colors. Anyway, that's probably what I'd do with them...jazz 'em up with garlands and such.

Glad I came to mind when you were out in estate sale land. Yep, I think those are hand crafted girls..I am with Shelly on thinking they are carolers. Would have loved to have hit the woman's craft room!

Congrats on the new toilet. We got a new one last year when we redid the bathroom and money well spent!

Anything new in the house is always fun! Perhaps you should consider a Squatty Potty. If you don't know what it is, check out Amazon for a chuckle. We put in a new mailbox, post and all this weekend and you ought to see all of us go out and admire it several times a day. It's a hoot. The old one had a serious lean and wobble situation going on.

Sorry about your thrift. That's like losing a member of the family. My sympathies.

Happy you are feeling better this week - you surely got a lot done, great finds. Very nice upgrade in bathroom.
Joy