Tuesday's trip to the Big Flea was fraught with complications.  To begin with, the alarm I thought I  had set did not go off, so we overslept, making it impossible to get there when the gates opened.  Since we were already running late, we decided to go to a breakfast buffet first, only to find we arrived there right before the buffet closed.

Further complicating matters, I could not get to my Granny Cart without taking a bunch of stuff (and I mean a bunch of stuff) out of the shed to get to it.  Every time I shift things in there, the carts get moved around, even thought I try to leave them close to the door.  Organization will forever be my elusive quest.

Without a cart, I was forced to use a substitute. 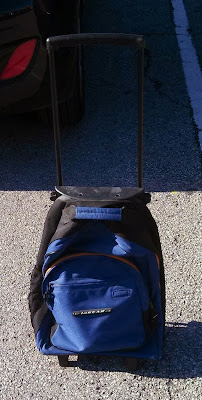 Now, a wheeled backpack cannot begin to equal the capacity of my Granny Cart, so I had to make unloading trips to the car at intervals.

Once we got into the building, it was obvious that we had one final challenge to face, lots of dealers were closing up to leave, even though the flea market didn't close until 5.  Instead of ending on New Year's Day, like it usually does, the Big Flea closed this year on New Year's Eve.  I think it had to do with January 1 falling on a Wednesday.  They run the show for four days and always try to include the weekend after Christmas, so that meant that this year they ended on December 31.  Dealers were excited about the possibility of getting to celebrate new Year's at home, so many of them were closing early, even though the organizers strongly discourage that.

On the plus side, that meant that sellers were willing to deal.  On the minus side, it meant that there were fewer of them there and the number kept shrinking throughout the day.

I only took one picture, because I got busy shopping right away, but it was one of the best things I saw. 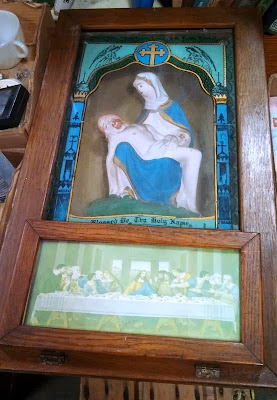 It's an antique Last Rites cabinet.  I fell in love with it, but the seller wanted a bit more than I was willing to pay, based on the condition.  I debated making an offer, but what I wanted to pay was enough lower than his price, that I knew he would not deal with me.  This guy is at every Big Flea and he can be really grumpy and irritable when people try to haggle.  I wasn't in the mood to deal with him, so I went on.

New Years and Labor Day are always special at the Big Flea, because they have the special antiques wing.  There are sellers with antique and vintage in the regular section, but the antique wing brings in 400 more and they always have special stuff.  Lots of them have markdown tables where they try to move out their backstock, estate sale buyouts, box lot leftovers, and anything else they aren't interesting in selling in their stores.  I spend my time looking at the more expensive things and admiring them and learning about them, but my shopping happens on the bargain tables.  On the last day of the show, which Tuesday was, most of the bargain tables turn into dollar tables.

You have to dig through some crap and you have to check stuff carefully for damage, etc, but you can find some great stuff for a buck if you're willing, which I more than am.  For example:


Please pardon my total lack of staging and presentation in my pics.  Laying aside the fact that I totally suck at staging pictures, I was trying to price all this stuff and get it ready to go, so you get my messy desk.  If I let things sit until I have time to stage and arrange, then they'll never get to the booth, which means I never get any money.

I also got a bag of vintage Christmas stuff (for a dollar) that included some gems: 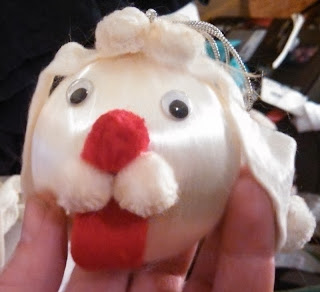 A bizarre little dog thing.  I can't decide if this was made and sold that way or if someone got crafty with a satin ornament.  I also can't decide whether it's too sweet or tacky as hell.  What do you think? 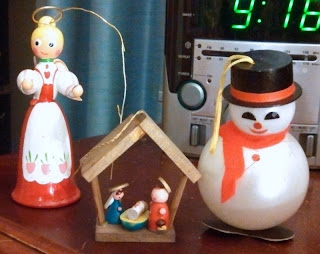 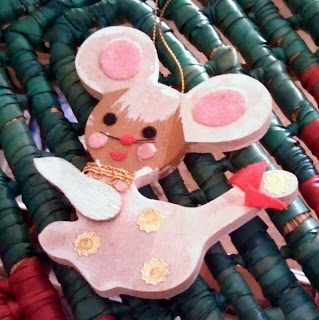 Sweet wooden Japan mouse.  It's laying on top of a basket that I picked up at on dollar booth to carry stuff in while I shopped.  I decided I liked it, so I bought it too. 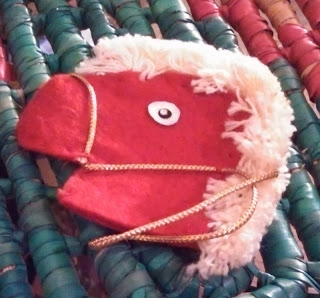 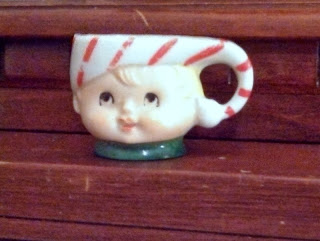 Tiny vintage elf head cup.  I know it's really a child in a sleeping cap, but I'm calling it an elf anyway. 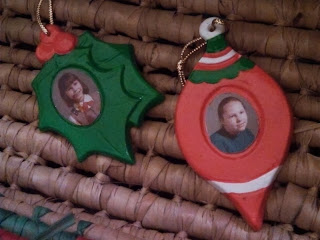 Pair of ornaments with school pics trimmed and attached.  I think they were part of some school art project.  Every so often, you get a reminder of the history of the objects you find.  I wonder if these hung on Grandma's tree for years?

I did get more than that off the dollar tables, but I thought those were the most interesting finds.

I got some other stuff too.  There's always a couple of people there who have yard sale stuff at yard sale prices.  I picked up some things from them, since yard sales are few and far between right now.  I got some price tags from a vendor supplies booth.  They have about the best prices around, and I'm getting ready to do some markdowns, so I need some extras.  I'm going to be marking a lot of stuff down.

I also did find some comic books, which was one of my goals for this trip.  One of my favorite comic sellers was at this show.  I hadn't seen him there in a while.  He always has 50 cent, one dollar and two dollar boxes with good stuff in them.  He also has Golden and Silver Age stuff for good prices.  I've gotten some decent shape, low grade Golden Age books from him for 3-4 buck before.

Interestingly enough, I usually cannot tell the difference between the stuff in his 50 cent, dollar and two dollar boxes in terms of era, content, or condition.  There are a few really ratty books in the 50 cent box, but a lot of the stuff I see could be in any of the three, so their placement seems totally arbitrary.  Unfortunately, a bunch of what I bought was actually for me, although I did pick up a few things for the booth.  You do what you can right?  (I didn't get any pics of my comics haul when I was taking the others.  I might add some later.)

Good beginning for 2014 buying. I found a couple of Ikea bead frames which sell well and a silverplate goblet at a thrift store. This time of year I 'shop the shed and storage room'. Almost time to put the spring garden tools in again.
Joy

I wish we had something like that around here - I would LOVE to go to a big flea market. You found some good things. FYI: The horse head goes over a candy cane to hang on the tree. Happy New Year, Eddie!

You found some good things even though it was probably a pretty long day to do it! Too bad that cabinet was too much - it's the kind of stuff we see in European churches! Glad you enjoyed your day!

Especially love the ice cream image; it resonates in my past.

A fun day and some great things what more could you ask for? I have that little wooden nativity..so sweet and petite.