I'm taking care of a bunch of tasks at once here.  This is the more in depth look at the booth I promised earlier, but it also ties in with the first two questions from Ask Eddie Anything that I want to answer.

"Darn, can't think of a question. Love pictures of your booths so, more pictures???"

"And how much selling space do you have now?"

To start with Donna, I now have five booths, each 8x10.  Four of them are set up as a pair of doubles, which is just two booths side by side.

Let's take a look.  Before we do, let me give a few caveats.  First, the lighting in this place is horrid for pictures.  Bright overhead fluorescents bounce off the white tile floor.  The glare is hideous.  I don't even try to counter that when I take pics.  It's just too much work.

Next, I am not a stylist or a decorator.  I have no talent at this booth arranging thing.  My aesthetic is more "cram it in" rather than "create cute vignettes."  I'm there to sell stuff, not make pretties.  Probably, if I could do the latter, I would do more of the former

There's an aisle that runs across the front of the store, and all the other aisles branch of it to run the length of the store.  Between that aisle and the front wall are a few booths.  This is where the book booth is.  It's a single space, only 8x10.

I'm standing in the aisle, looking into the booth in this shot. 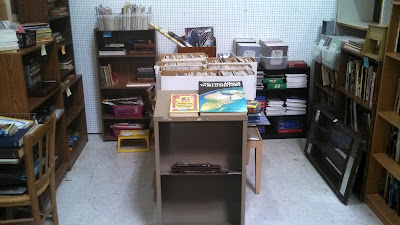 I call it the "Book Booth" for short, but that's more of a theme than a literal definition.  Most everything in the booth relates to that theme, at least in my little mind.  The exception is that vintage curio mirror on the right.  It should be in the Furniture Booth, but there is just no room for it right now.

Things that "relate" to the theme (to me), include the note cards in the black basket and the media items on the shelf below.  Those baskets are in the booth next to me.  I would never put baskets in a book booth!  Except for the black one that I put note cards in.... 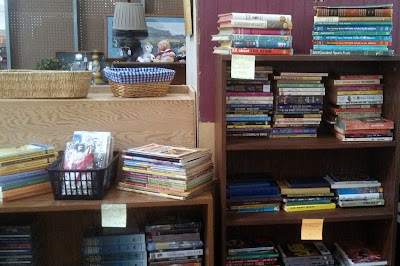 CD's, DVD's, VHS, card sets and card games on the left.  I don't categorize my books, with two exceptions.  One is the manga shelf under the orange tag on the right.  The digest size of most manga trades means they would get lost in a box of comics and graphic novels. 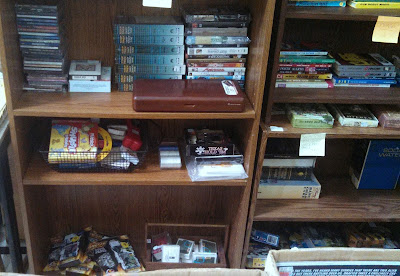 I have previously admitted to my thing for school desks.  The chair was one of my bulk purchases from another dealer when the Dixie store closed.  I got three of those chairs, a bakers rack and a microwave cupboard from her.  That one chair is all that's left.  I've got school binders in the chair because I don't have any other place to put them.  That's kind of a recurrent decor motif for me. 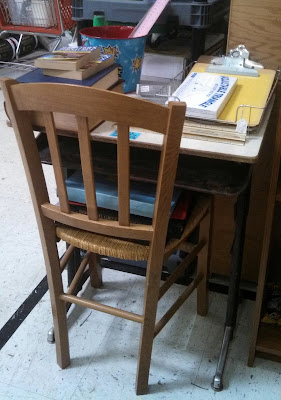 Children's books (tub on top), vintage texts, baskets of ephemera (bottom two shelves), plus a yellow step stool so that people can look in the tub on top without taking it off the shelf.  The stool sold this weekend, so I need to find another one.  The flower basket stands to the lower right hold small books and more note card sets.

I need to find a better arrangement for the ephemera items.  Those baskets just aren't working and the whole effect is just too messy.

The wonderful thing about using tables for display is that you can stash more stuff under them.  I am all for filling every. single. inch. with things to sell.  After all, I am paying rent on those inches.  If I could get away without leaving space for people to walk, I would.  Even the shelving and displays are for sale.  As a wise woman once said "NFS doesn't pay the rent."  (NFS = Not for Sale) 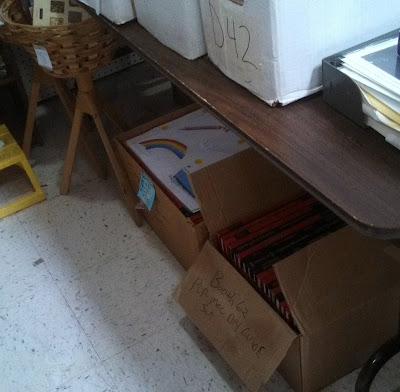 Of course, there are comics.  Would not be my space without them!  I need to bring in a new box of them.  One of the long boxes completely emptied out the other day.  I have some magazines and other odd items mixed in with the comics. 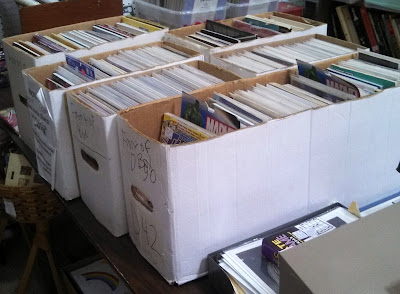 Well, what do you know?  Books in a book booth!  Whodathunk?  Books are very common in flea market booths, so I try really hard not to have the stuff everyone else does.  You won't find the usual suspects here.  No Danielle Steel or Stephen King or John Grisham.  Who's going to buy them from me when they can get them from just about anyone else?  You can see the empty spaces here.  I need to bring some more books in.  They're just in a hard to get to spot in my storage and I haven't felt like hauling all that crap out to get to them.  Plus, books are heavy!

On the left under the blue tag is my other specialized area for books.  You can find cookbooks, craft books, and gardening books there.  Lots of people come looking for them, so I thought it was a good idea to make a section for them.  It's not really a section I ever planned to have, but my mother had a lot of gardening books and someone left a huge box of cookbooks behind at Dixie, which got passed on to me.

I actually do have a third specialized area for books, but it's actually in another booth. 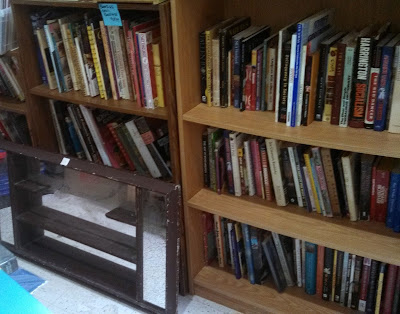 Text books.  One of the continuing education programs gave me a bunch of surplus text books.  I keep them all on this shelf, which I guess is a special book area, meaning that I don't really know what I'm talking about, even in my own booths. 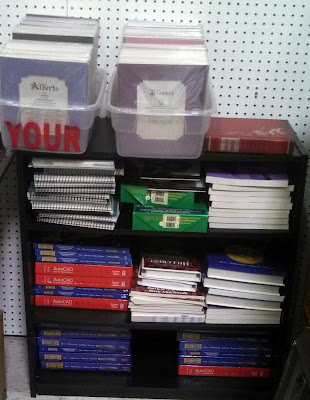 Finally, my annoyance.  Those big, blank, empty shelves are not in my booth.  The booth next to mine put in a bunch of shelves with pegboard backing in their booth, but turned them around backwards.  I'd really not have them there.  If they put merch in there, I'm going to complain.  I do not pay rent for people to stand in my booth and shop someone else's space.

The wrestling figure on the right is the only toy that made it into those pics, but I do keep action figures, collectible card games, and other nerd toys in this space, since the comics are also here. 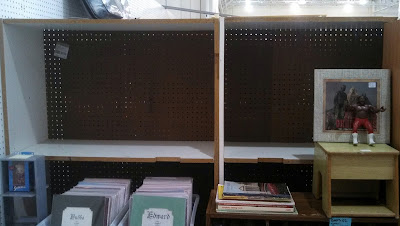 BOOTHS #2 AND 3:  THE FURNITURE BOOTH

Turning around from the Book Booth, you find the Furniture Booth, which I also call the Endcap Booth, because it's a double booth stretching across the end of Aisles 6 and 7.

This is the Aisle 7 side.  Lots of smalls for something called the "Furniture Booth."  I try to limit smalls in this booth to vintage, retro, rustic, classic, and general decor items. 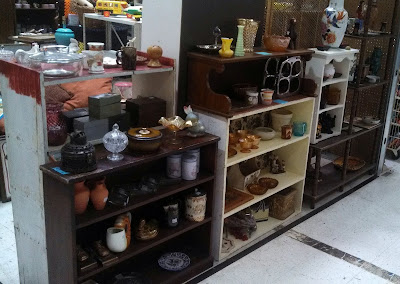 This is my Asian decor section, which is on the Aisle 7 side. 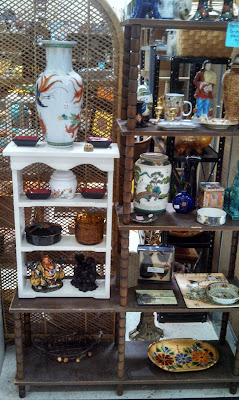 Coming into the booth from the Aisle 7 side.  That loveseat sold right after I took this pic, saving me from having to bitch about the fact that it's still there!  It was a freebie from the Dixie move out, one of the last large items I was given.  I was sooooo sick of it.  Now, I get to bitch about having to fill that space.  Junkers!  We're never happy. 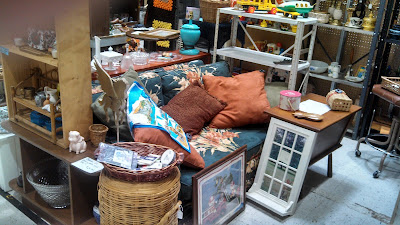 Head on view in the booth.  That unfinished wood shelf is interesting.  It's handmade and held together by wooden pegs, not nails or glue.  I think it was some kind of history project, because there are three names written on it, along with a grade.  They got a B. 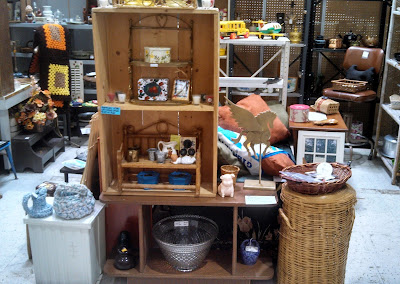 You're probably noticing empty spots here and there.  I took these pics after a few days of my "ain't gonna restock smalls for a while" pledge.  I'm letting a lot of these bits and bobs sell down to make lots of room for more.  I have bunches of smalls.  I sell bunches of smalls. 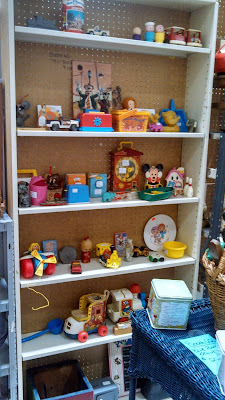 I like to use small shelves to extend the capacity of larger shelves.  Some of my pricier stuff is on this shelf.

These two shelves are sitting on a work table on wheels.  I am debating wheeling that whole kaboodle over into the space where the love seat was, just to shake things up a bit.  I need to ponder that some more, as I'll need to figure out what to put in this spot after the move.

That afghan seems to be photo-bombing every pic in this post! 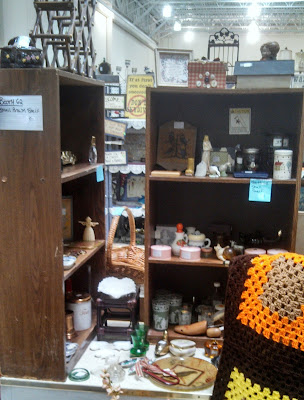 Old metal cabinets are great for displaying magnets!  I never met a small table that I could not stack. 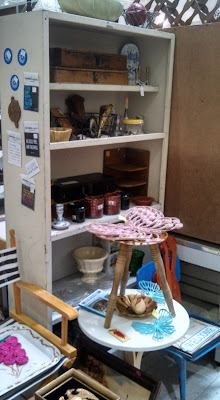 The view down Aisle 6.  More magnets on that metal cabinet.  I try to catch people's eye from every possible angle. 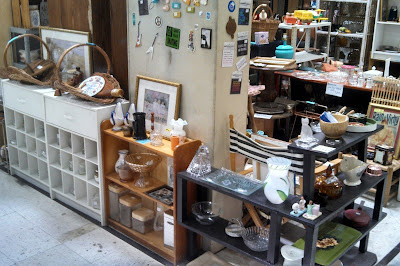 You've gotta use ever nook and cranny! And cubby!  People will look wherever there is stuff.  Not all of them will, but enough do to make it worth stocking every spare inch.  Letting these bits and bobs sell down allow me to shuffle stuff around to fill spots, which moves things into places where they might catch the right eye.  I have been really surprised at how many of my Dixie leftovers sell as soon as I put them out.  Sometimes, all it takes is a new location. 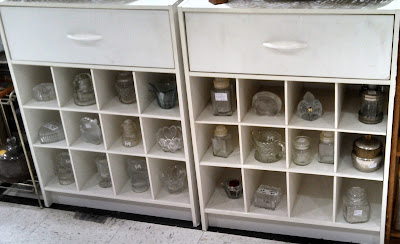 Thanks for posting all the pictures, you have a lot of junk! It's all good though and I can really see how much thought you put into your spaces. Here's to many more sales!

Thank you for all the pics of your booths. I can get a better image in my head when you write about your spaces. I would think the bookshelves with the pegboard facing toward your booth space would not be allowed. It would considered encroachment in our mall. Offenders are charged with an extra rental fee. A wise woman!?! Just one who likes to get all the bang from her bucks.

Eddie, every time you post photos of your booth, I see things I want! Wish you were closer to me. Oh well, I enjoy the virtual shopping. Love the mirrored display shelf, perfect for pretties. You really do a good job and I like a booth that is stuffed and not just vignettes.
hugs,
Linda

Very satisfying to see your booths in detail Eddie. Now I am wondering on how you arrive at a price/s for item/s. I find myself using common sense, online resources and cost of item plus years of being a reseller to do my pricing. Not too high, not too low. Demand/scarcity. Etc.

Fabulous job on the booths! I'd love to peruse them.

Those empty shelves of your neighbors would annoy me. I would probably hang up a curtain (or drop some fabric over it) or something to hide it. You certainly have a lot of space to fill and a lot of items! I wouldn't mine a third booth somewhere, but the idea of making more rent scares me. But, who knows??????

Seeing your booth's brought back good memorie's !! At one time I was in three antique mall's and worked 2 or 3 day's a week at one of them. I got to see what was hot and what was not.
We had a lady with book's, comic's and magazine's, every other customer left with a couple of each. I have 20 or 30 book's I purchased off of her.A lot of people didn't like the booth's that had vignette's, they knew they were going to be pricier item's.People like to dig and root around !! I did some virtual shopping also, the pic w/the binder's- on the desk you had two clip board's and a letter bskt I WANT. Why do you have to live in Kentucky ????? That's too far of a road trip !! Your booth's look great, take a BREAK. Hug's, TT

Your booth looks good, it's full and very interesting. I'd like to come shop there!