Ask Eddie Anything: The Keith Thing

It's a two-fer day!  You get not one question answered, but TWO!   Who says this isn't the Eddie-torial Comments age of bargains and extra value?

First up, Judy asked:  "Inquiring minds want to know.....How did you and Keith meet?"

Keith and I have kind of a long and complicated relationship.  Once I finally came out to myself and the world, I set out on a journey to find my knight in shining armor and ended up stumbling ass-backwards into the love of my life, who'd been there the whole time.

In other words, it happened pretty much like everything else in my life.  That's how I roll, I guess.

We met in seminary (Baptist), where we were both studying.  Keith was going social work degree and I was studying for Christian education.  Honestly, seminary and I were not a good fit, for a lot of reasons.   One of which was the fact that I was trying to deal with some personal questions of identity in a place that wasn't very supportive of what I was realizing about myself.

Keith had been out for years, and had somehow managed to get in anyway.  Never did figure that out, but it was also very risky for him, as he could have been kicked out on a whim.

A mutual friend introduced us.  I was taking a class that required a daily, typed personal reflection, and Keith offered to let me use his computer.  This was in the late 80's, when having a computer was not commonplace.  I ended up typing most of my reflections and other papers in his room, and we got to know each other.

We became pretty fast friends, and were soon inseparable.  It wasn't always an easy friendship.  While we could talk about anything, sometimes things got to close to topics I wasn't yet willing to face up to about myself.  During those times, I would back off for on the friendship for a period of time.  I know I hurt Keith a lot during those times, but he never cut me out of his life.

Eventually, I ended up leaving the seminary, realizing that I had, for my own good, to come out of the closet.  I knew that begin the kind of person I am, that I would not have been able to live in secret, afraid of being found out, so I left.  Keith left about a year or so later.

We started getting active in the local LGBT community, and were pretty much seen everywhere, but always together.  Most people just assumed we were a couple, but we were just friends.  Friends who hold hands.  And kiss each other goodbye.  It was very hard to get a date, trust me.

A couple of years later, we moved in together, as roommates.  During this time, we were internally out of sync which each other.  There were times when he would be wanting more of a relationship, but I didn't.  And then there were the reverse times.  And, of course, we never ever talked about this.

Finally, I started talking about this with a couple of other friends, one of whom said:  "It sounds to me like you're working awfully hard not to be in love with him."  Wiser words were never spoken.

When he and I finally had "the talk" we were walking to a bus stop after some meeting or another.  In my own smooth, suave style, I blurted out:  "I've fallen in love with you."  I walked on a few more steps, babbling about something or another, before I realized that I was walking by myself.  Keith was stopped back where I made my admission, with a dumbstruck look on his face.

That, as they say, was all she wrote.  It's been me and him and a flock of cats ever since.  No looking back.  No regrets.  Thick and thin.  Better and worse.  Richer and poorer.  Sickness and health.  Keith and Eddie.   Seems right to me. 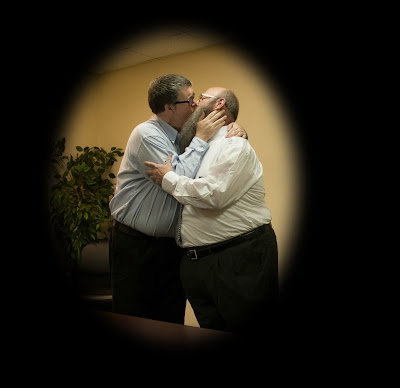 Also tying into this is the question that Roger lobbed at me, inspiring me to do this in the first place:

"Oh, I know. we need to ask you questions, which you would have to answer. Such as, if you knew that Obergefell was going to happen so quickly, would you have waited and gotten married in Kentucky?"

Obergefell, in case you weren't aware, is the name of the Supreme Court case that settled the same-sex marriage question a few weeks ago.

Honestly, I think we would still have gone ahead and jumped the gun and gotten married in December.  For one thing, there were still too many health questions up in the air for me at that time.  For another, the wedding is part of our "two year plan" getting ready for Keith's upcoming retirement.  I think we would have still proceeded down that path when we did regardless of what we knew or didn't know.

I still want to have a local ceremony, if we can swing it. 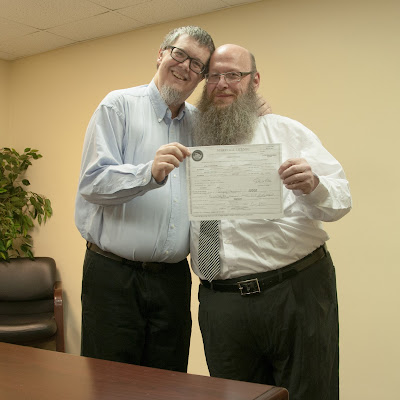 Well, that's it for this round!  We're coming to the end of the questions.  There are only three more to go.

You should write a book - beautiful love story - plenty of angst - happy ending. Reminds me of my niece who came out to the whole family at one time at the annual Christmas party. Everyone looked at each other and said we have known that for years - just waiting on you.

What a great story! Part of it reminds me of my high school dating history - NADA - because my two very best friends were guys and they were VERY overprotective of me so everyone assumed I was a couple with one of the other. My yearbooks are riddled with Good Luck with Andy and Good Luck with Kenton. Hard to get a date when everyone thinks you are dating TWO guys. Glad you and Keith got on the same page and figured it all out. I think the two of you are great!

Interesting how writing your personal reflections and a computer brought the two of you together. And now you're a blogger.

It was love at first sight on my end. I knew i wanted to grow old with you and I reckon we did. And you are still the cutest guy in my universe. I love you spouse for life.

What a wonderful story! I love that you have know each other a long time as friends and then the love part grew from that. Coming out was pretty hard at the time you did it I'm sure but it's nice to be able to be your self isn't it! Hugs to you both, I think you are a great couple!

Thanks for sharing your most personal story. Somehow love will find a way... Go glad you and Keith found your way to each other.