This is what I'm calling my steroid now.

Seriously.  The doctor on Tuesday said I looked like a whole different person!  I'll take it.  I have never been a fan of having to take a lot of meds, but this is really helping.

I made a new friend at the cancer center during my infusion. 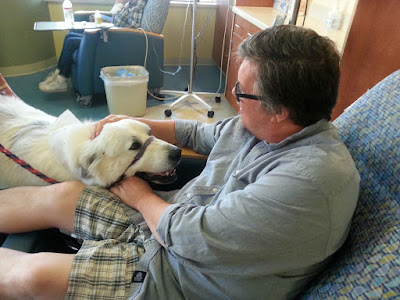 Her name is Lily and she's a therapy dog.  She was a true sweetheart!  She just laid her head in my lap for a long time and let me pet her.  She also got a big kick out of sniffing around in Keith's beard.  Everyone loves Keith's beard.

I think I'm pretty much past the point of emotional distress during my infusions, but spending time with her left me with a huge smile.  In all the time I've been going there, this was the first time I was there with a therapy animal.  It was way cool and I loved it.  I hope to see Lily or one of her friends again soon.

There was a parade of helping hands through the cancer center on Tuesday, in fact.  None of which I have ever seen there before.  Over the past couple of years, I've seen the chaplain come through a couple of times, but that's about it.

On Tuesday, we had Lily, followed by a wandering violinist, followed by the massage therapist (who had a cancellation, so she came to the clinic to see if anyone wanted a quick massage).  I kept hoping the arts and crafts lady would be next.  I haven't made any macaroni art in ages, and I totally rock at macaroni art!
Posted by EM at 9/04/2015 07:36:00 AM

Edddie, I can see how petting a lovely dog would be calming during the infusion! I love how people volunteer to help others like that. You are looking good my friend.
hugs,
Linda

Lily is adorable. They do say patient's blood pressure drop's significantly when service animal are brought in. They're doing it more in nursing home's for elderly patient's. Curious and none of my business , but are they giving you an injection for steroid's or put you on Prednisone ? Glad it's giving you energy , you look really healthy, your color has come back. Not to say you looked lik shit before, you just look better. Haha good luck tmmrw. TT

Great share Eddie. Brings back memories. I got to pet the therapy dog once during a treatment too. A very long pet. It helps. Legs look great. Have you been out in the sun a bit more? Music does make a difference too. Hugs.

When my Mom was in Rehab, there were different dogs that came every week. My Mom had a lot of dogs at home and she was really missing them, so it helped her to be around them. Gld you were there when they were - or maybe visa versa.

What a beautiful dog! So nice to have a sweet furry friend visit you during your treatment. That's awesome!

Love that your doctor thinks you look like a different person - I hope he has not confused you with another patient. I have to agree you look better than you have been looking - quite snazzy sporting the plaid shorts - uniform of the South. Therapy dogs do a great service. I think i will go find my mother's little helper and get mellow.

What a nice feel good post. I would love to see your macaroni art...perhaps I should show up...I am rather arts and crafty.

What a nice feel good post. I would love to see your macaroni art...perhaps I should show up...I am rather arts and crafty.

...and WE look forward to seeing your Macaroni Art!! 'The arts' are always better when some Good drugs are involved (so I'm told - ha!ha!). BE WELL my friend!