Happy Labor Day Everyone!  I hope everyone has had a safe and happy holiday weekend.  The last blast for summer, as it were.

It's the last day of the Labor Day Big Flea, so I'm heading out and looking for some bargains in the Antique Wing.  Plus comic books.  Plus whatever else I can find.

It has been ungodly hot here this past week.  Saturday was the worst.  Just awful.  It really killed the business at the sidewalk sale, unfortunately.  Even though the sidewalk outside the Peddlers Mall is covered, the shade doesn't really take effect until mid-afternoon.  It was a roasty, toasty morning.

The real problem was that no one wanted to linger outside and shop when they could go inside and shop in the air conditioned comfort.  And I did not blame them.

Still, fun was had.


I did sell a lot of stuff.  When your top price is a buck, things do move pretty quickly for you.  I wanted stuff gone and it went, making every hot sweaty minute worth it!  Towards the end of the day, I corralled a shopping cart and dumped some stuff in it with a big FREE sign on it, and even more stuff left.

I'm going to take the leftovers, dump them in some large bags, and put a really good lot price on them and blow them out of the booth.  (Those plastic zipper things that linens and sheets come in are wonderful for this!)  A few of the larger things will get another mark down and then get shoved in a corner to fill space until they sell.

There's about a trash bag full of stuff that's headed to Goodwill as well.

The only thing that did not move at all was that damn glass.  I'm leaving it in a box, shoving it on a bottom shelf, and letting it sit until my yard sale at home.  Diggers will hunt through it, if they want.  Everyone else can ignore it on the bottom shelf as easily as they do when it's out in the open.

The sidewalk sale was part of a special event to raise funds for one of the cashiers who is going through chemo and can't work as much as she usually does right now.  There was a bake sale, raffle, and cook out, with all the proceeds going to her.  It was pretty awesome!  A pair of customers out of the blue made a fifty dollar donation!

Sales inside were really brisk this weekend.  Saturday, I had my best day ever at the mall and came within a couple dollars of my best one day total ever.  Friday was super too.  On both days, I sold a ton of those manga volumes.  A serious ton.  I gotta get my hands on some more of those.

I was actually worrying about September, because the first three days were way off.  Now, I'm way ahead, so we'll see what's going to happen.

I have all my Halloween out, right now.


It's not quite blog worthy at the moment, so this is the only peek you get right now.  After a bit of tweaking, I'll do a full reveal.

Oh, all right.  One more little look.  Just because you've been good.

I haven't sold a lot of it as yet (or the fall decor stuff), but it's starting to pick up.  I think it's hard for people to think acorns, scarecrows and pumpkins when it's so freaking hot.

I'm still doing really well on the steroids.  I did learn last week that I really should still take treatment day and the day after to rest.  I wasn't overly tired, but I did move much more slowly than I had been doing.  I'll be keeping that in mind.

This week, I'm planning on taking a few days to totally chill.  I need to spend a couple of days at the booth to put it back together after the sale, but I'm taking the next 3-4 days after that off.  Since starting on the steroids, I've finally been able to get to some things that needed to be done, so I can take some time to do nothing and not feel so badly about it.

Last week at the cancer center, they added something new to the free snacks.

I love me some Lorna Doones!

Like I said before, the doctor thinks I am looking much better, so we're both happy.  It's time for another scan, which I'll get next week.  We'll go over the results at my next clinic visit, the week after.

Due to the sidewalk sale, I didn't go to any yard sales, but I did shop a couple of the other sellers and picked a few things up.  I'll do a post on them (plus any Big Flea finds) later on.  Late last week, I found a bunch of Libbey jar style drinking glasses in various colors on clearance. 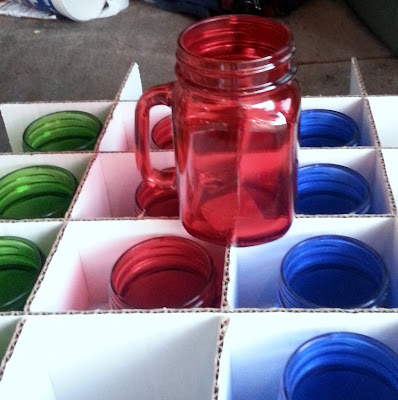 I know these are supposed to evoke images of drinking iced tea and lemonade on the back deck on summer nights, but I look at that red and green and think "Egg Nog!"  The red and blue also make me think about the Wildcats and the Cardinals, as college football gets started.  These will be in the booth this week.

This coming Saturday is the community sale for our neighborhood.  Everyone sets up on an empty lot, and there are always lots of good finds.

It's time to get the granny cart out of the shed and start my Big Flea warm ups.  If you don't stretch and properly prepare, you could hurt yourself, you know.  Junking ain't for sissies!

Let's close out this ramble with a picture of a blue-eyed ape riding a tiger!

WOW on the sales successes! Good to hear that the steroids are giving you back your zip. My Sept. Is running about the same as my usual so far. I am putting in the beginnings of Halloween stuff and just a few Angels just because they are so pretty. Hugs.

People around here keep saying the same thing over and over..."I can't wait for fall." So I think they're ready to buy scarecrows and pumpkins in the hopes that it will bring the cooler temps that much sooner. I sold some Halloween greeting cards on ebay and I just listed a Pottery Barn stocking and a Bombay Company tree skirt in the hopes that those early holiday shoppers are ready to start buying. How wonderful that everyone pitched in to raise money for the cashier and I'm so glad your treatment is going well. Get that important rest. You need to be strong for the Big Flea!

You're a nut. I love it. Those glasses show you are a true junker. You gotta think out of the box and sell things meant for one thing as another thing. Sounds like you are feeling good and busy, busy, busy. I could use a boost of extra energy- the junk ranch is coming fast and I am no where near ready. But, it will get done. It always does, somehow! Happy holiday!

Yay for the good sales...Boo for the hot weather. It is hard to think Fall isn't it. I saw a cute Hello Kitty in your Halloween stuff...my girls loved Hello Kitty growing up and well I still do! :) Glad you are feeling good!! Enjoy your Labor Day!
hugs,
Linda

Love that pic of you at the sale. You are looking great! Steroids are the bomb, but yeah, listen to the body, and take it a little easy after treatment (Mom mode off).
My hubby has been in the Colorado mountains hiking, and he says the trees are beginning to turn so yes, fall is coming. I actually listed some stuff on Ebay this week thinking that people will be in shopping mode and am off to list some Christmas stuff now.

Sales have been great for us too. I keep waiting for the plunge! Off today to get the booth decorated or fall. Everyone needs a blue-eyed ape riding a tiger!

August would have been really slow at my booth if I hadn't had 10%. I ended up making quite a bit more than I usually do. So far this month is starting off okay. I decided not to hold another 10% off sale, as the numbers were pretty good the first 6 days when I called them Sunday. Hopefully yesterday helped. The mall is usually busy when it's blistering hot or chilly. It's dead when it's raining or snowing horribly. In October I'll get out my Christmas! I can't believe it's almost that time!

People can do more than they ever believe they can do. Physically, mentally, academically. You have to be pushed. It hurts. But it's worth it, and it's a great thing. See the link below for more info.