Lots of stuff to show this time, so buckle your seat belts.  It's gonna be a wild ride!  I'll try to keep the comments to a minimum, but you know me.

First off, from the Sidewalk Sale: 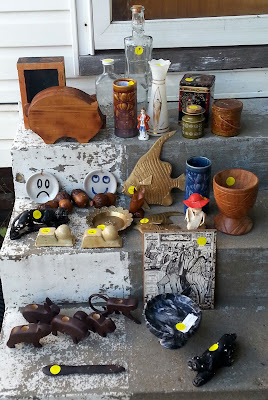 The yellow dots are the price tags from the sale.  I haven't had a chance to log all this yet, so I've left the tags on.  I got all this from one vendor, who was clearing out his stock at the sale.  His prices were great!  Even better, I picked up all this after he went to half-price.  I ain't stupid!

The wooden piggy bank has a cork in the bottom.  The smiley/frownie saucers are Hadley Pottery.  The white vase on the top row is from the Shrine of Our Lady of the Snows.  Just good stuff all the way around.

There were a couple of larger items that I put right in my booth:  a vintage Last Supper pic, a woven bottom child's chair, a wooden trash can, and a vintage wooden magazine stand.

These are just the highlights.  I left out the DVD's, manga, modern toys, and books for brevity's sake. 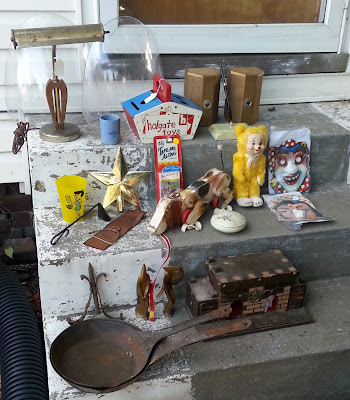 I think you can kind of see the plastic shield looking things on the top step.  They were just odd enough and just cool enough to attract me.  The Holgate Toys block sorter has all the blocks with it.  The Snoopy pull toy in the middle of the second step is the only thing I got from that 5 buck F-P table in yesterday's post.  The paper masks on the end of that step are from the 60's.  The castle jewelry box is in rough shape, but it has loads of charm.  I can see someone with talent spiffing it up nicely or giving it to their kids as is to play Legos with it.  The pans came from a dealer I really like because he's so easy-going.  He finally decided to start making a dollar table on the last day.  Yay!

I'm kind of ashamed this photo is so freaking bad.  Forgive this bad lazy blogger.  The glass pieces on the first and second row were the last minute treasures I got mentioned yesterday.  I am kind of obsessed with that lady head on the lower right.  The F-P clock came from the new dollar table dealer above.  It's filthy, but it works.  (It's in better shape than the one from the five buck table.)  The white cups are Disney, but I turned them the wrong way when I put them out.  (Ack!)  The red thing on the top step is a vintage Mickey kazoo megaphone, which rolled over before I got the pic taken.  (Double Ack!)  The Hulk bowl and cup are from the late 70's.

As for those funky feet at the top left, they belong to these two candle holders.

I got them through the time-honored game of "looking intently and expressing interest enough to catch the sellers eye, but walking away for a suitable length of time, then coming back and getting offered a lower price from the seller."  I love that game!

Of course, there were comics.  This is just a selection.

Comics for the booth. 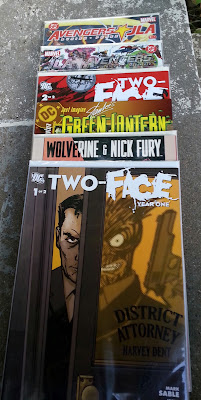 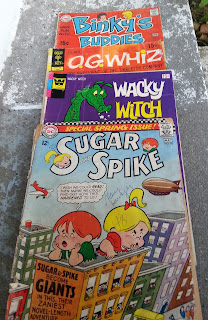 More for me.  I might have that Hercules comic, so it will go the booth in that case.  I used to be able to remember everything that was in my collection, but that was a long time ago.

This one is pretty much regarded as one of the oddest comic covers ever. 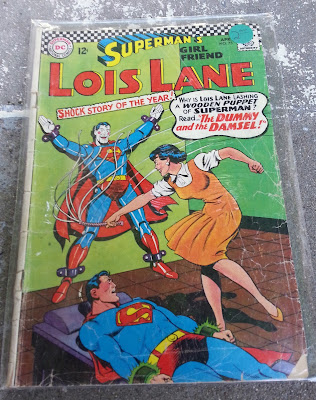 Let's take a closer look at that caption. 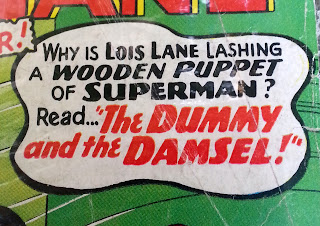 One of my fave comic finds four me were four more issues of Treasure Chest.  I have been slowly but surely building a collection of these things.  I think I may be the only person in the country collecting these.

I plan to do a post on these babies sometime in the future, after I've had a chance to get some scans of some of the really awesome covers.  Briefly, these were published for distribution in parochial schools on a weekly basis from the 50's to the 70's.  They contain religious stories, Catholic doctrine, and wholesome serialized adventure stories featuring wholesome boys and girls as protagonists, jokes, games and other stuff.  I'm most interested in the Catholic angle, of course, but the other stories are solidly written and well drawn.

Due to the serialized weekly nature of the stories, it's hard to read one from beginning to end.  I'm starting to get good chunks of stories gathered together.  These are my main comic collecting obsession right now, along with 60's romance comics, and Classics Illustrated.  If anyone ever runs across any of them, let me know.  I'll gladly pay for them. 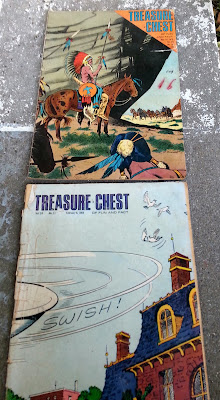 BONUS:  Stuff from junking with my uncle yesterday.  I had intended to go to the booth yesterday, but he texted and asked if I wanted to go with him.  Since that was the first time he ever texted me, I felt like I should go.  We had fun and found some stuff. 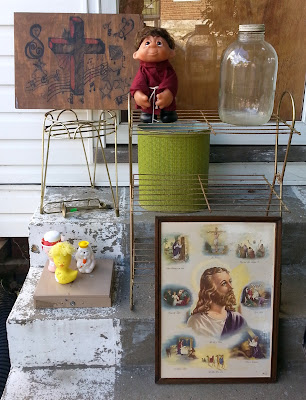 Believe it or not, I had to be talked into getting that folk art with the cross and music notes in the upper left.  My uncle kept saying that I'd never find anything like that again.  I'm glad I finally decided he was right.  I've been needing a big glass jar to make a junk jar out of, but have been having a hard time finding one. I love the Jesus print, which is dated 1942.  The troll monk doll was a no brainer.

You got some cool junk and lots of great comics! I think the monk is my favorite for some reason! Great fun looking at your treasures!
hugs,
Linda

Lots of cool and interesting things. When I went out yard sale-ing this weekend in my best friend's home town, her parents were there too. Her dad went out with me. He actually talked me into buying something that I was going to pass up! So glad he talked me into it, because it was be one of my best profits to date! A guy was selling milk bottle caps for 50 cents each. It was a fairly large box. I thought there might be 400-500 in there. He said he'd sell me the whole thing for $50. I actually walked away! I was thinking there just wasn't enough profit to spend the $50. And the guy wasn't coming down on his price. Looking back - I don't blame him! Then my best friend's dad was like, "Melissa, even if you sell these at 25 cents each you'll probably make a hundred fifty bucks or so." He had started counting them up. I couldn't argue with him. Making 3x what you spend on an item is a pretty good return. So I bought them. Well I waited until Monday evening (out of holiday weekend laziness) to count them. I expected to come back with enough to make $150-$200. There were over 1300! If I sold at his prices, I'd make over $600, or 12x what I spent! Even selling them at my normal price of 25 cents each, I'll make over $325! I texted my best friend's dad to let him know I how happy I was that he talked me into it!

Are you sure your just taking steroid's......??? You are a happy quirky back to business Eddie, I'm so happy for you that you put me in a good mood !!! It look's like you made some real scores. I do love hearing the enthusiasm about your comic's, the title's kill me !!! I saw the red branches in your shopping cart and thought, what the h*ll ? But I'll tell ya what, I'd buy them in a heartbeat for Christmas or anytime. Now I have envy :(( Have a wonderful day !!!! TT

I love seeing what you found plus the commentaries to put the stuff into current context.

Lots of good things as usual! The teak animal candle holders look like they could be something special.

Treasures galore! I adore the weird candlesticks! They have a definite Halloween vibe to me. I would paint them black. Wish I was closer, I'd nab them in a heartbeat.