A funny thing happened on the way to the forum.  I've hit  800 posts and I didn't even realize it.  At least, that's what my Blogger totals say.  Wow.  That's a lot of posts.  And it only took me ten years to get here.  (You hush, Roger!)  I was so absorbed in setting a posting record for this year that I didn't even notice my grand total.

Chiquito and I are having space issues.  He's decided that one of the places he wants to be to get his head rubbin' lovin' is on the keyboard tray of this desk.  It's no big deal when I'm surfing through YouTube, but it really becomes an issue when I'm trying to work on something.  He does it like seven or eight times a day!  I've started putting him down when I'm working, but I'm worried I'm breaking him of the habit.  I don't want him to stop.  I just need to claim some work space!

My worst fears about this month were realized last Thursday when the State Fair started and sales at both sites plunged into the toilet.  August is always such a crappy sales month.  Friday was weak too, but, then the weekend comes on like gangbusters!  Strong sales at both sites on Saturday and Sunday!  Maybe this month isn't out for the count, after all.  School starts this week, so we'll see.  I've had a lot of sales out of my back-to-school display, though.

You know what's weird?  I'll tell you what's weird.  I had two sets of Winnie the Pooh (one of my "Five Guys") figures for sale.  These were the large cardboard figures that are used to decorate nurseries and classrooms and such.  There were four in each set:  Pooh, Tigger, Piglet, and Eeyore.  I priced them individually, because I have this weird quirk about that.  Maybe I'll write about that some time.

On two different days, most of each set sold--everything except for Piglet, both times.  If they'd sold one at a time over several days, I wouldn't have noticed.  If one had sold completely and the other sold partially, I wouldn't have noticed.  Two separate sales, which I am assuming went to two different buyers, that leave the same character behind?  That, I notice.  What do people have against poor little Piglet? 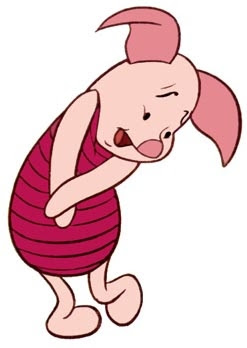 It's going to be a busy week.  I'm not working regularly right now, but I've got a bunch of meetings about work and some training for the gig I start next month to do.  I should still have some time for blogging, boothing, and working on some other projects, though.
Posted by EM at 8/20/2012 05:00:00 AM

But you were thinking it!