I managed to edge my post total up to 160 last month, so I've got three months to do 40 posts and make my 200 goal for the year.  It's looking more and more doable all the time.

Oh Lordy.  What have I done now? 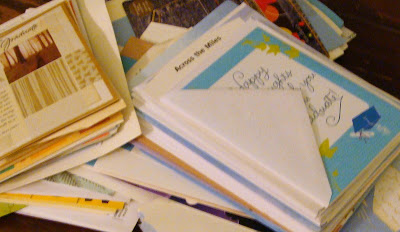 And this is only a very small part of it.  I just grabbed a handful out of one of the boxes for a pic.  I have five boxes of this stuff, and innumerable bags.  I bought out the stock of a vendor who left and now I'm swamped with cards and nick nacks.

It's all Hallmark, though, so I'll make good money on it.  Sadly, no Xmas ornaments.  Still, I got this stuff mega-cheap!  Some of it will have to go into storage for the appropriate holiday, so I have got to get it all sorted and priced first.  It's a never-ending journey!

This is a crazy, crazy week.  My Tues-Thurs afternoon gig wants me in on Mon and Wed as well, so  I'll be there.  Extra hours mean more dollars but less time.  However, my Friday morning gig ain't happening this week, so I'll get a bit of a breather there.  I've got posts slated for most of the week, so be sure to check in here.

I've been running low on books at the Peddler's Mall.  My new book table was half empty, and all of those were old books that I put on it so that it wouldn't be all empty!  I rectified that with a mass purchase of fifteen boxes of good stuff.  I'm going to be set for a while.  The best part is that I'll be able to put them out in "themes" for a while, since I have lots of books on certain topics now. I think the first theme will be hymnals.

I'm already having a pretty good run on the killer Halloween display.  Several pieces have sold already, including many costumes from the tub, which makes it less obnoxiously full.  I have a few last bits to put out this week and then I'll let it run.

I sold 73 dollars last Friday.  Wish I could have days like that all the time.  It was a bizarre combo of Halloween stuff and religious books that makes me wonder about the world.  Sometimes, I like to imagine that everything I sell in a given day was bought by one person.  Then I try to picture who that person is.  It's an interesting game.  This time around, I'm conjuring up a bizarre mix of Mother Teresa and Aleister Crowley.

I'm in a real good spot with stuff overall right now, so, other than some clearance gift items and small thrift runs, I've not done any heavy saling lately.  (Except, of course, for the big buys above.)  I did go to a sidewalk sale at my fave comic shop on Saturday.  I'll have more to say about that later, when I've got a chance to write it all out.  I do have to say right now, though, that it's been a long time since I've been a part of a nerd herd when it's converged on quarter comic boxes.  Thankfully, it's like falling off a bike. You pick it up pretty quickly, once you get thrust in the middle of things.

Ever notice how good a simple veggie burger with a slice of cheese on a nice whole wheat bun with a ripe slice of tomato and some leaf lettuce and a dab of spicy mustard tastes?  Mmmmmm....

And, finally, an open letter to an asshole:

Dear Asshole Who Thought It Would Be a Good Idea to Try and Rip Me Off at the Grocery While I Was in the Potty,

Do you really think I would leave my backpack in an unattended cart if it weren't empty, Dummy?  Seriously.  I had it there to put my damn groceries in.  Asshole.

Roger Green sent me here. I am laughing out loud at your letter to the a-hole.

I once saw a perfectly healthy man without any Handicapped ID on his plate or dangling from this visor park in a Handicapped spot. I told him nicely, "You probably didn't notice, but..." etc. He flipped me the bird. I called after him, "Don't forget to buy cold cream!"

He looked puzzled and went into the drug store.

I whipped out my bright red lipstick and scrawled "ASSHOLE" on his windshield.

This was before the medications, understand...! I loved this post.

Thanks, Amy. Welcome. And thanks to Roger as well. He's a cool guy.