Well, I spent some time last week totally cleaning out and revamping my Blogger drafts.  I pitched some things that were never going to go anywhere and dated everything else for 12/31/12, so it will be at the top of my post list and I will remember to finish it.

I found more posts than I remembered having that were basically done, except for a little tweaking and a photo.  This week is a light work week for me, so I think I'll be able to work on some of those.  At the very least, I'll get some special Christmas things done and on the schedule.  That 200 post goal is really coming close.  (And, yes, I know you all are tired of hearing about that.)

Part of the problem I have with working in advance is that I never know how far is too far and when to stop.  I've also never figured out exactly how to make good use of the "cushion" once I've built it up.  I tend to get about a week ahead and then blow the intervening days by not writing at all until the posts are about to run out.  I wish I had a steadier pace.

It's good and fall-ish now here in the Ohio River valley.   I had to dig out a jacket last week.  I love this time of year, as the leaves turn and fall and the temps drop a bit!  It means my birthday is on the way!  I'm not sure how it happened, and it's probably totally my fault, but somehow my Facebook timeline said that my birthday was last week.  Actually, it's not until next month.  I appreciate the well-wishes from those who sent them, however.  I guess I will have to fix that, some day.  It's probably a good indicator of my attitude toward Facebook.  I'm only reluctantly on there. I really don't care for it that much.

We had a good weekend for yard sales Saturday and it resulted in some good buys.  I ended up making a dumpster dive at a church that was selling off its library books and equipment.  I realized that they had already been pitching stuff when I was checking out, so I headed to the dumpster to see what was what.  I salvaged a few items there, with the help of a pole from a tent Keith had  bought earlier.

Perhaps the best find of the day was another "love connection." 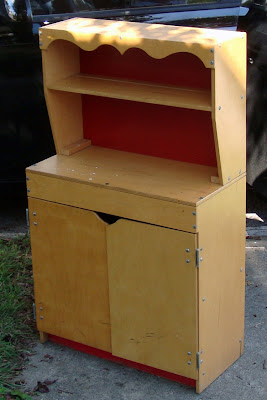 It was part of a set that included the play sink and stove, but the other pieces were missing parts.  This one needed a couple of wing nuts to steady the top half, but that was an easy fix.  The doors on the bottom don't meet evenly, and I cannot figure out why.  All of the hinges are tight and nothing is sagging.  That hits the limits of my abilities to fix things, so I'm hoping the rough room shopper who finds this gem will know how to fix it.

I also went to yet another sale at the local comic shop.  This time they had their 8 p.m. to Midnight special 50 cent comic sale.  I went looking for more expensive items I could turn around pretty easily.  Yes, I ventured back into the nerd herd for a second time in a week! I stayed until I had met my budget and my tolerance level for the herd, which happened at about the same time.  I did end up with some good stuff that will sell well for me.  I think I tend to get people who don't necessarily even know that there even are comics shops, but that are kind of interested in comics when they see them.  This makes comic shop sales a good place to look for stuff, without actually being my direct competition.

Sales were surprisingly slow everywhere last week, but picked up at the Peddlers Mall over the weekend.  I guess everyone was in a beginning of the month slump or something.  I am just about out of Halloween make up, party favors, and costume accessories at the killer Halloween display.  I have a few small things to put out today, and I'm going to condense it and move all the fall and Thanksgiving items over to one end of that table.  I need to move a few more costumes and decorations, but there's time.  Still very little in the way of skull sales. which puzzles me.  Has this town reached the Skull Saturation Point?

I was disappointed to learn last week that I could not put up a sign in my booth addressing customers who pull things out of bags as "fuckwits."  Maybe it was my anger at finding all the pieces from one of my more expensive costumes strewn all over the booth, but it seemed reasonable to me at the time.  Now, of course, I realize that those who do stuff like that are most likely not customers of mine, as I highly doubt they actually buy anything.  It's one of the hazards of selling in a large, indoor flea market, I guess.   But how am I going to sell a brand new costume that now looks like it was used because I cannot get it nicely in the bag like it was?  Grrrr......  Not happy!

The central lesson of the weekend was yet another manifestation of the cyclical nature of junking.  One year a sale can be seven kinds of fabulous, and the next, just the opposite.  One of my favorite sales of the whole year was such a bust that it almost wasn't worth going to.  Disappointment does not begin to describe my feelings.  It's only the sale where I made the most awesome religious buy of all time.  Sigh.

Are you allowed to say fuckwits on the internet? o_O

Where do you think I learned the word?