I've included a post-surgery shot of the scars and stuff at the end of this post, so be forewarned that it's not pretty.  I'm going to try and hide it behind a jump, so we'll see how that goes.

I'm writing this on Thursday and Friday, for posting on Saturday.  I've been home since Wednesday, trying to get up and around a bit and take care of some things.  I still seem to tire out pretty easily, though.  I'm also covered with incisions and such that I'm worried about keeping clean and not infected.

There's not much to write about the surgery, because I don't remember any of it.  The last thing I recall is being transferred on the the surgery table and being told to breath deeply.  The next thing I remember is feeling groggy and painful.  It must have been a hell of an event, though.  I've got this huge-ass scar with a ton of staples in it.  They're telling me it took five hours, too.

Apparently, there was some kind of slight misunderstanding or misinterpretation somewhere along the line, however.  I kept hearing terms like "skin flap" and looking at the areas concerned, and kind of had the idea I was looking at a small-ish scar.  I look like freaking Frankenstein Junior!

I have in incision running down the right side of my neck and up behind my right ear, which is swollen to about twice its usual size.  (But is starting to go down some.)  Most of the scar incision his held together by staples, but I have sutures around my ear.

A large part of the right side of my face is numb at the moment, although the feeling is returning in bits and pieces.  There's a chance it might not all come back, due to nerve issues caused by the surgery, but it's too early to tell anything about it.  The parotid gland that was removed runs around a key facial nerve, so I was looking at the possibility of serious facial paralysis.  Fortunately, that part of the surgery went really well.  The right side of my lower lip is a little wonky at the moment, but that is supposed to clear up without any lasting effects.

So what happened during the surgery?  Well, apparently, one big-ass slash on my neck, to begin with.  They removed Nigel and Sixtus, plus the gland Sixtus was sitting on, plus a crap-ton of lymph nodes.  All of that stuff has been sent for pathological testing to see if there is anything else we'll need to do in terms of treatment.  I've also got two ports in my chest that are draining even as I type.  I am supposed to get those removed next week. Right after that, I'll go back to work.  I was supposed to go back Monday, but I have no real way to hide these ports and the bulbs they drain into.

Anyway, I'm still resting a lot, taking anti-biotics, and pain meds, and trying to get my groove back.  It's slow-going, but I'm not feeling as badly as I thought I would at this point.  I'm going to try to blog more until I go back to work, as I feel better and better.  (Pics after the jump.)


So anyway, here's a pic that I think is safe for everyone, just so you can see that I am receiving the best possible care.  (Yes, that is a Sailor Moon blanket and an awfully large, teetery stack of books on my side of the bed.)

And here is the other pic.  Post-surgery me in all my groggy, glory.  Not for the faint of heart! 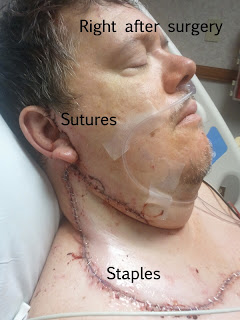 Hi Eddie - glad to see you posting again. Yeah, surgical drains were invented by the devil, I think. I didn't think your picture looked too bad considering that you are not even a week post-surgery. So glad you are feeling better day by day. Keep up with those pain meds - you need to stay as pain-free as possible as your body needs all of its energy to heal. Glad to see you have Nurse Kitty on duty too!

Am really glad to see your post, too! I have been checking hoping to hear about your experience and am glad you are up and about some. I'm thinking of you and hoping your recovery goes quickly.

Wow Eddie and bless your heart. I hope you heal quickly and everything is good as gold soon. You are a great person and I have thought of you often this week. Glad you updated. Get all the rest you can and hit the junkin' trail again soon!

Being home in your own bed with Dr Kosh is the best medicine. I hope the tests show that they got all the bad stuff out and that your road to recovery is smooth and speedy.

I'm glad you are feeling better, please let me know if there is anything that I can do.

Oh, Eddie. I had no idea it was going to be this big of a surgery. Sending positive thoughts for a speedy recovery!

Sue (Vintage Rescue) said...
This comment has been removed by a blog administrator.
12:02 AM

Sure was glad to see your post and hear a glimmer of that humor always so at the ready in conversation with you. That tells me you're on the mend. Well, that and the stack of books at your side. Nurse kitty is pretty special too! So protective. My thoughts and prayers continue to be with you and I hope Wednesday and the days that follow bring you nothing but eliminated drain tubes, removed sutures and staples, and a very speedy recovery! Hope to see you soon at the store! K