Read yesterday's post for an explanation as to where this is coming from.  I don't feel like retyping it.  My interest in religious imagery stems from stuff like this: 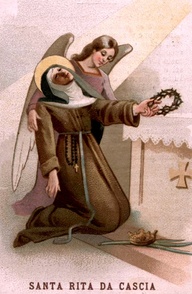 Good old St Rita.  There is so much in this pic that just flat turns me on.  (Not that way!  Behave!)  There's a nun (which St Rita was).  It's loaded with symbolism.  (See the Crown of Glory and the Palm?)  It's totally overwrought and emotional, which is intentional.  These images are designed to provoke an emotional response.  They certainly do in me, although not necessarily the one intended.

Finally, it harkens back to the hagiography of the Middle Ages,  which is chock-full of all kinds of awesome pious legends and tall tales.  (I cannot tell you how much those turn me on!)  The scene depicted here is Rita becoming implanted with a thorn from the Crown of Thorns, which lodged itself in her forehead and stayed there for the rest of the life.  Most images of St Rita depict this scene, often with her kneeling in front of a Crucifix in prayer as a thorn shoots off of it and heads towards her.  (Seriously.  Now do you see why I love this stuff?)

Rita's whole story is fascinating reading as well.  One version that I have read (but cannot seem to find online) says that when the Augustinian nuns refused to take her into the order and shut the convent gate, two Augustinian saints--St Augustine himself, along with St Nicholas of Tolentino--flew her over the walls into the midst of the nuns.  How can you not love a story like that??  (I said love.  Not believe.)

For me the awesomeness is probably about four parts sweetness and eight parts kitsch.  It's just fun!  I fully admit my interest is driven just a tad by prurience and sarcasm, but I'm also genuinely fascinated.
Posted by EM at 5/04/2013 05:00:00 AM