The going was a lot slower last week.   I was way more tired all week than I had been the week prior.  Not only that, the bricks were back with a vengeance.  I actually had to take a nap at work a couple of times!  I started coming out of it a little towards the end of the week.  On Friday, I stayed home and rested.  Over the weekend, I could feel things perking up a little bit.  Last week was the "bad" week in the cycle.  This one is supposed to be the "good" one.  We'll see.  I do have a lot to do, as I get fill up #4 a week from tomorrow.

I did learn some things last week, too.  I apparently have large lungs.  That's what the X-Ray Tech said when she had to re-position one of her plates and re-take the X-Ray because they didn't all fit in one shot.  I'm not sure if this is a normal human condition, but I'm calling myself "Large-Lunged Ed" from now on.  Maybe that is my heretofore undiscovered mutant power?  I've always known I have one.

Speaking of mutant powers, from time to time we'll walk into the kitchen and find Kosh sitting on his favorite kitchen chair.  Then, we'll notice that the door to the upper cabinet where we keep the cat treats is open.  I think someone else is hiding his super-powers.

Lots of good sale action going on over the weekend, but we only got to about half of it.  The power steering on the car started acting up after one stop, so I started dropping sales off the list where parallel parking was going to be required.  I left the big church sales on the list, so I did still get some stuff.  Of course, while we were driving to the last one, all of a sudden, the problem cleared up.

I did get a 1921 copy of Science and Health Through the Scriptures. 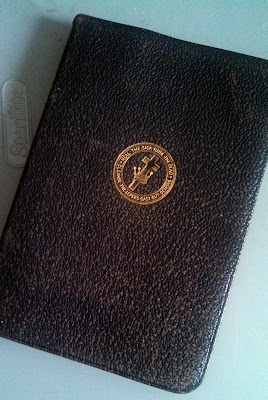 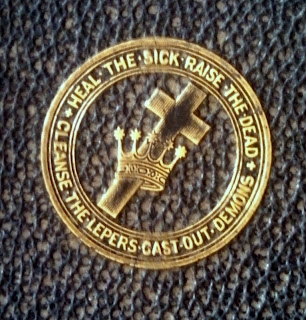 And a pair of giant plush Dr Pepper cans.

So it wasn't a total loss.

I also saw this when we were out.  See what's written below the tail light?  We are everywhere!

Junk set out week was pretty much a loss, though.  Threatened storms held off for most of the weekend, but the stuff just wasn't there.  Lots of real junk in junk set out this time.  Who would have thought?  I did find an awesome primitive cabinet, but that was about it.  Sorry that there's not a pic.  It's on the back porch, and I'm too lazy/tired to go out right new and snap one.  I still need to clean it up and get it to the Rough Room.

While cleaning out the shed to get some of our stuff to set out, I went through another box of Mom's stuff, which only leaves about 8 more to go.  I also found a tub of religious articles that I've been looking for to restock my religion wall.  Combined with the junk I threw out of there, I'm starting to get enough room in the shed to put a couple of pieces of furniture as a reserve.  I think I might make the shed my Memorial Day weekend project and get that finished.  There is a lot of stuff in there I would like to take to the YesterNook Outdoor Sale in a couple of weeks.  All I have to do is resist the siren call of the big flea market and half-price day at a large thrift.  The choices we have to make....

Sales were pretty good last week.  The Little Tikes stuff, the art table, the red chair, and one of the lamps have already sold, putting me in the black for last week's yard saling, before I even get to the small stuff.  That was nice.  I'm pretty much selling out the bulk of what I bring in for every restock at the Peddlers Mall, plus a nice chunk of already existing stock throughout the week.  I'm moving enough larger items to keep the daily take almost at what I would like for it to be, but I still have a few lag days that affect the overall monthly take.  Consistency, it seems, will forever be something I work towards.

It's gonna be a light week at work, which is good, since I do have other stuff to do.  One booth needs a complete do-over, and I'm in the middle of re-doing the other one.  It's the big one, and I'm working it a section at a time.  I'm nearly done with it, so it's time to begin revving up the other one.  I want to have it done by the outdoor sale, complete with a near-total restock.  I'll move most of the stuff that is there to the other booth.