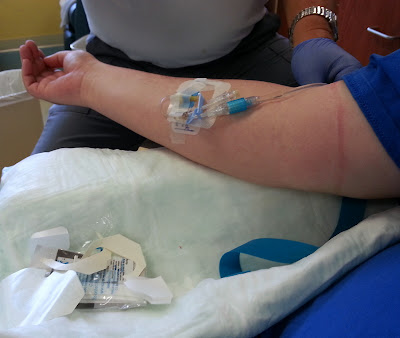 Things went really smoothly this time.  I was dreading the actual stick, since last time was such an ordeal.  The nurse told me later that he was too.  It's not good to be remembered because your veins are uncooperative.  I'm coming out of this thing with a definite dread--less than a fear, but more than a dislike--of needles.  It ended up taking just one try, so I am very grateful for that.

The doctors told me that I'm doing very well, tolerating stuff well, and having comparatively few issues.  Here I thought I was being weighed down by pallets of bricks and puking on my doorstep, but it turns out I'm doing better than most.  I don't know whether to feel guilty that I'm such a whiner or relieved.

It's OK to feel relieved and whine as much as you want. The thing to take away from the Dr is YOU are kicking this thing all the way to the curb!!

Didn't know you were a football player? You are my friend, you are.

Kick it to the curb, it's almost over! Can't imagine all you've been through and you just keep on going like the Energizer Bunny. Puke on the steps, go to a Church Sale. Just keep swimming, just keep swimming.....

I have great veins (I've donated blood over 140 times), but when one is dehydrated for a colonoscopy, they are harder to find. Fortunately my first nurse has 42 years of experience!

I'll get results of biopsy of one tiny lesion in a couple weeks.