By the Power of Grayskull!

This is another edition of "Stuff I Haven't Shown You Yet."  This time, I'm finally going to reveal the much-hinted at coolest find from our last junk set out.  Hold on to your hats folks!

There is a vintage store not far from the house that always yields a few good pieces of furniture during set outs.  When I was a vendor there, I used to raid the trash cans all the time. I still go by there every so often on trash night and check things out.

The alley that runs behind the store dead-ends abruptly.  It's also very narrow, making it hard to turn Mazda around.  A couple of doors down from the store, I saw some scattered pieces of a what looked like a castle lying in a heap.  Jokingly, I asked Keith:  "Is that Castle Grayskull?"

I got out of the van to guide Keith, so he could back up and turn Mazda around.  At this point, I looked at that pile again and saw the figures!  I ran to the van and said:  "It is!  It is Castle Grayskull!" and proceeded to scoop it all up. 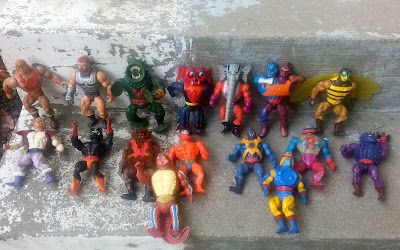 This is a decent set of figures. There are sixteen all together, along with one guy who is not in the picture because he's missing both his legs. Orko is missing, along with Skeletor and Battle Cat, it's still a great set.  He-Man himself is here, along with Prince Adam, his other identity.

Sadly, the playset itself is incomplete, so no Castle Grayskull pics, since some really major parts are missing.  Sniff!  I only have part of it, so I am totally not sure what to do with it.

On the other hand, there are also several vehicles. 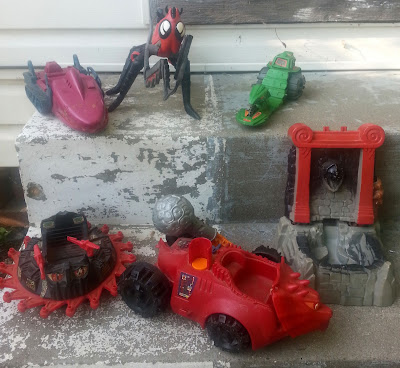 I also found one of the mini-comics which came with the toys.  I already have several of these, but nowhere near the full set. 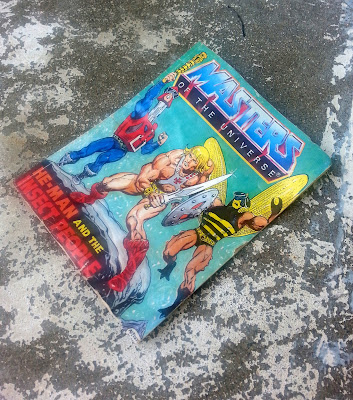 This is hands down the most exciting thing that I have ever found while doing the junk hunt on the curbs of our neighborhood.  Sheer awesomeness.

If you will excuse me, I have to go dig out my He-Man DVD sets.  I feel an afternoon of cartoons coming on. Believe it or not, Keith didn't get the Castle Grayskull reference.  These mixed nerd-normal marriages are rough some times.  I feel like making him watch the cartoons with me, to further his education.
Posted by EM at 8/09/2016 05:00:00 PM

I must say I don't get it either but your happiness is enough to tell me it was a fabulous free find!!

Poor, poor Keith! I can see you doing the Happy, Happy Grayskull dance down the alley.

I was watching Stranger Things on Netflix (PS - if you have a Netflix account I think you would REALLY love this show. It seems to hit on all the things you love). Anyways, it takes place in the 80s and in an episode one of the characters is watching He-Man. And boy, it just brought a flood of memories back to my childhood when I watched He-Man! :)