This one's for Roger Green!

It's not often you find a comic that has a connection to someone you actually know, so when I saw this one at the Big Flea a while back, I had to pick it up. 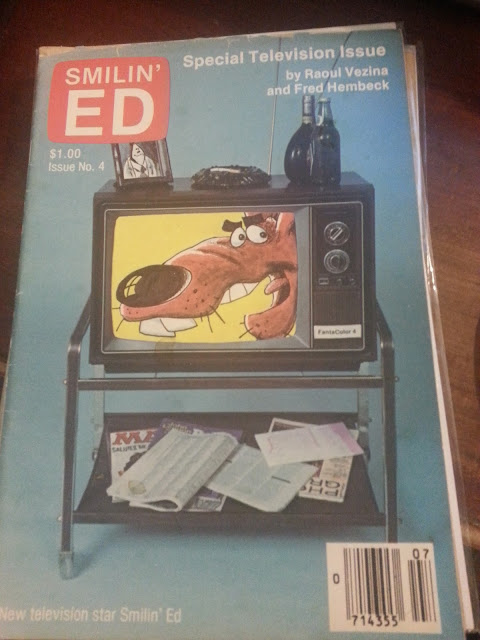 Blogging buddy and role model Roger Green worked for the company that published Smilin' Ed  and knew the creators well.  I'd been wanting to post this for s while, but decided that today is a good time to do it for two reasons.

First, just to let him know that I'm thinking about him and to send him some cheer.  The anniversary of his father's death was this week.  It was right after my father died that Roger reached out to me and we bonded over having experienced the same type of loss.  He's a good man.

Also, this seemed like a good way to inaugurate a new feature for the blog:  Comic Book Fridays!  Whenever I can remember to do it, I'll be posting something comic book related on Friday.  I hope to talk about some aspects of comics that will be helpful to other junkers, but also to share a bit about my favorites, trivia, etc.

Hope you enjoy it!

You are too kind! Thank you.

Deaths of one's parents are particularly rough and I am glad you two connected.
As for the rascal Smilin' Ed- he was seen just this week prominently featured on Amazon.com, both in a large trade paperback and also as a digital edition for Kindle.
FantaCo Publications and Amazon.com entered into a contract last week which will allow Amazon.com to introduce Smilin' Ed to readers across 19 countries. https://www.amazon.com/Smilin-Ed-Comics-Raoul-Vezina-ebook/dp/B01JOOH0UA/ref=tmm_kin_swatch_0?_encoding=UTF8&qid=&sr=#navbar

It is nice to form friendships in the aftermath of despair. I have never heard of Smilin' Ed so I guess I am in desperate need of a weekly Comics 101.

I will be checking out Roger and maybe learn a little bit about Smilin'Ed also! Donna and I are in the same boat about comics I think!
hugs,
Linda