Yesterday the high here was 80.  Yes. 80!  I did some alley exploring for junk for the first time in ages.  So nice.  Temps this week are not supposed to get above 90 here.  I believe Fall may be on the way.  Woo hoo!

To celebrate, I put up a fall wreath in my booth.  It's my only fall decor item right now, but I'm rooting around looking for the hay bales and gourds. 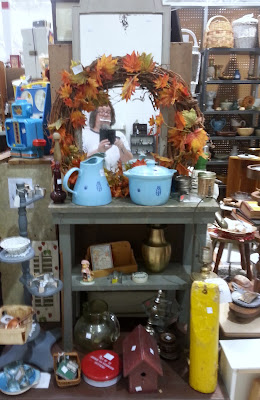 The wreath itself was a freebie find from in the neighborhood.  I had a little trouble getting it off the front door it was nailed to,  but a good determined yank finally brought it right off.

Okay, I'm kidding with that little bit.  It actually came out of a renovation dumpster a couple doors down.  I saw workers filling up a new one last week, when I was on the way to the bus stop, but I was running late.  I checked it later that evening, and the wreath was all I could get out because they had piled a mound of icky old mattresses on top of everything else.  The wreath came out in great shape, though.  Sometimes, you gotta take what you can get and be happy.

The guy who took down our water heater closet told me that all the reno in the area is due to one guy, who is buying up all the old shotguns, gutting them, rehabbing them, and flipping them.  If that's the case, there will be dumpsters for a while yet.  There are a lot of shotguns in this neighborhood.

SPEAKING OF THE BOOTH

I didn't get sales emails for the first three days last week, so I was freaking out.  No gravy!  No potatoes!  No plate!  ACK!

Turned out to be a glitch in the system.  Last week was a pretty strong one, all week long.  Still not all the way where I want it, but the gravy ladle is coming out more and more.  The weekend was especially good. Best one in a while in fact.  I was afraid the nice weather might pull people away, but I did pretty good both days.  It was the first weekend of the state fair to boot!

I'm planning a complete booth overhaul and massive restock that will probably take me two weeks or so to complete.  I'm ready for a new look and I want to connect most of my spaces into one long continuous booth.  I'm still working on the ideas, but I intend to start next week.  I have treatment tomorrow, so this is my rest week.

CHIQUITO TO THE RESCUE

I had a really bad case of the "I don't give a's" last week.  It got progressively worse too.  I started out not giving a shit, and then went downhill from there.  I didn't leave the house.  I didn't blog.  I didn't do nothing.

Then the cat started bringing me mice.  The first two were still alive.  The third one was dead.  At that point, I decided that I'd rather face the world than the building carnage at home. 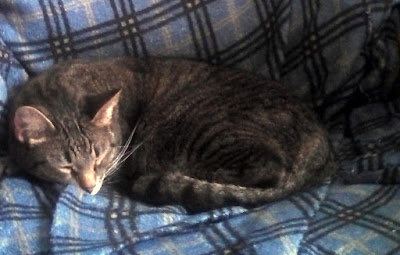 My sweet little boy is a killer.  (I think he was getting tired of me hanging out at home and bitching.)

Like I said yesterday, there was a music sale at the comic shop yesterday.  Everything was a quarter.  I went looking for oddball and fun and I found it.  More on that tomorrow.  But, for today, a little preview.

I give you Cesar Romero. In all his glory.  Complete with the mustache he refused to shave off to play the Joker on Batman. In TRUE HIGH FIDELITY! 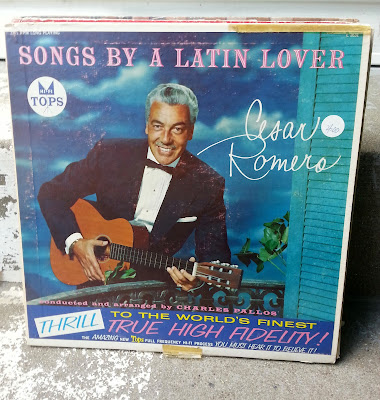 I picked up several albums, but only one CD, which was actually for me. 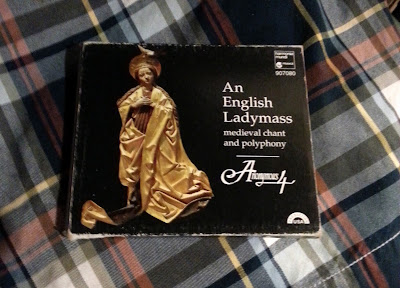 This is the only Anonymous 4 CD I didn't have. (Except for the newest one.) Well, I used to have it, but it was tossed when our much missed and beloved Himalayan Brianna peed on it.  She expressed her displeasure with the management that way.  This particular bout of ire aimed at me cost me the CD and three comics, one of which I still have to replace.  Believe it or not, she was a total sweetheart, except for this one issue.

SPEAKING OF THE JOKER

Since the topic of Batman just came up, I have to share the most wonderful news!  There's going to be an animated feature based on the show, with Adam West, Burt Ward, and Julie Newmar reprising their roles.  Do I even have to tell you that I am pumped for this?

Adam West sounds a little rough, but I don't care.  It's still gotta be him.

It's a special day here at the Ramble.  I'm combining the regular music for Monday with the DVD of the Week.

I spent some time Saturday night watching several Atomic Betty DVD's I picked up at the Peddlers Mall.  From time to time I like to try and make up for my misspent adulthood of employment and responsibilities by catching up on more recent cartoons that I had to miss the first time around, like Betty.

Quite frankly, it was a lot of fun.  Pop culture always seems to be lacking in heroes for younger girls, and Atomic Betty fits the bill nicely.  The first few episodes are a little rushed and don't quite work, but it evens out over time.  Betty is an every day school girl, who is secretly a Galactic Guardian, protecting the universe from all kind of menaces.  Quite enjoyable.  And kick-ass.  Very kick-ass.

Here's the long version of the theme.  Try getting this out of your head today.

Even better, try this mash-up with Betty and Sailor Moon.  Fun!

Booth sales are always way down for me in August. However, if I don't hit the 4 digit sales ($1000+), I'll be surprised because I've had a killer year in sales. Plus, you know my expanded booth at my second mall.


Fall decor, sheesh I better jump on it. I'm behind. I've got a HUGE stash of vintage Halloween costumes!

Eddie you make me laugh out loud and that is a good thing. I've been fighting the I don't give a s**t this summer also. Oh well, hopefully cooler weather will help some of that. Love Chiquito! Big Hugs!!