Tales from the Highway

Highway 127, that is.  Home of the World's Largest Yard Sale!

I have been wanting to do a little part of it for ages now, so it's about time we made it happen.  The damn road comes within a half hour of Louisville, after all,  People from around here go ever year.

I really didn't want to get out in the traffic and crowds, so we headed to a large stop in Lawrenceburg, Kentucky that boasted over 400 vendors, indoors and out.  There honestly weren't anywhere near that many sellers, but we also went on Sunday.  I could see there being a lot more folks earlier in the week.

I wanted to get to a spot where I could do a lot of shopping, but also get some last day bargains.  I think that definitely happened.  Five minutes after we got there, I was hauling stuff to Mazda.  I really wanted to get several larger pieces, and limit the smalls to either items that I don't have any (or many) of or things that were way too cheap to pass up.  I did pretty good on both fronts. 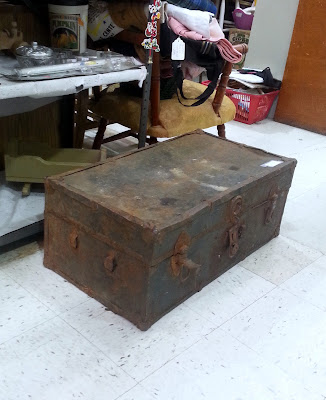 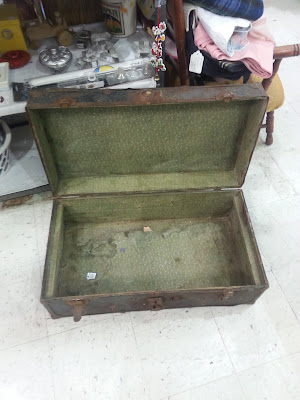 This amazing rusty old trunk had all kinds of vintage papers in the bottom of it.  I'll have a little more on them later. 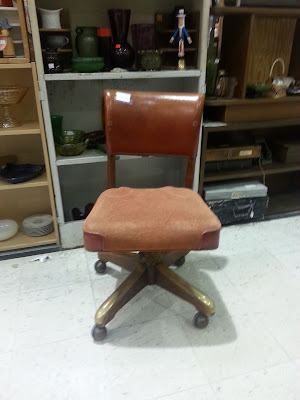 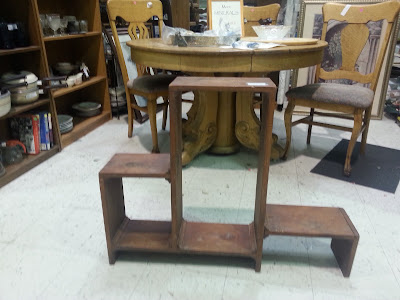 This chair and plant stand came from a woman who said that they had just put her mother-in-law in long term care and were selling her things.  She was distressed that she still had so many large items left, so I tried to help. 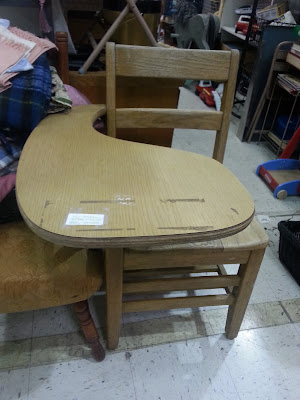 My school desk inventory has dwindled down to two, so I let myself get this puppy for five bucks.  It's one of the biggest and sturdiest I have ever found.  My big ole butt can fit in it!

And finally, the smalls.  There were dollar tables and quarter tables and free tables galore, and I was right there in the middle of them. 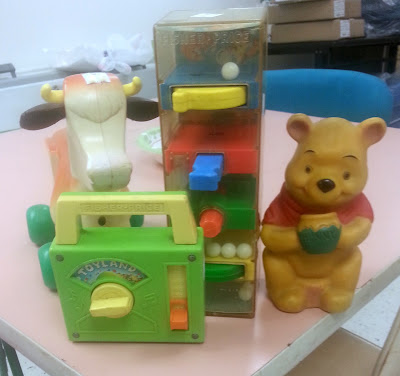 You know me and the Fisher Price toys.  Can't pass 'em by.  The tall one is called a "Tumble Tower."  You move the marbles from level to level by pulling and pushing on the levers.  My brother had one of these when he was very young.  I enjoyed playing with it too. 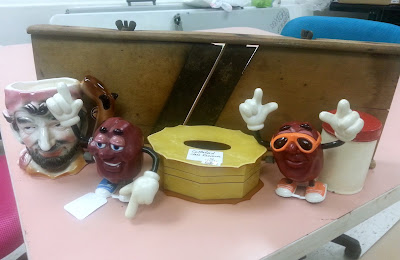 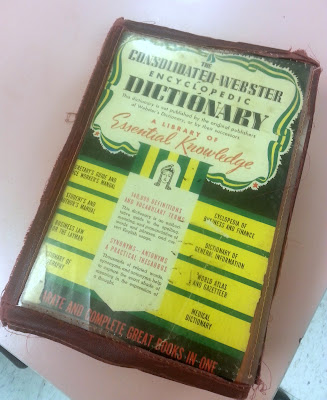 This was the only book I bought, believe it or not. 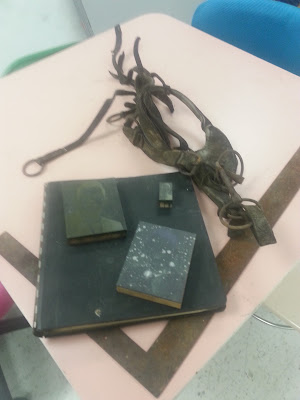 The bridle and bit were in the rusty trunk, along with the black ledger book.  Some of the pages are a little water damaged, but it's still cool.  That trunk yielded some of the best finds.  The small things are printer's blocks for photos. 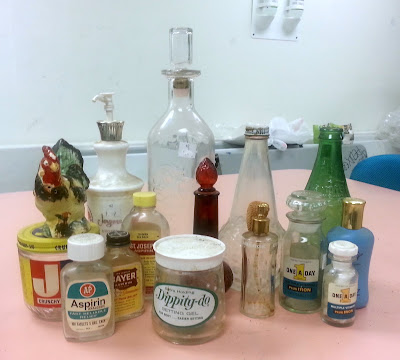 I really don't need any bottles right now, but these were only a quarter each.  I know everyone likes to go for the older bottles that may have held medicine or liquor, but I have a real soft spot for every day consumer containers of useful products, particularly when they still have the labels.  I remember my mother using Dippity Do in a jar like that.  I was most tickled to get both a glss Bayer aspirin bottle and a glass St Joseph's aspirin bottle, with caps.  The stopper in the larger One-A-Day bottle is glass.  The white bottle with the pump is for Jergen's lotion.  My grandmother always had a bottle of that on her dresser.  I also got some smaller jars that I am keeping to put buttons and such in.

I really liked wandering around and looking at all the goods for sale.  It reminded me of the roadside country flea markets I grew up with.  I've spent time at those kind of places with both my parents, my grandparents, and even my great grandparents.  Good memories.

The heat was just awful, as it has been most days here, with stifling humidity.  I'm glad we didn't plan on doing any more stops.  I'm not sure I could have taken it.  I was worn out by the time we got home from dealing with the heat.

Eddie I haven't done that sale in a few years because the heat is awful and it's a much longer drive from where I am, but...I do love the bargains you can find. Those bottles brought back memories! I had one a day vit's like that and that red bottle caught my eye! Love the toys and all that good stuff you found. I am heading to the mountains for a couple of days and of course a few thrift shops!!
hugs,
Linda

A friend of mine needed someone to go with her to the longest yard sale because her usual traveling companions couldn't go this year. She asked me if I would like to go. She'd pay for gas and hotel. I would just have to pay for my meals. I said yes and was all psyched up to go, but then she cancelled a few days before and decided not to go this year. Darn!

I do believe there is a warrant for your arrest - you stole that trunk of goodies! I would have paid $5 for the ledger alone. I collect peanut butter jars with the metal tops. Also Duke's Mayo - the ONLY mayo. At least your only book was all the essential knowledge you need.

I went to this stop on Saturday. It was our last stop before we made the 3 hour drive home. I honestly preferred Ohio over Kentucky, so maybe you could try heading north of Cincinnati next year? I can suggest some campgrounds - I know Keith would like that!

What a sale that must be, to shop and to look. Loving the trunk and the Dictionary is too cool. Desk chair too. I'm with you, fall sales are great, I cant take all that baking in the summer heat. In & out of a 100 degree car just makes me want to go home. :)

Great finds, Eddie. I totally love the celluloid hair receiver and those bottles bring back memories. The trunk is awesome and a huge bargain. I sympathize with you on the heat.... We usually go to the big Brimfield antique show every year (we only live about 40 minutes away) but no matter which show we pick - May. July or September it seems to be too hot.

Your chair is awesome! Maybe we'll catch better luck on the weather next year. Does make you wonder why they have it in the middle of summer. Why not early June?