I've never been good at doing posts in a totally timely manner, which is why I've ended up with stuff that I haven't shown you in the first place.  In other words, it's not really that surprising that I went to the Derby City Comic Con last month, but am just now getting around to writing about it.  Of course, given that the really biggie Comic-Con just happened in San Diego, I could argue that this is kind of timely, but I won't.

When I first started attending cons, I was really into the whole fandom scene.  I'd  go to panels and showings and all that stuff.  Of course, I'd spend a lot of time on the con floor, browsing and shopping and what not.  I even went to the San Diego con and worked booths a couple of times!  Those days are long behind me.

Nowadays, I treat cons like the Big Flea--opportunities to shop.  There are lots of comics to be had and lots of bargains to be found.  Usually, my priority at a con is to fond stuff for me and my collection, or at least stuff I want to read and then sell.  Finding stuff that goes right to the booth is a bonus.

Since I went on Sunday, I didn't take any pictures.  There weren't that many folks in costume on the last day.  I didn't see him, but I know Spider-Man was there, because I saw his van parked outside. 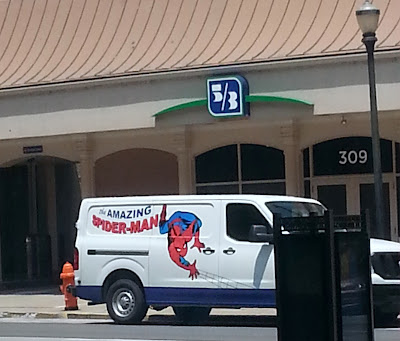 He must have been doing some serious shopping, since he's parked in front of the bank across the street from the convention center.

Speaking of serious shopping, this was my deal of the day. 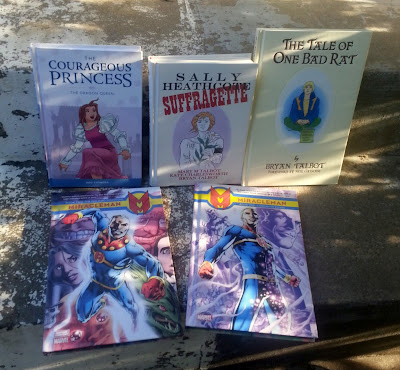 Five HARDCOVER graphic novels for 20 bucks!  The two in front retail for 35 each!  There's a dealer there who buys things on clearance from the distributor and then sells them for five bucks each at the con.  If you buy four, you get one free!  Lots of interesting reading here.

By the way, I'm limiting this post mainly to the stuff I bought for me.

I always buy the original Classics Illustrated when I can find them cheap.  I lucked into these for 50 cents each!  I have so many of these now that I often end up buying something I already have.  In those cases, the duplicates go right to the booth.  This was one of the rare cases when I actually found a bunch of issues that I did not already have.

I picked up this series because it looked interesting.  The covers did what good comic covers are supposed to do, grabbed my attention.  You'd be surprised how rare that is these days. 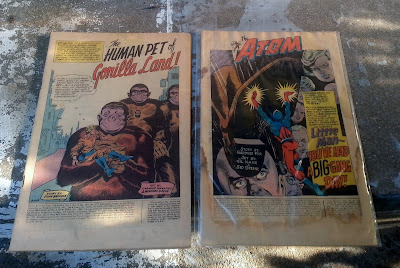 Coverless comics from the sixties.  Comics without covers are not really worth that much, so they're usually pretty cheap.  I pick them up and use them as place holders in my collection, especially if they're from series--like the one of the right--that I don't have many of. 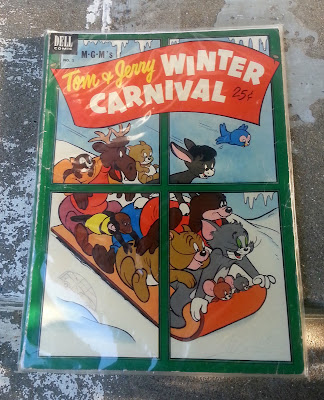 I'm not sure what I'm going to do with this one.  On the one hand, I love, love, love the older, extra thick, 25 cent giant issues, from any company.  On the other hand, I'm not really that wild about the old MGM cartoon characters.  I'm much more of a Warner Brothers and Disney kind of guy when it comes to classic cartoons.  This one might go to the booth.

Stuff I got because it looked interesting (and it was cheap!)  A whole lot of the comics I got came from a dude that has a new shop in town that I hadn't heard of before.  It's not far from the house.  I need to get over there and check it out.  Another dealer that I got some stuff from looked so familiar that it drove me crazy trying to think of who he was.  Finally, I remembered that he's one of the guys I run into at every yard sale where they have comics.  And that he annoys the living shit out of me.

A few issues from what I consider to be the greatest era of super-hero comics--the Silver Age! (roughly late 50-s to early 70's)  I got all of these from a guy that I see all the time at the Big Flea.  I was kind of surprised that he didn't recognize me, since he always knows who I am there. 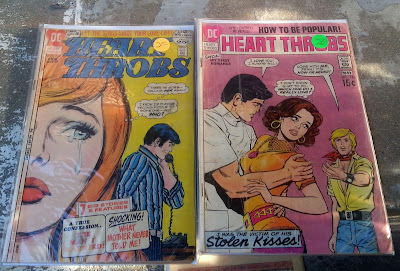 ROMANCE COMICS!!!!!  Be still my heart.  Sigh!  The cover of the one of the left is particularly striking.

One booth buy that I will show here is this lot of toys. 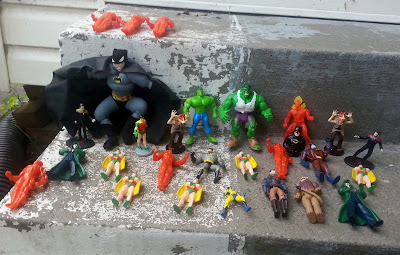 They were all in a box marked "Show Special!  One dollar each!"  I circled it all afternoon and plotted.  And watched.  And counted.  And calculated.  And waited.  Finally, during the last half hour of the con, as folks were starting to pack up, I went back to that booth, picked up the whole box and asked about an offer for the lot.

I was a little taken aback when the dealer kind of defensively grabbed the large Batman out of the box before answering.  He asked me what I was thinking as far as a price.  I offered 12 bucks.  I had been planning to go 10, but the way he grabbed that Batman made me think I probably shouldn't lowball.  At that, he put the Batman back in the lot (whew!) and countered with 15.  I took it, since I was figuring that was where we'd end up anyway.  There's still plenty of room in that for me to make some money. 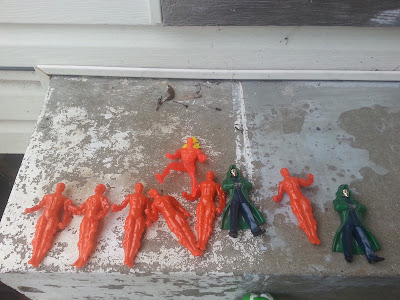 The Fantastic Four toys are mostly from the first FF movie. The Doctor Doom has two little spots on his back. 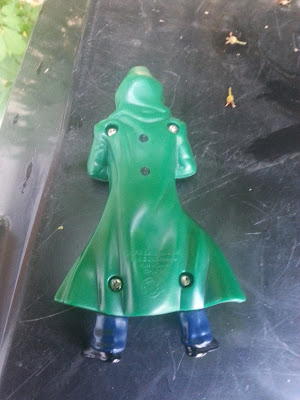 If you place your finger over them, you complete the electrical circuit and he lights up.

The current is so mild that you don't even feel it.  I used to have a Pikachu that would shout its name when you completed the circuit.  Nerd stuff is fun stuff.

I'll keep a couple of the Robin figures, for my dresser top collection.  They're all from the late 80's.


This summer started off very slow for comics, and I was getting worried.  With the Comicon, I was finally able to lay in a good stash for the booth.  There was a sale last week at the comic shop that helped too.  I came away from that with a large lot for the booth and, of course, some for me. 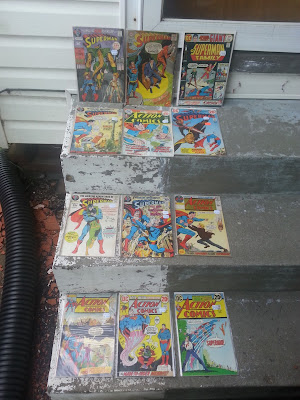 My stash includes this nice batch of 1970's Superman comics.  For 50 cents each!  What a deal.  It always amazes me when I wade into a nerd herd and people are passing stuff like this up.  It seems like most of the younger collectors are only interested in the most current stuff, so a lot of the older stuff like this gets passed by, even when it's dirt cheap.  It's kind of sad, because these are some really great comics.

On the other hand, that leaves more for me!

Email ThisBlogThis!Share to TwitterShare to FacebookShare to Pinterest
Labels: comics, pics, stuff I haven't shown you

I enjoy reading about your comic collections and buys. I must admit to really loving the Robin collection!
hugs!!!

Eddie, you are a true comicusphile if I ever saw one! Tome and Jerry were my favorites growing up along with Little Lottie and Richie Rich. The romance comics were a teen fav. Great finds! Did you notice Spiderman parked by a fire hydrant?

Such a fun post! I would love to get to a comicon one day, even a small one. I think the old comics are fascinating, and remember having some of them. You did great, glad you nabbed the batman box. :)