Apologies all, but there's no time to ramble this morning.

We've been without water since Friday (!), when our hot water heater gave up the ghost.  Water was just pouring out of the bottom.  It's so old that the valve on top that is supposed to cut off supply to the heater wouldn't budge, so we had to cut off water to the house.

We thought the new water heater was coming on Saturday, but apparently Lowe's plumbing department doesn't know how their installation department works--or doesn't on weekends.

I'm moving booths today (more on that later), so I have to run.  I took a quick wash up using some of Keith's camping supplies.  I'll do a proper ramble later in the week.

The worst part about having no water is trying to explain to Chiquito that the bathroom faucet isn't working.  He doesn't seem to believe it. 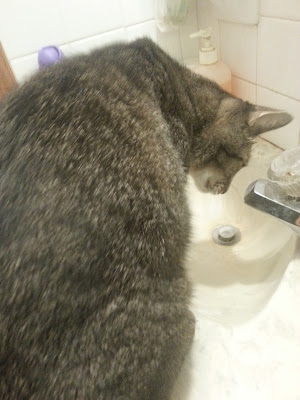 Poor Kitty! Charlie would not have understood either. Hope you get your water heater installed and get back to normal (whatever that is ha!)
hugs,
Linda

I can't imagine living without water in this heat! Oh my! And moving booths!? I moved into a new one yesterday. I'm up to 4 now (2 each at 2 malls). It's fun. I realized though, after digging through my garage, etc for stock for this new booth, that having not shopped for 6 weeks has really put a damper on my stock. Thank goodness the 127 is this weekend. Have you convinced Keith to take you? I hope you get to go! I SHOULD be making my way though the KY portion on Sat/Sun. Wish me luck!!

Poor guy - the cat, not you. Just kidding. Hope the plumber came today to replace the water heater. Moving booths!?! Are you crazed from the lack of water!?! I'm with Melissa - Keith should take you out to junk on the 127 after all the trials and tribulations of ancient appliances. And Chiquito needs extra treats.