I don't normally do these kind of recap posts.  For one thing, others do it so much better than me.  For another, I try to get stuff to a booth so quickly, that it is often not available for pictures.  Every now and then, though, a weekend comes along that is so fantastic that the story has to be told.  This is one such weekend.

To begin with, I'd been feeling pretty good, relatively speaking, all week. I'm still slow-moving and I still get tired, but it created an eagerness in me to get out to the sales.  I never know how I'll feel from one day to the next, so I gotta strike while the iron is hot, as they say.

I think the story is best told through pictures.  They are worth a thousand words, after all.

This mod-style ice bucket is missing a handle, but was too cool to pass by.  It was the only decent item at a sale where I saw the nastiest electric skillet-wok-thing I've ever seen in my life.  Imagine cooking a pound of bacon every day for like a month and not cleaning the thing out in between cookings.  Then, imagine taking it out in the yard and setting it under a tree and leaving it there for another month.  Then, nest a family of chipmunks in it for a month.  It was nastier than that! 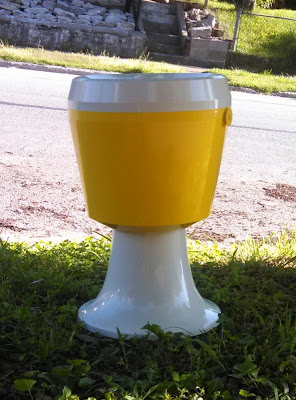 These vintage Star Wars figs came from a sale where a perky blonde missionary-to-be tried to push me into buying more than I wanted.  She said she didn't have exact change and was insistent that I just "get something else" to make it up.  Instead, I put something back to being my total down to the amount she said she had.  She was so rude through the whole shopping experience that I nearly left everything there. 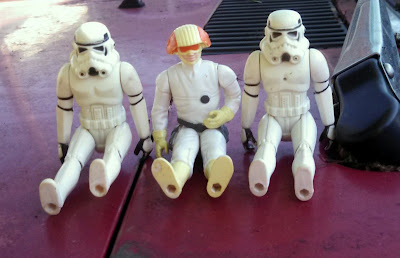 This chair is a modern repro, but still classy and so cool.  I love the button detail.  It was on the worst street for parking in this city. 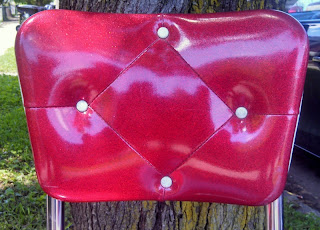 These next items all came from the same sale.  We pulled up and I just started piling them up.  I needed some larger stuff, because I just sold a cabinet at Peddlers Mall.  Since I really don't have much storage, I have to kind of do the large stuff on an "as needed" basis.

This was probably the most fun stop of all.  The actual seller was at the bank getting change, but I kept asking her friend questions, so she had to keep calling.  Finally, she called the seller and just handed me the phone.  Fun times.

The big lamp was on the porch and I bought it with the other stuff.  Then the seller came home and asked if I wanted to see two more she had for the same price.  She brought out the little ones and I just died. Sold!  And Sold!

We got so much stuff there that this was the end result.  The seller and her friend were cracking up that we took a picture.  The shopping cart and a half table are on my lap!  You can kind of see the Little Tikes table through the back window.


We had to run home and unload after that one.  Then we went to a church that had already had one sale this year, but if they are selling, I'm buying.  I found this child-sized art/drafting table there.

We had to leave the table and go get my truck to haul it.  The weather looked just iffy enough that we didn't want to chance using the truck unless it was needed.  The color on that table is hideous, but that can easily be changed.  It's got a lot of life left in it.  At least, that's what I am going to say on Craigslist.

I spent Sunday running stuff to the booths, so most of it is out there and priced.  Sunday night, I did Craigslistings for everything as well.  The shopping cart sold on Sunday, and the table and chairs sold yesterday!  I'm definitely keeping Little Tikes on my list from now on.  Fingers crossed on the rest of it.

We love you, Goofy. I mean, we love you goofy.