It's not really that unusual for someone who collects Catholic religious objects (which I do) or for someone who sells them (which I also do) to come across rosaries from time to time.  Actually, it's one of the things you hope to do.  But here lately, rosaries have been popping into my life in quantity.

Week before last, for example, I was at the booth doing my usual restock and clean up, when I noticed something on one of my shelves of religious articles that didn't belong there.  Now, things that don't belong to my booth seem to make their way to it all the time.  It's part and parcel of the business.  Customers will carry an article around for hours, then look at it, decide they don't want it and lay it down on the nearest flat surface, never really caring if that is where it belongs or not.  A good chunk of my restocking time is spent rounding up strays from other booths and taking them to the front for staff to return.  I take a few back myself, but only if I know where the booth is.  Every couple of weeks, I take a spin through the mall looking for my own goodies that have not made their way back to me yet.  It's time-consuming, but like I said, it's part of the game.

And then you have the hiders--those customers who want something, but don't have the money for it right then, so they take the item and hide it somewhere in the store (usually another booth) intending to come back and buy it later.  Hiders really work my nerves, partly because they mess up displays to stash someone else's crap in my booth, and mostly because I don't think any of them ever really do come back and make the purchase.  Either they forget to or they forget where they stashed the stuff.  Or what it even was that they stashed.  In the meantime, I'm left wondering whatever happened to the hippity hoppiter I used to have.  Usually, about six weeks after I've given it up as lost, it will turn back up in my booth.  Someone was giving their booth a thorough tidying and found it.

I had a bunch of matted Disney prints disappear out of my booth last year.  I mean just vanish.  Into thin air.  I looked high and low all over the mall for them for weeks.  I finally found them in my own booth when I was cleaning and rearranging some books.  Someone had taken them and slid them behind everything on that shelf.  Obviously a stash.  And equally obviously one that never got claimed, since it was months after the fact and I was finding them.  Of course, they sold as soon as I put them back out, so I was doubly pissed.  All that money tied up in the things unable to generate any income because they're stuck in someone's hiding place.

But, I seem to have digressed a tad, haven't I?  Well this stuff wasn't hiding and if it belonged to another booth, I couldn't tell.  It was a pile of unpriced rosaries.  Just sitting there, happy as you please, on a Sacred Heart of Jesus plate.  I asked around but never found out where they came from.  It's almost like they were a gift from Jesus and Mary.

So a few days later, I'm at my favorite thrift, and they have a bag of rosaries on the counter.  It's  all taped up and there is a 50 cent price tag on the bag.  I ask the cashier if that's the price for the whole bag and she says that it is.  So, of course, I bought it.  (Duh!  Who are we talking about here?)

There was a whole mess of rosaries in the bag.  I mean, just a pile of them. 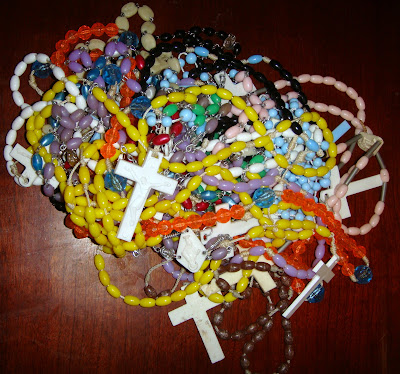 I straightened them out and counted.  There were twenty all together.  Nothing antique or vintage, or even really that special, but I'll make much more than that fifty cents back. 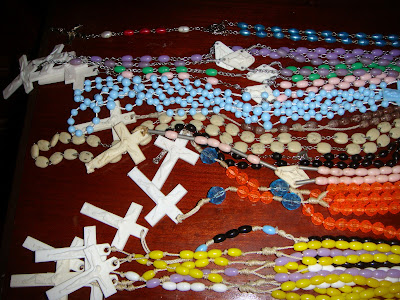 There were plastic cord rosaries.  These are the kind that are usually made by little old lady rosary guilds and given away for free. 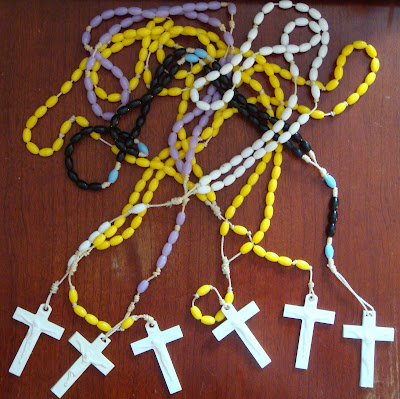 There were metal link rosaries with plastic beads and crucifixes.  These are the next step up from the cord rosaries, but still likely made by a guild for free distribution.  I love the colors on these beads.  I may make them part of an Easter display. 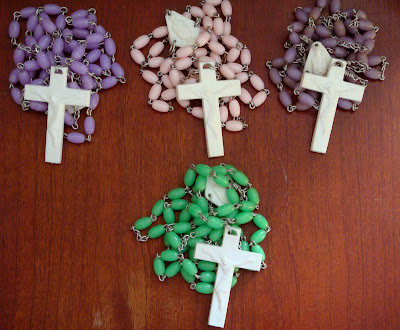 There were three light blue plastic rosaries.  I think these are kind of sweet.  I almost wish I had some pink ones to go with them. 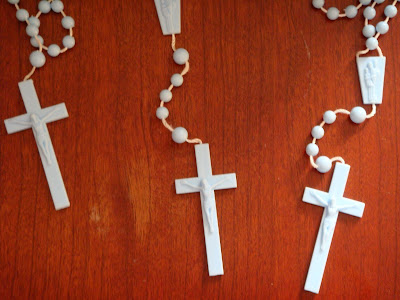 And then there was this patriotic number.

There were some that can only be described as, well, tacky. 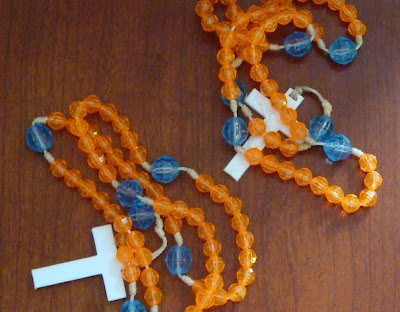 Out of the whole lot, there was only one that needed any repair work.  It also happened to be the nicest one in the batch.  This is an easy fix, once I find my needle-nose pliers. 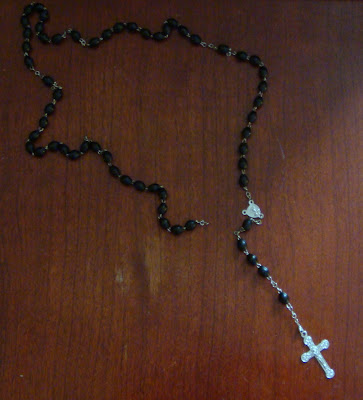 And, finally, the most unusual one of the bunch.  Instead of a crucifix, this one ends in a medallion of the Holy Face.  It's probably a chaplet, instead of a rosary.  Not the best photo of the medal, I'll admit.  My little camera is not the best of tight detail close ups. 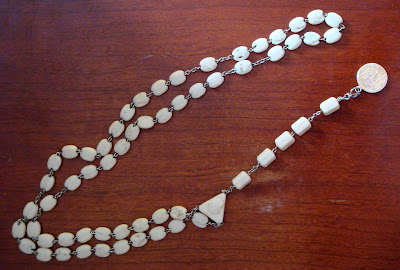 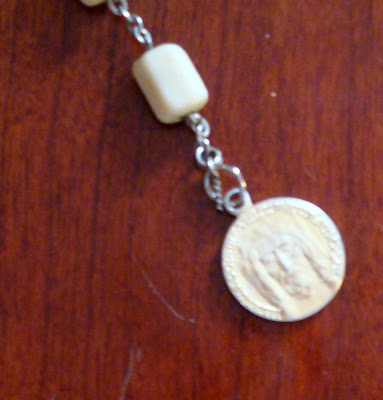 I haven't run across any more for the past few days, so it appears that the tide of rosaries may have stemmed for the moment, but who knows what might lurk around the next yard sale corner?
Posted by EM at 3/09/2012 08:15:00 AM