For Whom the Bells Toll

It is a good thing to sell your large Christmas items--in this case two trees and a large wreath--until you see the huge gaping empty table that's left behind.  I didn't grab a pic of it, but it was pretty sad.  Ornaments scattered everywhere.  AnnLeee mice looking desolate and lonely.  The aftermath is never very pretty.

I kind of wracked my brains trying to figure out what to do.  I could have just scrapped the whole Christmas table idea and put out non-seasonal merch.  I strongly considered converting it to a gift idea table, but I really don't have as much new stuff this year as I normally do.  Then. I thought I might just move all my boxed ornaments and stuff off the shelves and make a big table of Christmas decor, but that seemed so...well....retail.

I was about to bite the bullet and do it, when I looked around the booth and had a brain flash! 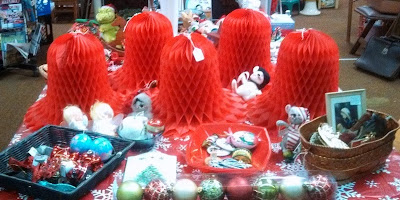 I had been keeping these in a basket with some other holiday items, all folded up so they would not get torn.  And they've just been sitting there.  There's a high likelihood that they'll get trashed sitting out all opened like that, but they're the right scale for the table and way more interesting than boxes of ornaments. 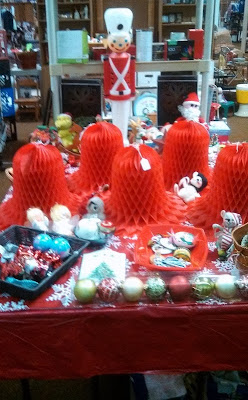 It's not a perfect solution.  There's way too much red going on here, but I don't have any green bells.  It does have visual interest, and that's what makes people stop and look.

Plus, the AnnaLees look like they're having so much fun hiding among the bells. 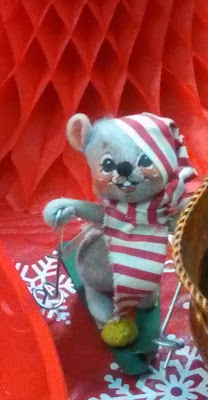 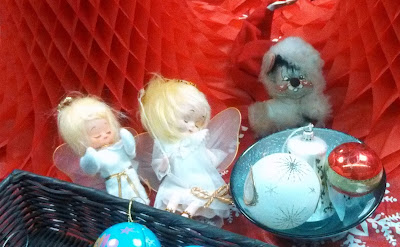 I have a bunch of those honeycomb bells too - red, green and white. I have wanted to put them out like you did, but I just know they will get ruined. They look so festive though! And with the Annalee's - it's great.

How great to sell those big items! I think your display is just fine. Do antique malls get a lot of traffic the week before Christmas? I'm in panic mode, so that's not the kind of shopping I'm doing right now.