Manomanomanoman!  How the heck did it get to be DECEMBER?  Parts of this year crawled by, while other parts seem to have flown!  Dang!  I've still got a lot to do before the year ends, like reinstall my printer--thank you Windows 8.1--so I can finish scanning my vintage holiday cards.  It's time to get all those posts set up!

I actually thought I would get that done over the weekend, but I've been fighting a cold since Wednesday.  It seems to be settling in my chest, which means I'll probably have to go to the dr. to get rid of it.  I spent most of Thanksgiving in bed, only emerging to eat my three survivor feasts, because a stupid cold ain't gonna stop a survival feast.


I spent Wednesday afternoon at the booth trying to get a bunch of stuff accomplished:

I pretty much failed to get most of it done, so I had to go in Friday, Black or not.  Cold or no cold.  We were busy, but in spurts.  It wasn't steady at all.  I fell victim to one of our "changed my minds."  We've got a special breed of customers who will wander the store, filling their cart all the while, then decide at the register that they don't want half of it.  Since her process involved dismantling part of one of my displays, I had to actually put that one together twice.

I did manage to get everything done on Friday, so I am heading back today to tidy from the weekend and work on my storage space.  I also need to price and put out more comics, they've been selling steady lately.

I was going to take pics of my moving and transitioning, but as usual, I started and got busy and then forgot to take more pics!  Here are some, but you'll have to fill in the story a bit.

This is the new book area before I started it.  That door opens to my new storage area.  I'm not quite done with it yet, so no finished pic.  I decided that it made more sense to keep my religious stuff in the same general area and make my new wall space something different.  That way, my regulars who buy my religious stuff would still be able to find it. 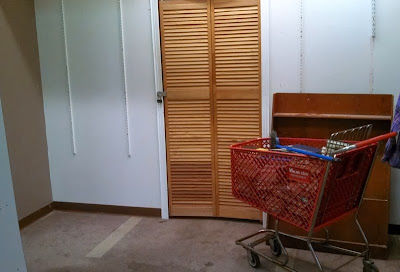 Interestingly enough, that piece sold once I moved it.  It had been sitting around for months.

The new religion space is a bit more compact than the old wall.  I've had to move the books and pamphlets to the new book booth.

I was also finally able to get my shit together and finish my Xmas display, which had been in various stages of completion since the first week of November!  I just kept second-guessing myself and doubting everything I did and could not seem to pull it together.  But I finally did and I think it looks pretty nice, if I do say so myself.  (I've already sold all my wrapping paper!)

This coming Saturday is our big holiday festival at the Peddlers Mall.  Santa is going to be there!  I'm going to be in the booth making deals.  I'd like to clear out some of the books especially.  I have a lot to get ready before then, so I'll be out there a few times this week, provided this cold doesn't win the battle and lay me out for a few days.
Posted by EM at 12/02/2013 06:02:00 AM

That cold you've been fighting sounds like what my daughter and friend had. Hung on forever. Keeping my fingers crossed you don't get it!

Hope your weekend goes well! We're leaving on our last trip of the year tomorrow, to Istanbul!

It looks great! My booth is chock full of Christmas, but it's not selling. I am freaking out because I have SO much and I do not want to bring it home. Love all the Annalee's peeking out there. Hope they sell!

when I worked at the comic book store the boss was having us move things around all the time. /people stop seeing stuff in the same locale.

Get well, Eddie. Booth is looking great.. Ok, you think dolls are scary, but that Jesus statue didn't phase you. I love Jesus, but (sorry Lord) that was scary! Feel better soon.