A week from tomorrow is Thunder Over Louisville, the big air and fireworks show that kicks off the Kentucky Derby Festival.  It's also not one of the best days in this town to have a yard sale.

Two weeks from tomorrow is the Kentucky Derby Festival Marathon, where a bunch of people run 26 miles in honor of horses who run 1 1/4 miles.  Makes sense to me.  Of course, the horses do have to carry people.

Three weeks from tomorrow, those people-carrying horses will do their thing.  And this town will be dead.  No traffic.  No lines anywhere.  It's the best day to go shopping.  It's also the worse day to be a reseller.  And not a very good day for yard sales, either, even though there's an annual sale not far from our house that I consider to be the "official" yard sale season opener!  It's always good.  Several dealers unloading their winter overstock.  Very much vintage.  Very much bargains.

At the same time, something else special will be taking place.  FREE COMIC BOOK DAY!

It's unfortunate timing that this event takes place on Derby Day, but since it's a national event, they really don't care what else happens in Louisville.  I guess.  One of the shops here usually compensates for the Derby conflict by extending the event the whole week.  No word on whether or not they will do that again this year, but I plan to make time to pop over two-three times during the week if they do.

To clear up one important bit of information:  All the comics are not free.  But specially published comics released just for this day are available for free at local comic book shops.  If you have never done this before, that's an important piece of knowledge to have so you don't make an idiot out of yourself in the shop.  Or get arrested when you try to carry non-free stuff out of the store.

FBCD started several years ago, right around the time the first big budget super-hero movies were rolling out of the studios.  It was an attempt to tie these movies back to their roots in the comics by giving people who were not familiar with comics a chance to sample a bunch of them without risking any money.  You owuld be surprised how many people are not even aware that comics are still being published.  Of course, since they're only available in specialty shops any more, you can't blame the general populace for being out of the loop.  There's something about being a nerd that breeds insularity.  But that's a post for another day....

Overall, it's a lot of fun.  Many stores have special sales or events like costume contests.  There are always lots of kids getting comics, and that makes me really happy.  Heck, seeing kids read anything these days make me really happy.  (Am I getting old?)

I don't buy new comics any more.  I just can't afford them.  But I still love them.  I get excited every year when FCBD rolls around.  Besides the fact that I like free stuff.  (Who doesn't?)  It just makes me feel good to see excitement and interest building in something I have loved my whole life.

You don't have to be a middle-aged (I'm still middle-aged, right?) geeky dude to enjoy FCBD.  If you have kids, grandkids, teens in your life that you are trying to help develop the lifelong reading habit, this is a good place to start.  Teachers get comics for their students to read as a reward for doing their work.  There are always FCBD books geared for kids, younger readers, and usually there's a wordless book or two for non-readers.  Do you know a budding artist?  Show them how they can tell stories with art!  Heck, get a couple for yourself.  You might find something you like.

So what am I thinking about getting on this most wonderful of days? 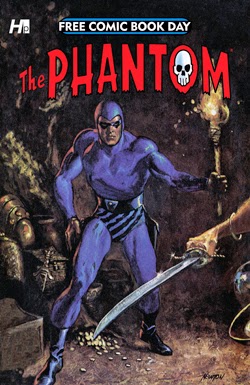 There's going to be some vintage stuff in this one, which mixes older reprints with newer stuff.  I'm hoping the older stories aren't ones I already have.  Good old-fashioned swashbuckling adventure. 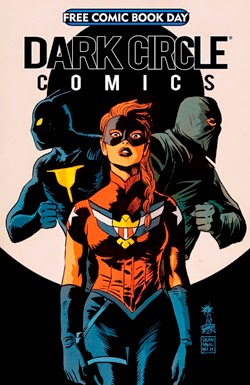 Every so often, someone tries to do something with the super-hero characters that Archie used to publish in the 40's.  This is the latest attempt.  I might pick it up out of curiosity.  Oddly, Archie doesn't seem to be doing a FCBD comic this year with the regular Archie gang. 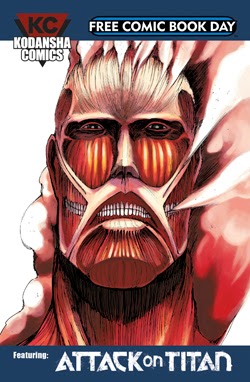 I don't know if the manga boom is still going as strong as it was several years ago, but I find it helpful to (try) and stay current with what's available and popular, in case I run into it at a yard sale somewhere. 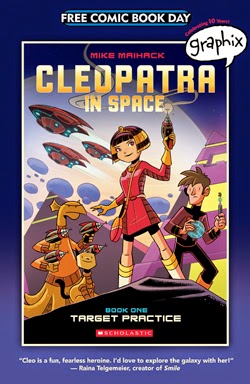 Cleopatra in Space.  What's not to love?  Looking for heroic tales with a female protagonist for a little girl in your life?  This might be a nice one to try. 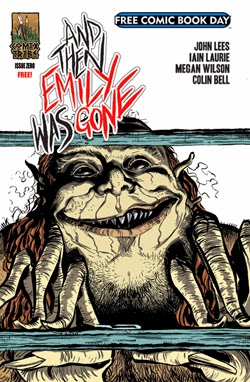 I'm kinda curious about this one. 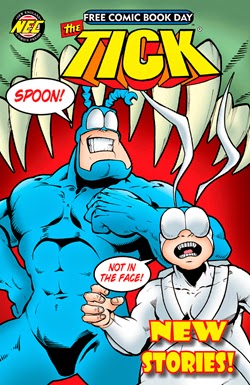 I love the Tick.  That is all. 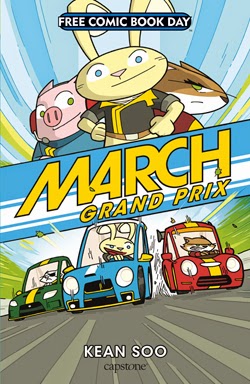 Rabbits and other animals racing cars?  I gotta see this one. 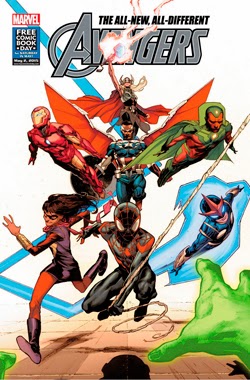 I'll look at this one for the nostalgia vibe, if nothing else.  Every three to five years, the big publishers completely restart all their super-hero titles in the name of being "current."  What they actually do is create an impenetrable maze of titles and stories that someone coming straight from the theater looking to get some more of the cool stuff they saw in the movie gets totally lost in.  I'm not sure this will help that situation, but it could be fun. 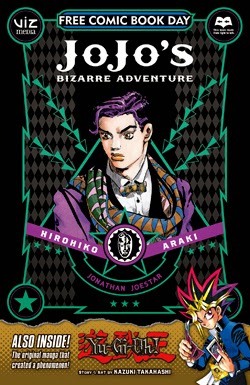 This is the way to get someone to try something new.  Put something they already know, in this case Yu-Gi-Oh, in the free book with it. 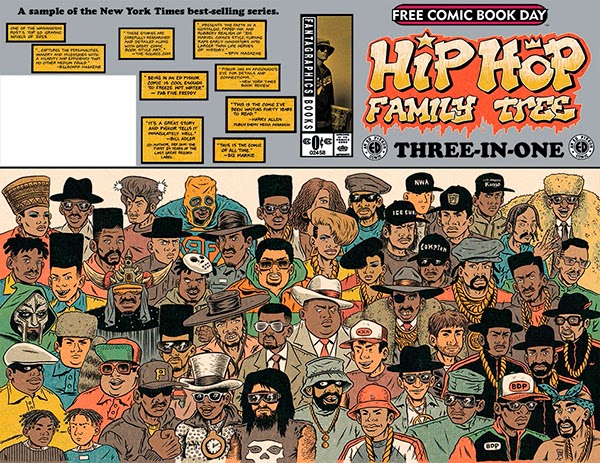 I love music in just about all its forms and I loved last year's freebie for this title.  Lots of detailed information inside.  Some day, I would like to actually own the hard cover volumes of this series, so I can read the full story. 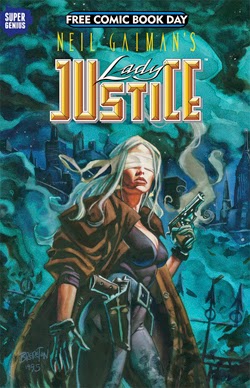 Another real curiosity.  This was a book from the late 90's put out by a publisher that didn't last very long.  It feels like someone is either trying to cash in on Neil Gaiman's name, even though he had very little to do with these comics, or there's a weird nostalgia boom I don't know anything about.  You can walk into just about any comic shop in America and find a copy of the original comic in the 25 or 50 cent boxes, so I don't know why someone is doing a free version..  I was never more mildly interested in the whole concept, so I'm going with the freebie.  It might be fun.  Who knows? 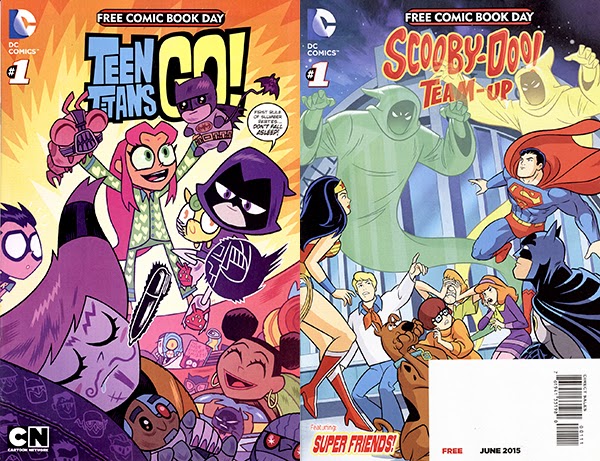 Good comics for kids.  Teen Titans GO! is about the only thing I care to watch on Cartoon Network these days, and it's wearing a bit thin.  But a Scooby story with Batman and Wonder Woman?  I am so there. 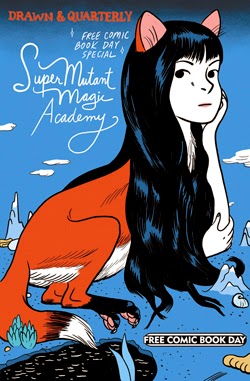 This is one of my favorite publishers.  I always get their FCBD stuff. 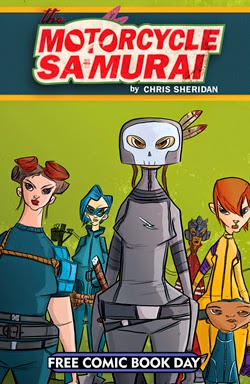 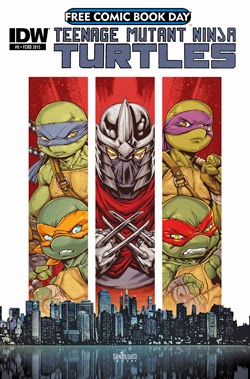 I haven't read a TMNT book in years.  Not since the original black and white series, in fact.  I might pick this up for the heck of it.

When the day actually comes, I may not actually get all of these.  Not every store will have every book, for one thing.  And some stores set limits on how many you can take.  (They do have to pay for them, so I understand that.)  I'll come out with at least a few of these babies in the end.  And probably some other stuff.  Most shops have killer sales running on FCBD, and I need to get some comic bags and other supplies.  I'll also be on the look out for cheap back issues for me as well.

You can find out more about Free Comic Book Day at their official web site.  The site includes a locator to help you find a comic shop near you, plus information on all the FCBD titles.  There are many more than what I've shown here.  They include the covers for all the titles, plus a few page preview to check out.  I didn't read any of the previews, because I want to be surprised on the first Saturday in May.

Email ThisBlogThis!Share to TwitterShare to FacebookShare to Pinterest
Labels: comics, eddie geeks out a little, FCBD

Eddie, not being a comic book person I found this post very informative and fun. I see one that Tiger would like (rabbits and race cars). I only read Archie comics growing up but my oldest girl loved Sailor Moon and other Anime growing up so I've seen some of that. Have fun as it seems the rest of Louisville will be watching horses run around!
hugs,
Linda