Well, it finally happened.  I do feel sorry for them.  It's tough to make it so far and then have it all snatched away.  It also came too late to have any effect on sales here.  Oh well.  It's also now Spring Break, which is traditionally another lull, with the Derby Festival waiting to start up on the 18th.  April is a cruel month. Also, a stormy one.  We're gonna be covered in the proverbial May flowers if this keeps up!

The first few days of the month were a little down, as far as daily sales go, but Saturday was the Spring Fling at the mall and I had a killer day.  I thought I was going to sell a table that needs to go, but the people that kept looking at it and talking about it bought a gun cabinet from someone else instead.  I guess you can eat cross legged on the floor, just as long as the shotgun is secure.  Or something.  I did sell a nice shelf and a ton of comics, so it was still a really good day.

Speaking of Saturday, it was a long day.  It had POURED rain CONSTANTLY at the end of last week, so the thrifting I wanted to do did not get done.  I added that to the yard sale list, which already included a stop at an antique mall (for a booth that was running a 75% off sale) and the comic shop (for 25 and 50 cent movie special sale).  Add the drop off at the mall to that, and it was after 8 before we got home.  It did make for a nice Mazda shot yesterday.

Speaking of which here's the big stuff from the haul. 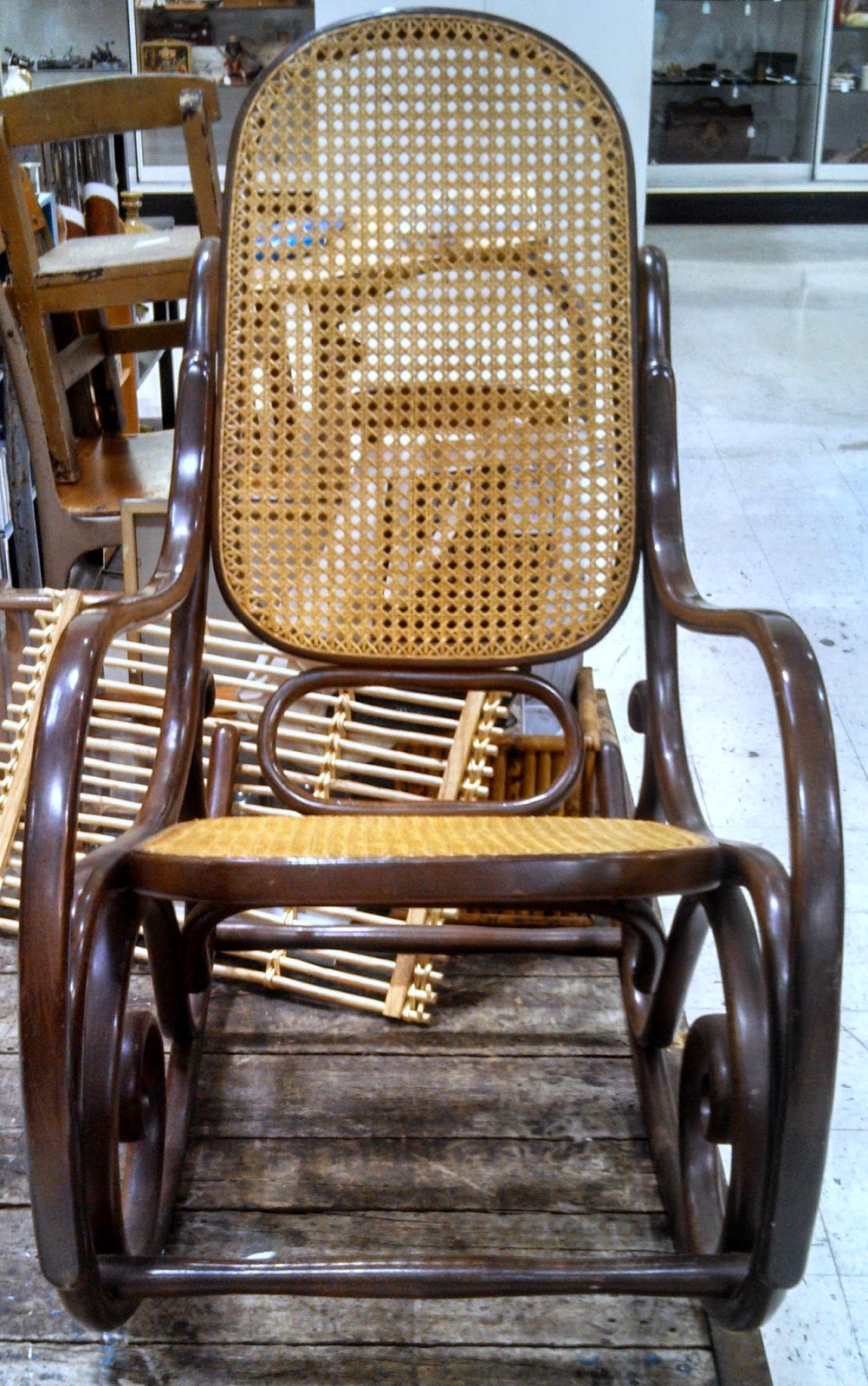 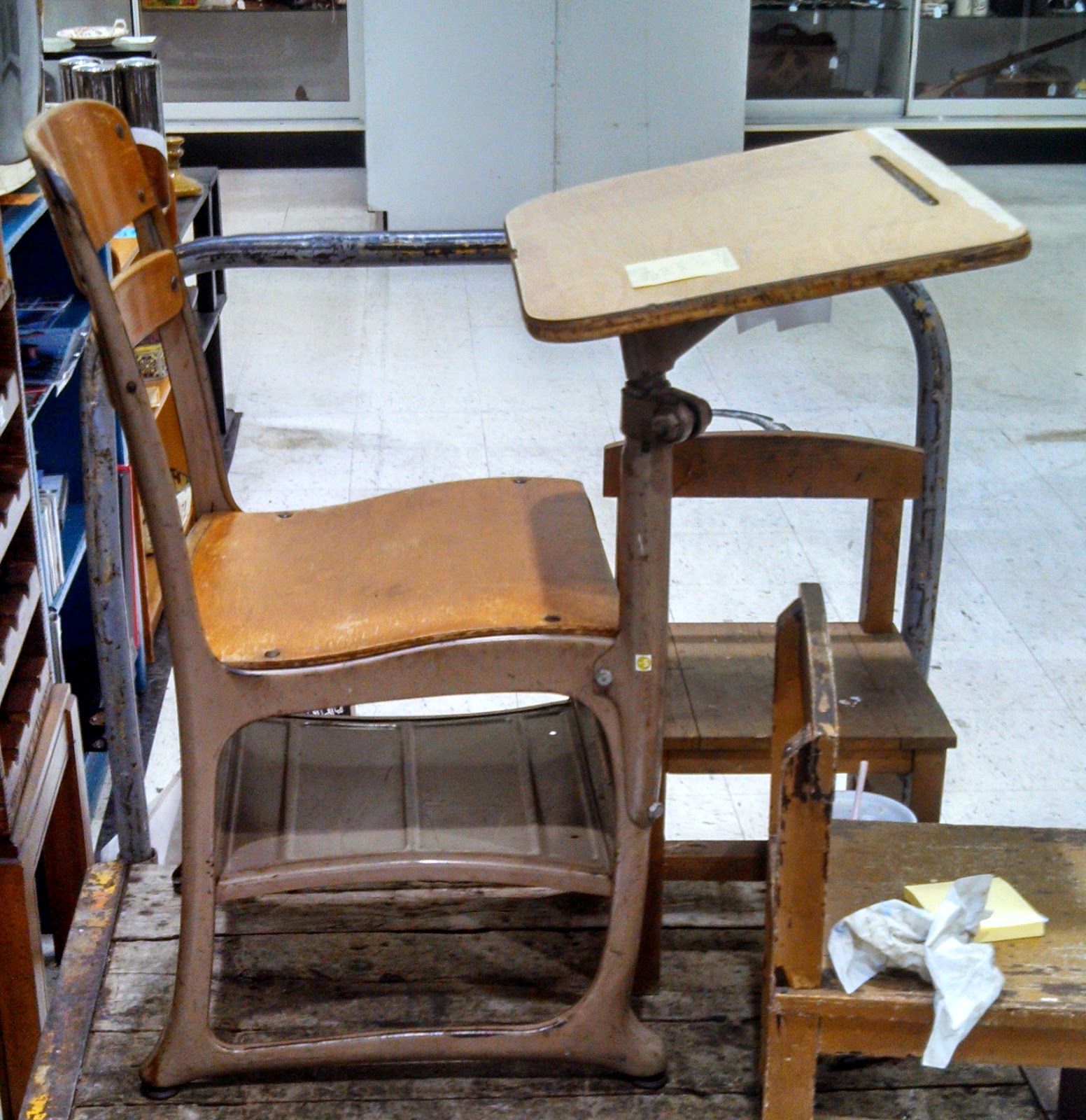 Both these came from the first stop.  The seller kept calling us "early birds" but we were there after his posted starting time.  I think he meant that we were the first ones there.  He was in "make an offer and I'll probably take it mode."  I ended up getting a few things from him.  School desks are my kryptonite.  Simply cannot resist them, even when I already have a couple in storage.  Keith said "Eddie's gonna buy a school desk." as soon as we pulled up and saw it.  More on those chairs in a minute. 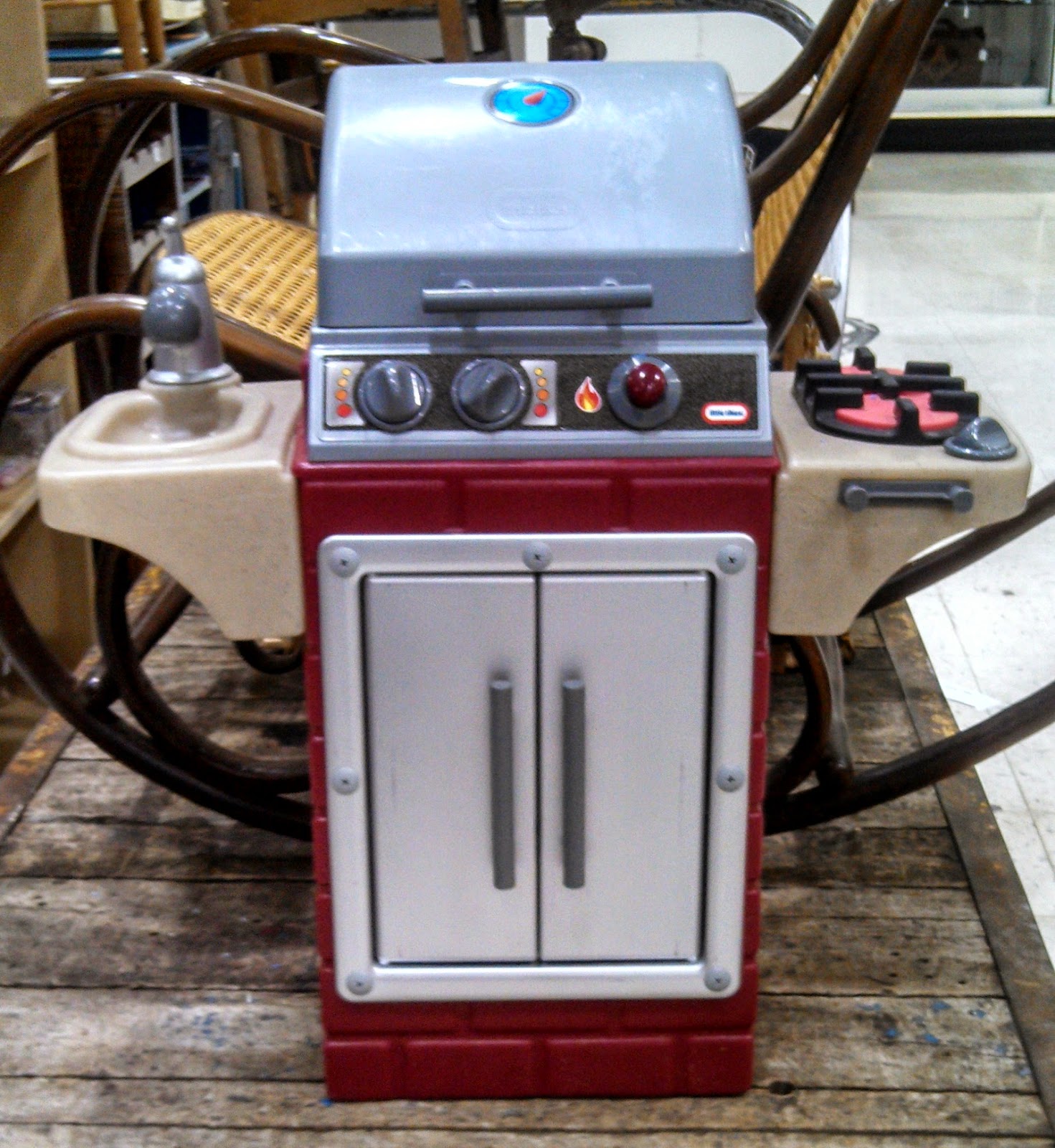 Little Tikes is a must buy for me, when I can find it in good enough shape and cheaply enough.  So many people come through the mall looking for good kid's toys with a lot of life left in them.  At the sale where I got this, a little boy of about six was in charge of selling the toys, with some hints from his mother.  I asked how much it was and he said "Three dollars."  His mother tried to tell him that I might want to make an offer on it, when I opened it up and found all kinds of play food inside.  He said:  "Okay.  The food is a dollar and the grill is two dollars.  That makes three dollars."  I had to buy it.

When I gave him the money, he said "Now I have 18 dollars!"  As we were leaving, his mother was trying to get him to sell all the toys that were left to this one girl for two dollars.  He looked the the girl, pointed to a box of stuffed animals and said:  "For two dollars you can have two of these and all of these toys here on the ground."  We were all cracking up. 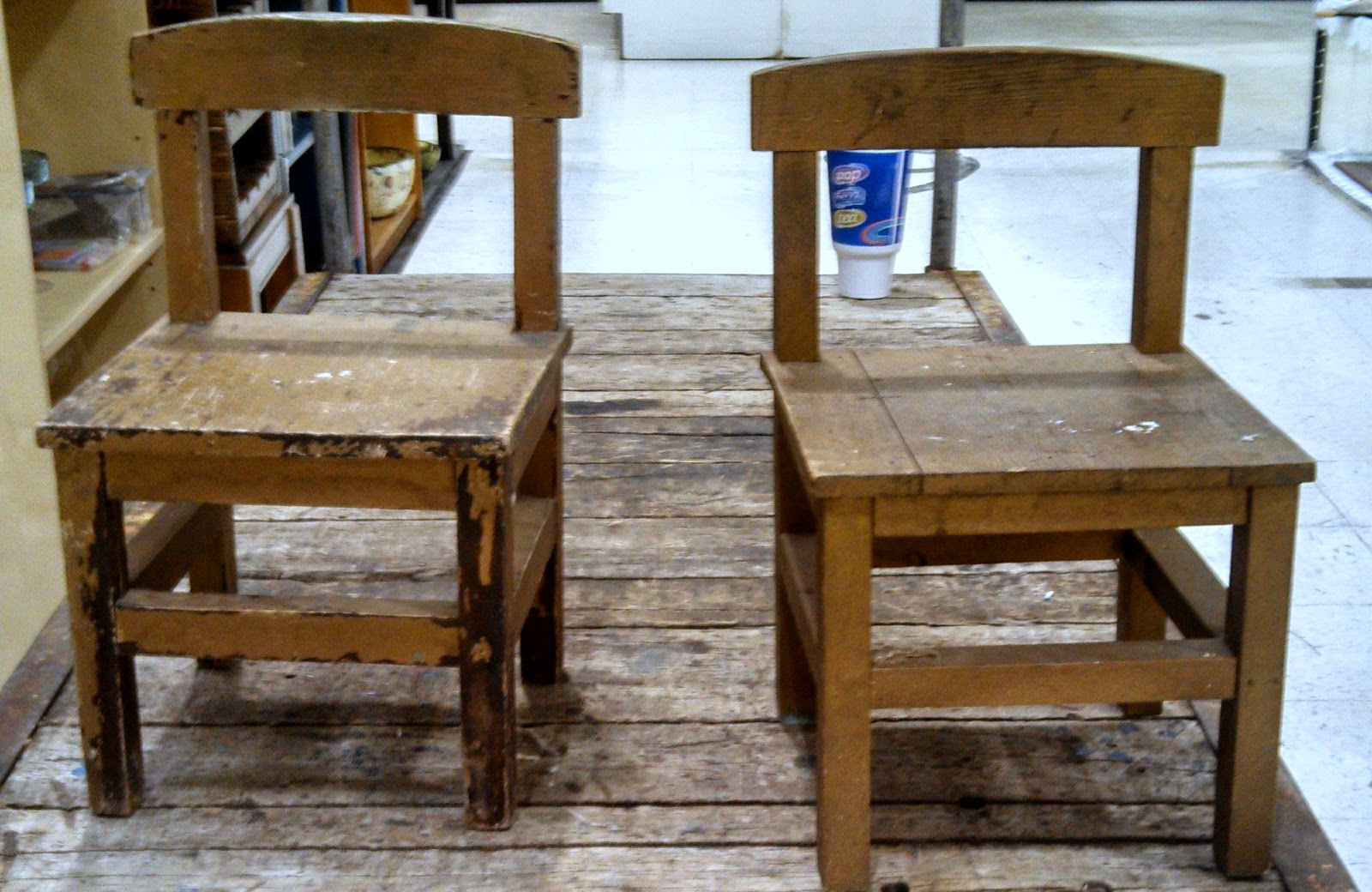 These were from the 75% off antique booth.  I got them for a really awesome price.  Kid's chairs are almost as bad for me as school desks, at least when they're this cute.  The paint on the one on the left is the most interesting gold-ish color.  Very intriguing. 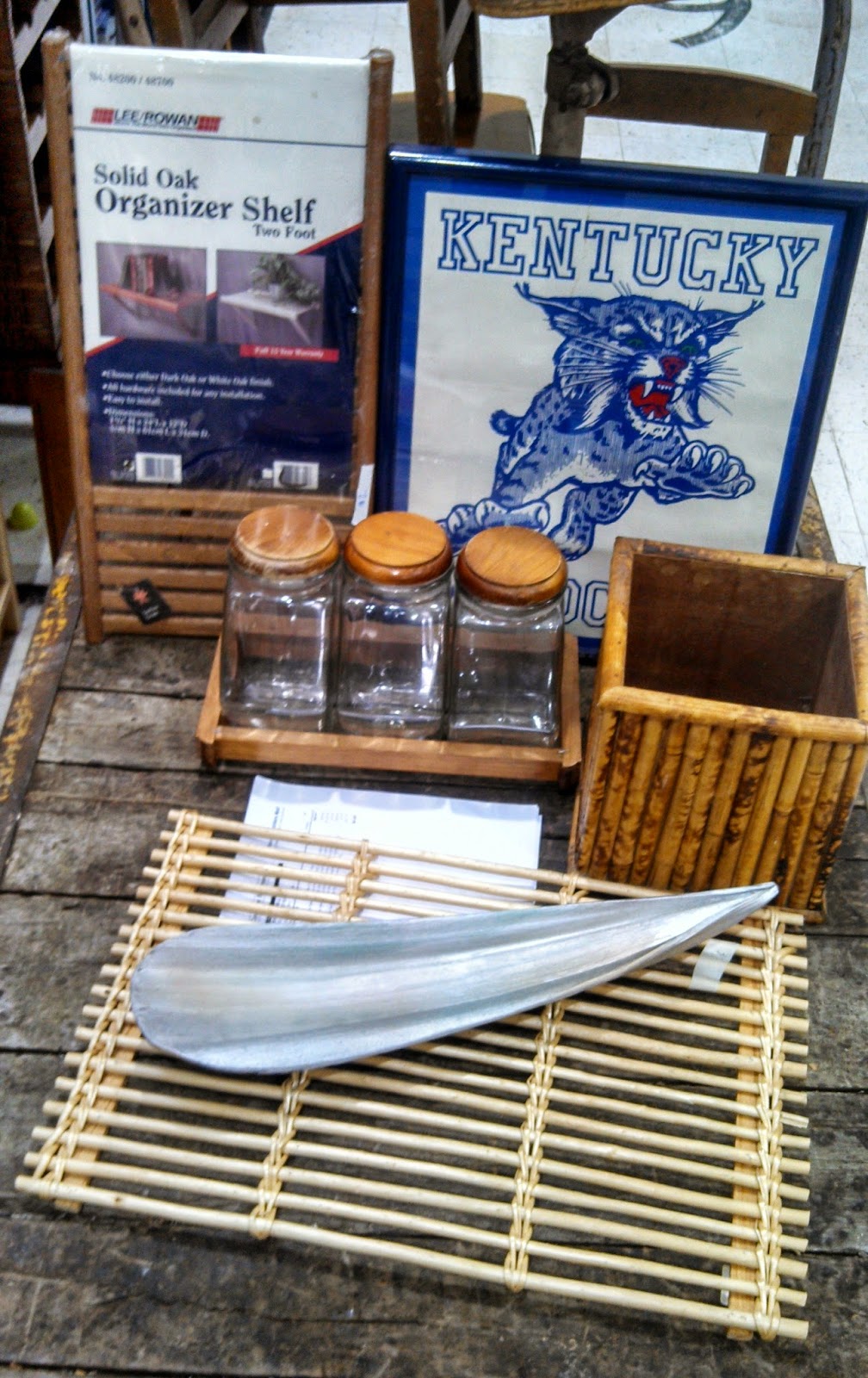 Finally, a few "bigger smalls."  I'll get to the best of the rest of the smalls tomorrow.  The canister set came from the first sale.  I also got set of square glass containers with wood lids from him as well.  The UK poster was my attempt at "if you can't beat 'em, join 'em."  It's an older design for the wildcats.  The little square planter sold right after I put it out.  A woman was buying it while I was getting checked out and the mall was closing.  The bamboo-looking tray on the bottom still had its original retail price tag on it ($49.99!--EEK!).  That white piece of paper is my sales paperwork from March.  I got my check while I was there.

I start my new treatments tomorrow.  I have to say again how thankful I am for all of the support that's been shown here on the blog, on Facebook, and in person.  It really helps.  There's nothing to do but keep going and hope this one takes.

It's supposed to rain all week here.  We're still under flood watches from all the rain last week, so I hope we don't float away.  At least it'll be nice on Saturday for the big community sale in our neighborhood and the MAJOR church sale across town.  I guess I'll be staying in and catching up on some reading.  Might be good to take it easy the first week of treatment.  Although, there is the lure of the 50% off Easter candy....

I do hope everyone had nice Easter and that the bunny was good to you.  It's odd to have Easter so early this year.  Now, I guess, it's onward into SPRING!

Sorry your sales are down and hope things pick up. Love the children's chairs. I feel the need to hit a thrift or two today. I need another shelf for my collections. Take it easy this week.

Good stuff Eddie. In my area it was the Easter long weekend and the sales were just a bit better than normal this past week. I have a 'chair thing' and have about 20 waiting to go in (lack of space, need fixing etc issues). I am trying to NOT buy any more regular sized chairs but I never pass up a child sized chair.
Joy

It SNOWED between Albany and Oneonta on Easter Sunday.

Rats! My Easter candy was only 30% off at Target today. Will try a pharmacy tomorrow!

I have to buy children's chairs when I find them - I keep some to hang like shelves on the walls and sell the rest. UK - I thought of United Kingdom and was searching the photo for British stuff.