So I couldn't go to any yard sales on Saturday....

...But I still found some stuff.

I spent part of Sunday working at the booth, which means I also did some shopping while I was there.  Shopping is a part of the work routine, after all.  I'm still figuring out where the booths with the best stuff and prices are, but I do have a few regulars already that I hit every time I go to the store.

I am so not one for planters, but c'mon!  Cute ducks!  She even has a bonnet on.  He, apparently, is naked. 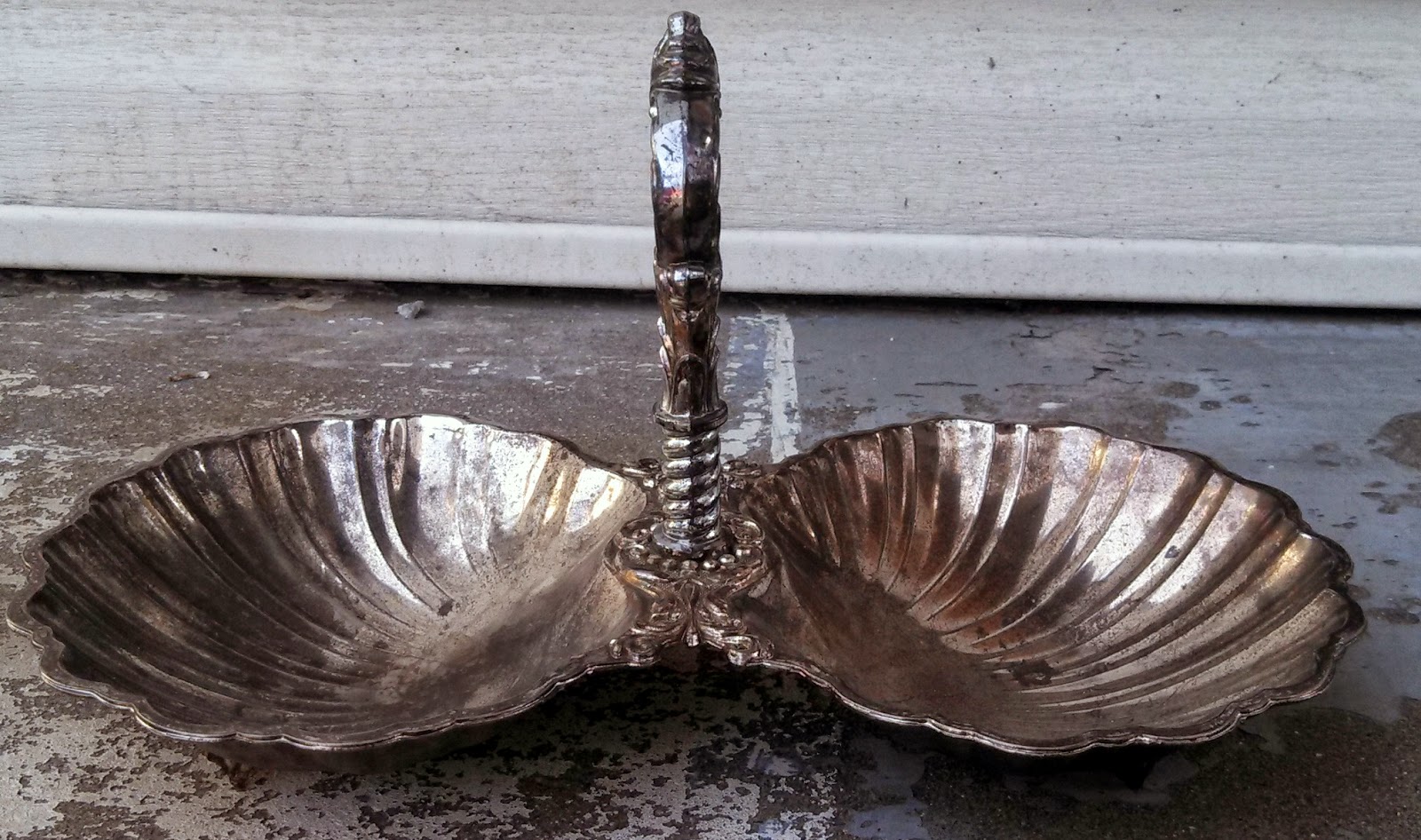 I honestly don't know what the re-sale potential of stuff like this silver plate shell dish is, but it was only 50 cents.

These flower frogs have some chippage, but it's mostly on the bottoms.  Still, at 50 cents each, I had to get them.


I've got no clue who this guy is.  My Greek is not so hot.  I'm not sure if the symbolism on Greek style icons is the same as for Western style imagery, but if it is, then the book would mean that he's a gospel writer.

This list is one the back of the picture.  There are twelve names, which would imply twelve disciples, which gives more substance to my theory about the saint in the picture.  I'm not sure how to translate Greek online, but I'll give it a shot.  I totally flunked Hebrew in seminary and never even made it to Greek, so I'm flying a little blind here.  I'm not good with languages that don't use the standard alphabet. 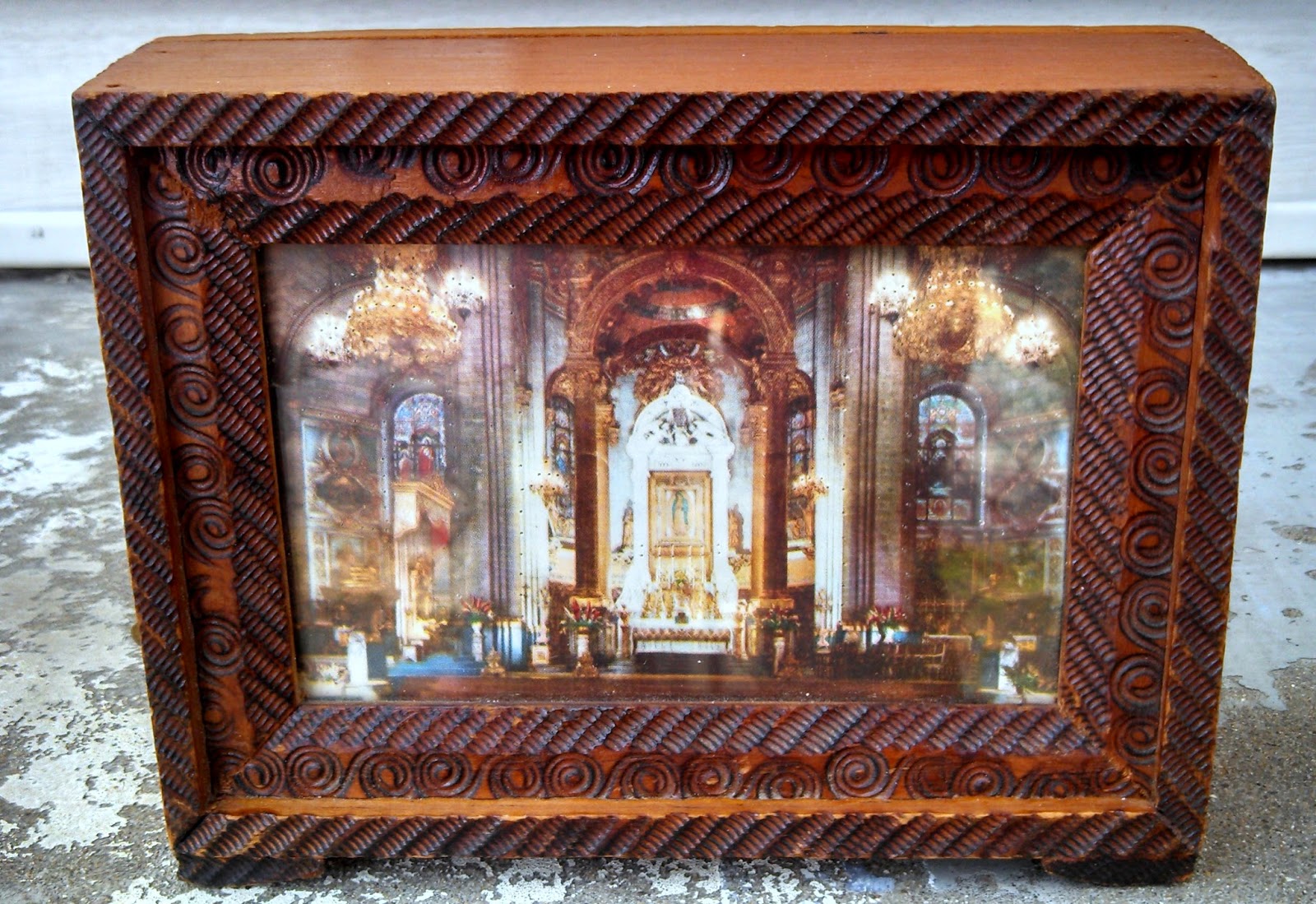 Finally, this sweet church scene, which is really a vintage night light.  I love the carving on the box.  I need to test this baby and see if it works.

So Monday, I went to Goodwill.  Well, I had all that money from the sale! What else was I going to do with it? Invest? 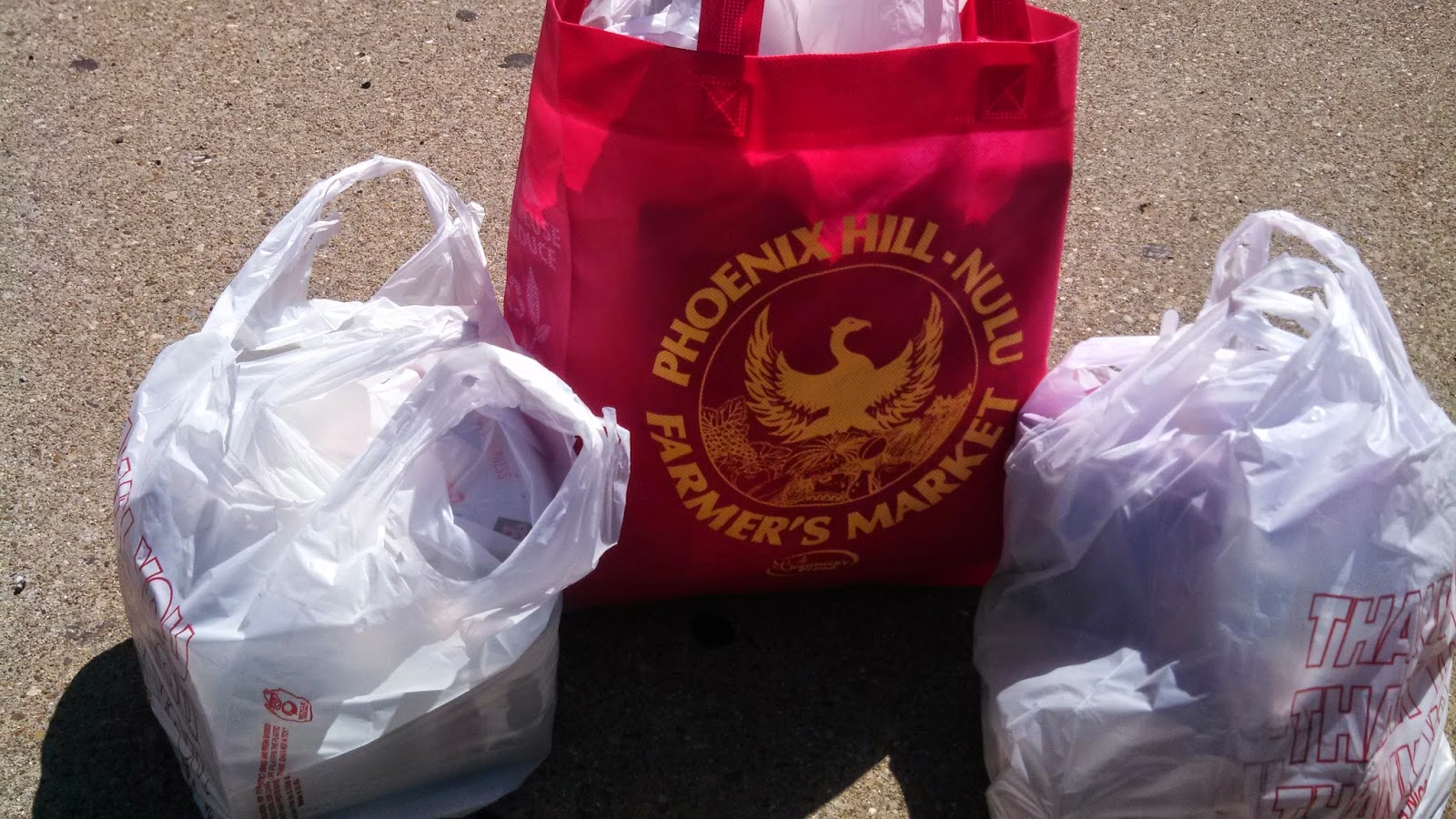 Not much to find there, but I did get some stuff.  This Goodwill remodeled last year, and lately they've been rethinking their pricing.  In the past, it's been hit or miss, but lately nearly everything is reasonably priced there.  I'm starting to head over there on a regular basis again. 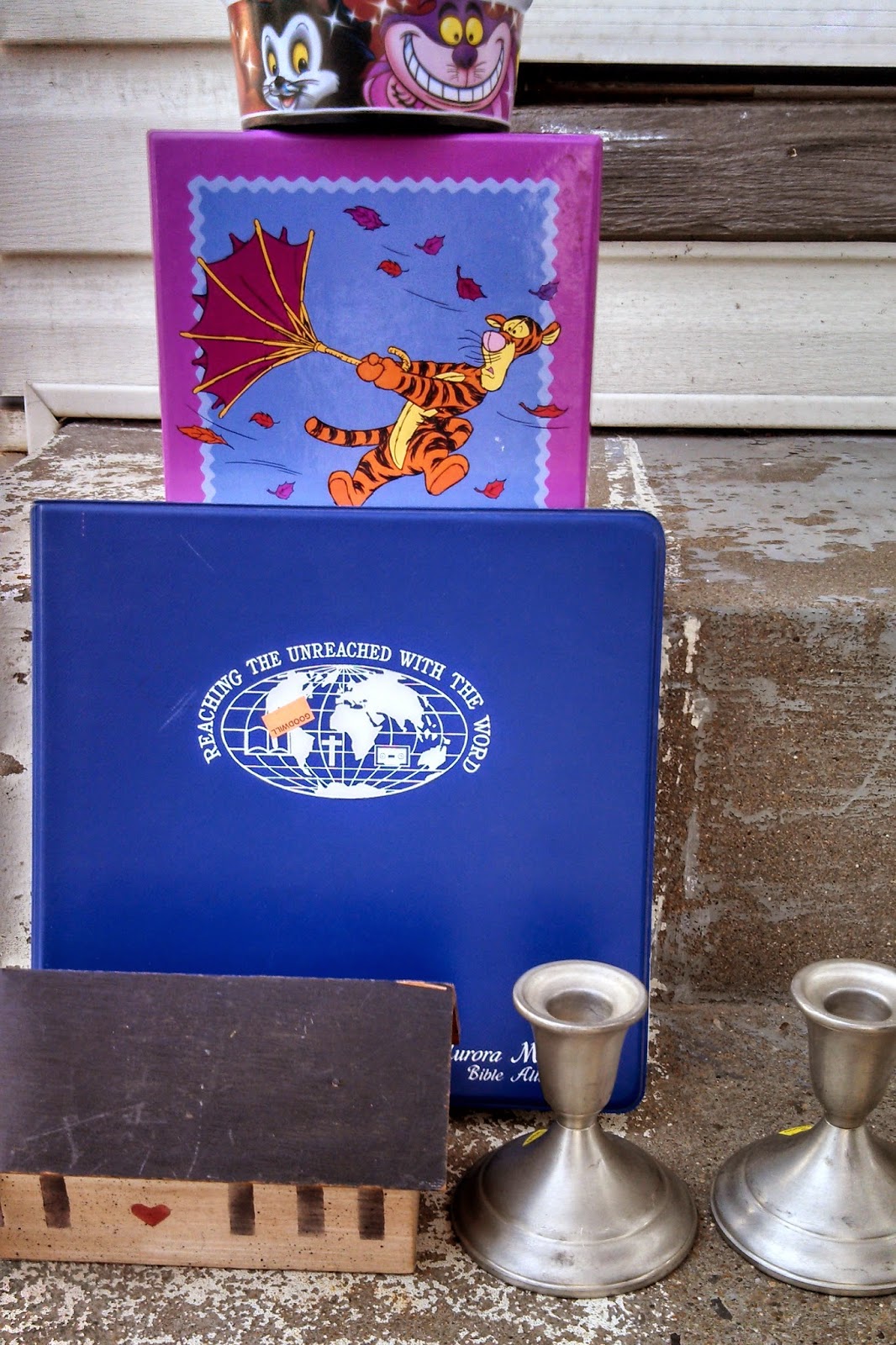 I've been finding a lot of those Bible on tape sets lately, which is all right by me!  I always get nervous when I try to buy them at Goodwill.  Tapes are supposed to be fifty cents each, but the price guides don't say anything about tape sets.  If they ever end up being 50 cents per tape, then I'm out of luck.  It takes a lot of tapes to record the Bible, you know.  So far, though, I've managed to get them for 50 cents for the set!

The dish at top is a cat dish with Disney cat characters on it.  I'm keeping it hidden from Chiquito.   I try to never pass up anything with Winnie the Pooh characters on it, hence the box.  The candlesticks are pewter, a material that I am way too fond of.


I've also hidden this adorable kitty wrapping paper from Chiquito.  He'd never let me take it out of the house to sell. 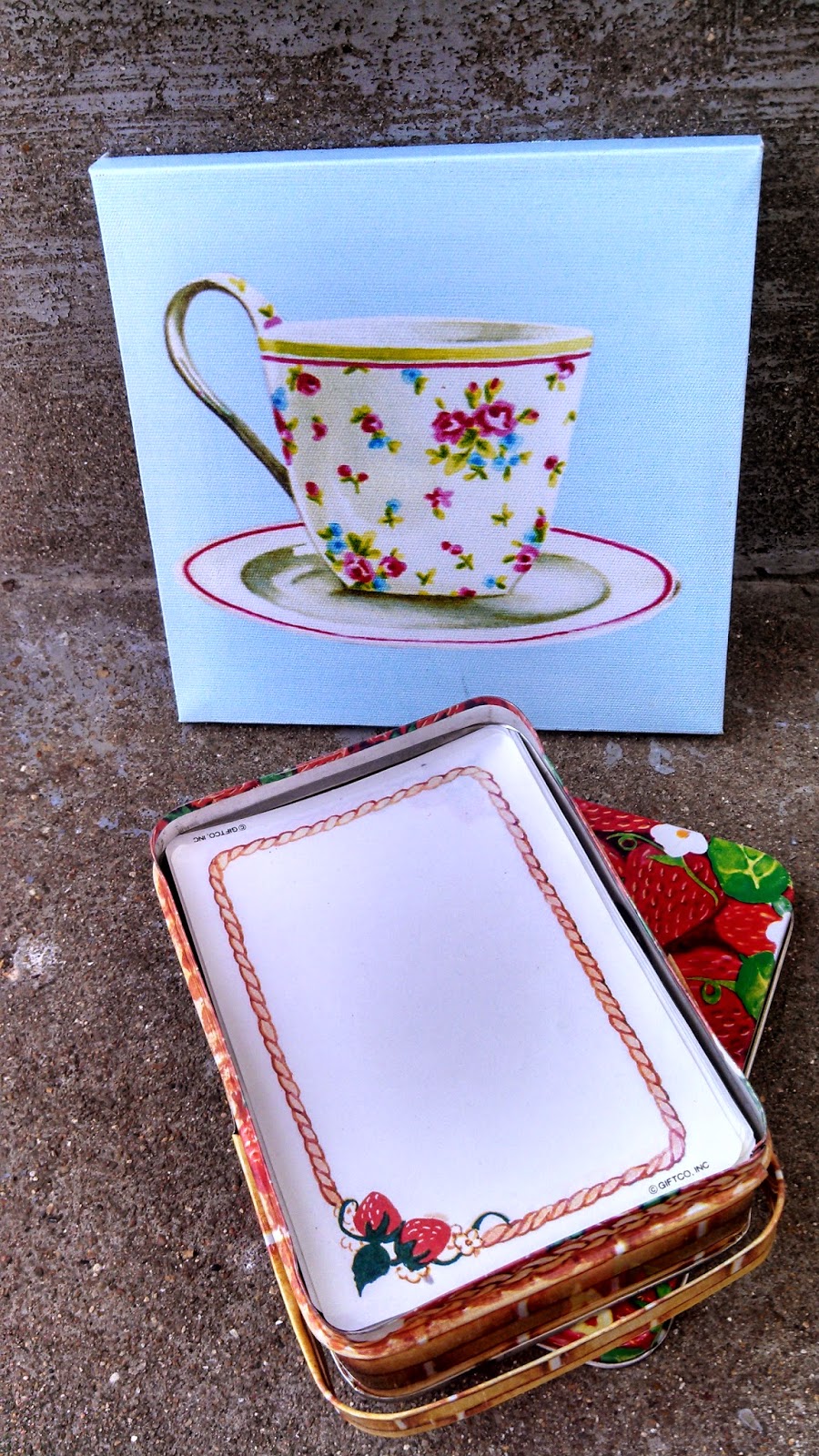 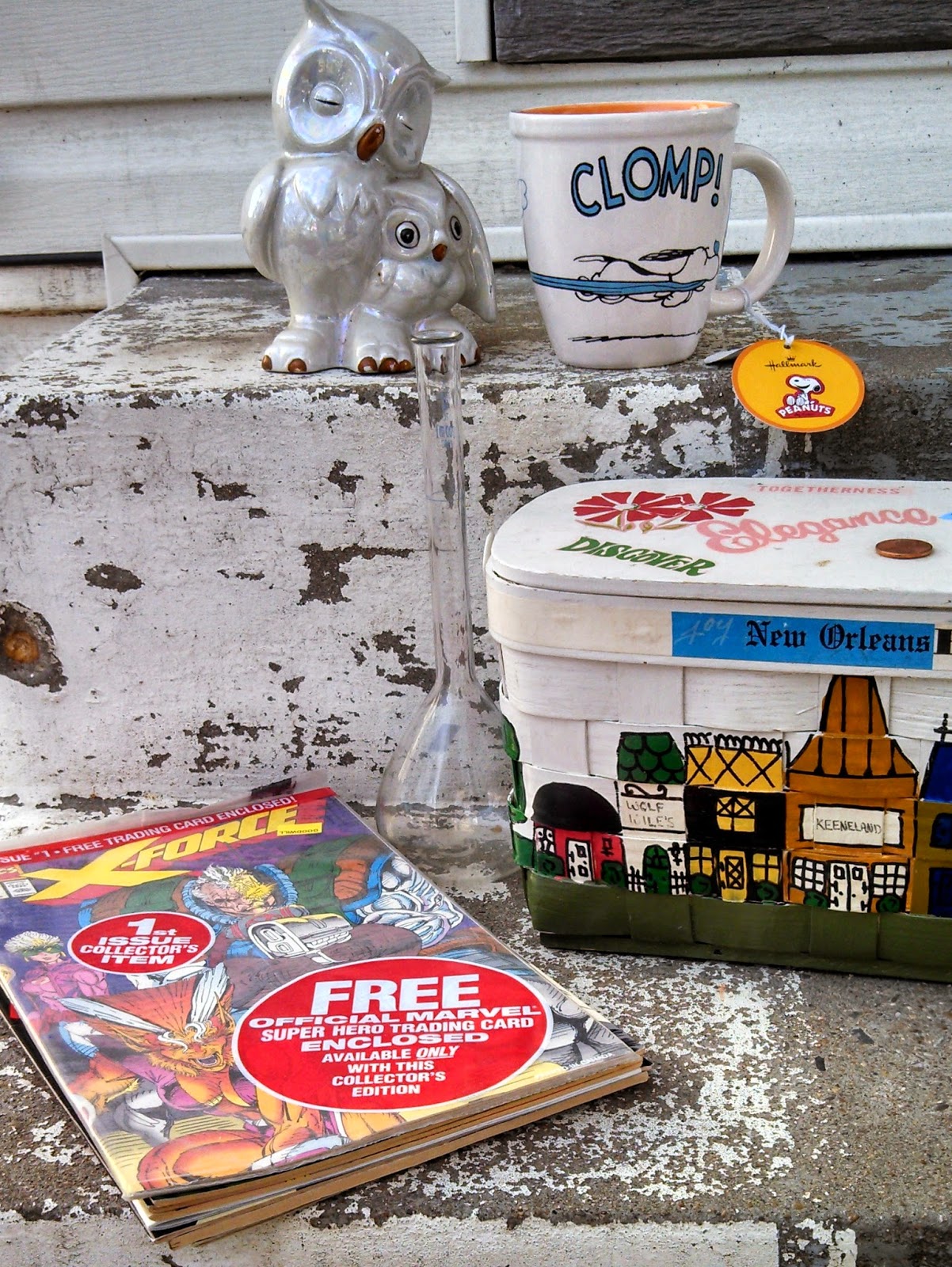 I think the owls were a night light at one time.  There's a small notch on the back for the cord to go.  I hope the owl trend hasn't died yet.  Snoopy cup?  Yes, please!  Small stack of comics, priced normally for once.  Usually this particular Goodwill is a good source for comics and manga at a decent price.  The other stores will have them, but the prices are unreal. 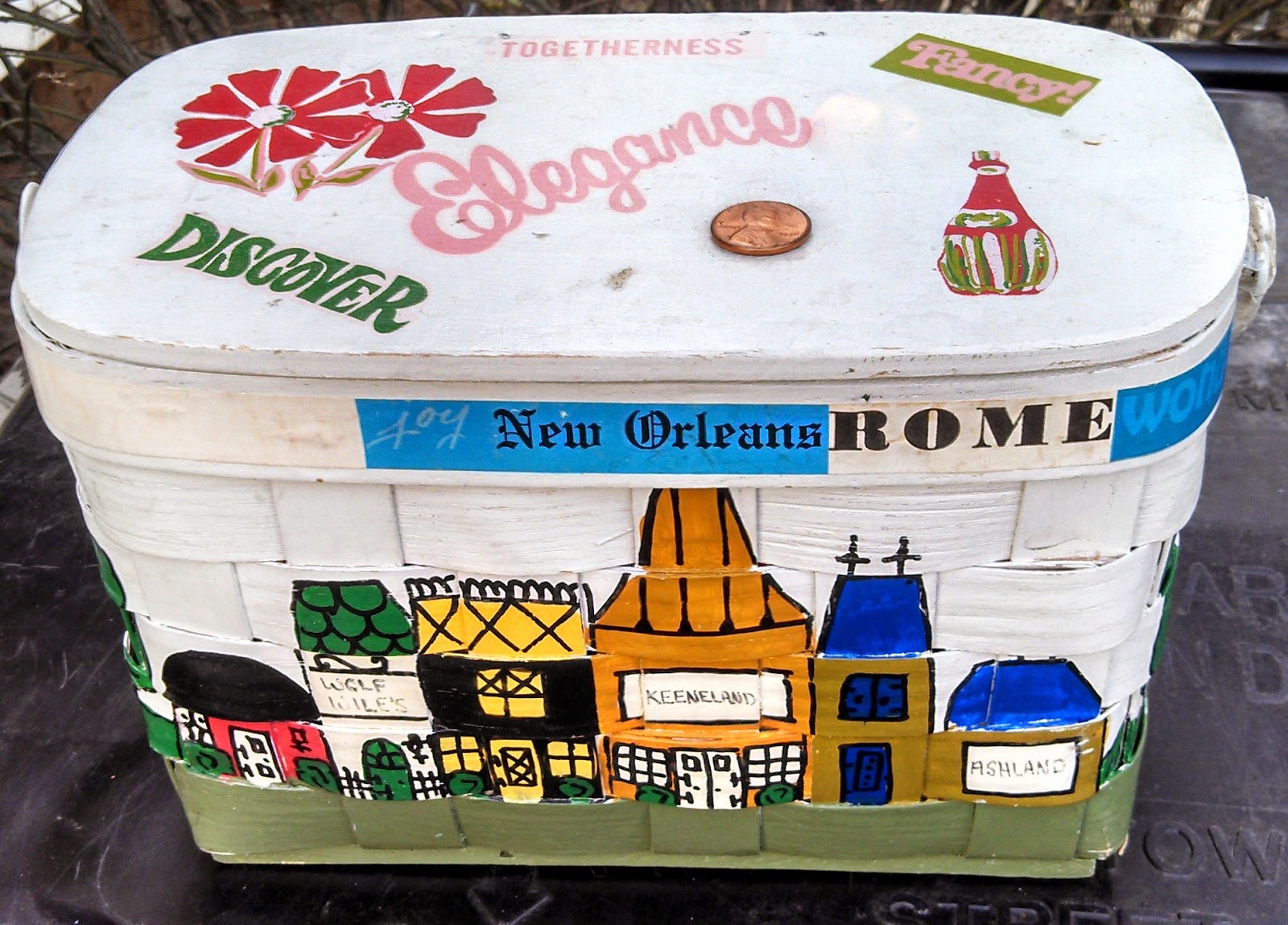 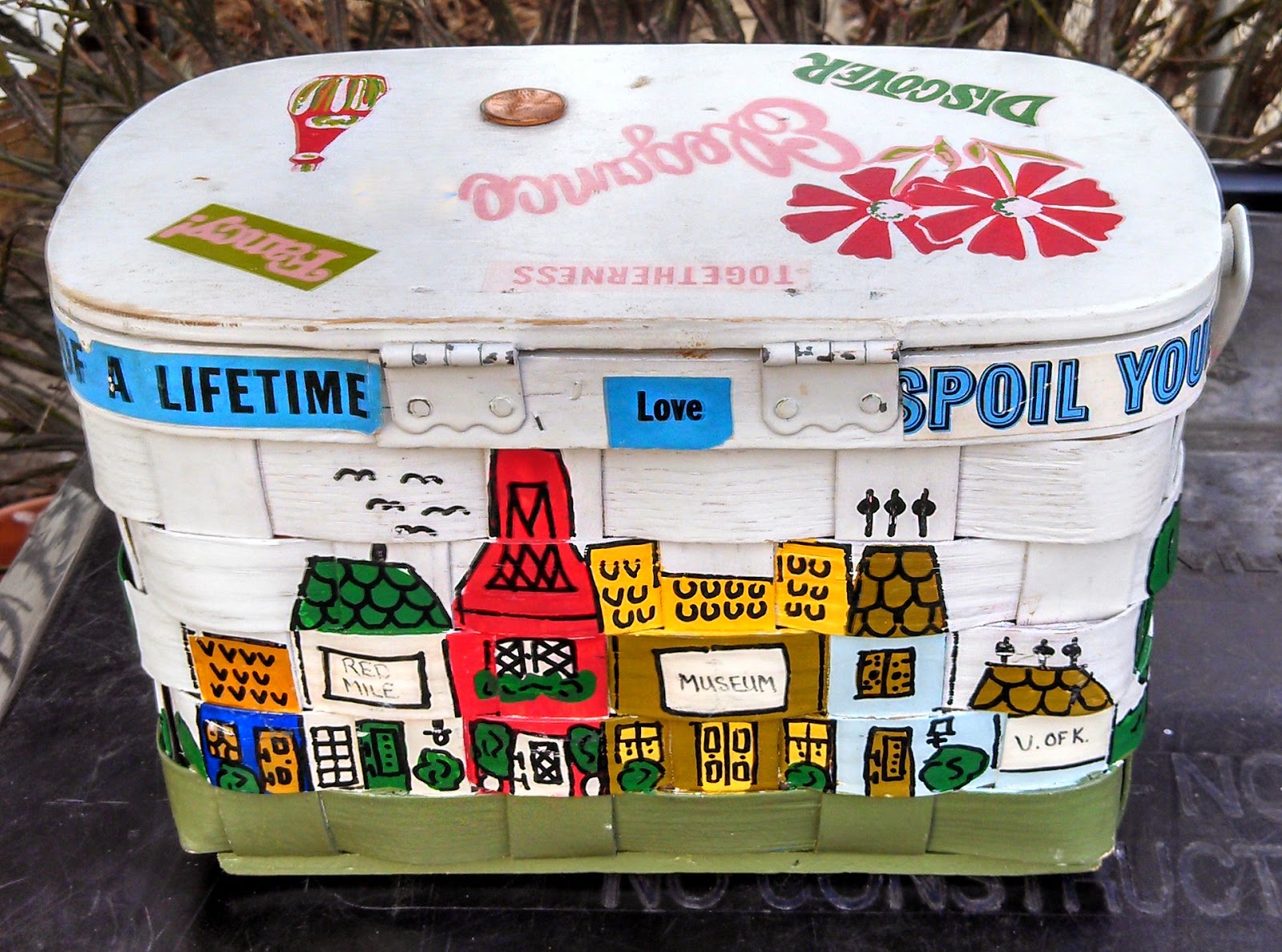 The labels on this painted basket may say "Rome" and "New Orleans" but all the places painted on the sides are from Lexington, KY.  This must have been someone's college memento, I think.  It's one of those things that is either  so quirky and unique that someone will love it right away or so personalized that no one will ever buy it from me.  Gotta take the chance, I say!

An interesting (albeit perplexing) thing happened while I was at the Goodwill.  There was a woman wandering around the store a few feet in front of me.  She had a few items in her hands.  Suddenly, she turns, walks over to the office door, bangs on it, and demands to see the manager.  Why, I have no clue.  One minute, she's shopping.  The next, she's storming the office.

The manager says that it will be a few minutes.  She's trying to get a problem straightened out at one of the registers.  The woman waits a few minutes, paces around, waits some more, then goes back to shopping!  Eventually, she gets in line, right behind me.  The manager finally comes out and walks by both of us.  The woman never says a thing to her.  The manager starts ringing people out because there is a big line, so I let the woman go in front of me, so I can finally see what this is all about so that she can talk to the manager, but she never says a word to her.  At all.  Only in a Goodwill.

Finally, my pitiful haul that I brought up in my whiny post last week.  It's not really worth the blog space, but what the hell?

The woman I bought the ornaments from whispered to me that "They're fifty years old."  Yes.  Whispered.  Like it was a state secret or something.  I wanted to whisper back "I am too, but I don't care who knows."  They're in rough shape, with what looks like mildew spots on the inside.  I'm afraid to even attempt cleaning them.  After all (whispering) they're fifty years old.  Maybe I should stop taking showers for the same reason.  Who knows what could happen?

The Pee Wee Colorforms are mostly all there and have been played with.  The set was only 25 cents, so why not?

You really got a variety of stuff - love the scene night light - hope it works! Good luck at the estate sale, I surely wish I could go to one but I have grandkids coming today to babysit until Sunday. Their brother is off to Atlantic city to play basketball! Oh, and Easter baskets and plastic eggs to fill!
Happy Easter to you, too!

Eddie I love seeing your eclectic finds. Naked duck planters just might sell...LOL! I have one Goodwill near me that seems to price a bit better then the other one. It is still hit or miss though. Keep shopping my friend!
hugs,
Linda

Showering at your age could result in the glitter washing off your balls. I mean ornaments. :D

Hi Eddie. Good finds. The thrifts in my area are raising their prices. That slows things down. You do find some good stuff.
Hugs.
Joy

you are a fascinating man

Colorforms, I whisper reverently. WOW! I am really surprised they were even made during Pee Wee's reign. I thought they stopped long before that. I will have to look that up on Wiki! Good haul!

I'm pretty sure the owl trend is still alive and well. I know I still get excited when I see something with an owl on it.