So this is how I spent my Friday.

(I kind of wish I had a theme song for this kind of thing.!)

Part of a successful yard sale is putting time into preparation and organization.  I had already selected the items to put in the sale, so now is the time to clean everything up and price it and organize it for easy set up.

I decided to sort a lot of things out by table instead of pricing every individual item, since I have a lot of smalls in this sale.  I'll have a 25 cent table, a 50 cent table and a dollar table.  I wanted to sort it all into boxes for each table.  Plus, there were larger items to price.

I've come to the point in my life where I don't feel the need to have everything that I own.  I'm not changing who I am as a big old nerd dude who reads comics, loves cartoons, and likes cool toys and such.  I simply don't have the completist collector vibe any more.  The thought of moving all this stuff again makes me kind of queasy.  So much of this has not been out of the boxes in so long that I had forgotten I owned half of it.  I felt like I was discovering treasure!

What I've done is made myself pare down things to my absolute most favorite pieces.  I've set those aside (which amounted to about 1/3 of the overall lot).  My goal is to find a way to display the down-sized collection in the house once this is all over.  I'll probably end up paring it all down again before that happened.

I took a bunch of what I culled for the booth, but there was too much to funnel that way, so the rest is in my yard sale.  I figure that whatever doesn't sell can still head to the booth.  This is kind of like an overstock deal.  I'm not so much worried about the money I'll make as I am getting rid of this stuff.  If I can get a hundred bucks or so, I'll be pretty happy.


I'm putting a lot of anime stuff in the sale, mostly Sailor Moon, which was always my favorite.  When I got into anime, I became a huge fan of shoujo stuff, especially magical girls.  I've always kind of liked the sweetness of the genre and its tendency towards campiness and kitsch.  I'm going to craft my Craiglist ad to try and draw in the nerds and hipsters who would be interested in this sort of thing.

There are a few Pokemon items.  The original series came out when I was really getting into anime, but it wasn't really a favorite of mine.  There was too much of a forced completism thing going on for my tastes.  Don't tell me I gotta catch 'em all.  I'll decide that for myself, thank you.  Still, I always thought Pikachu was really cute, and I do have some small Pika stuff, but that is the extent of my Poke-madness.  Well, except for Jigglypuff. 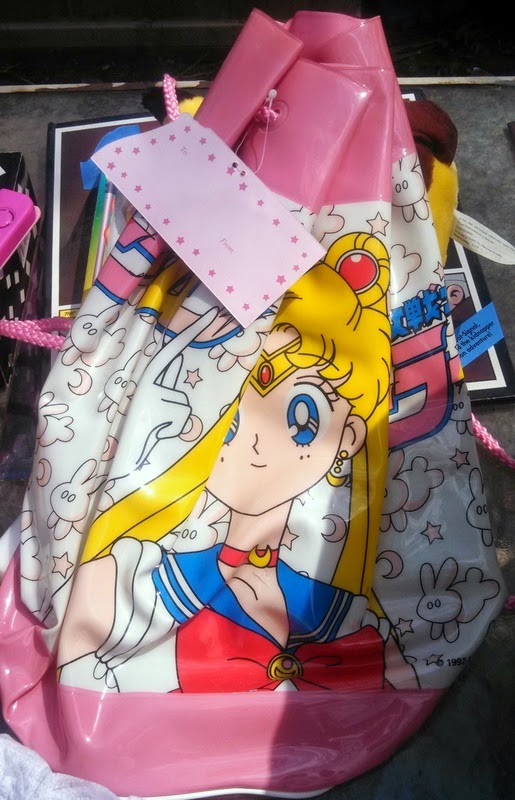 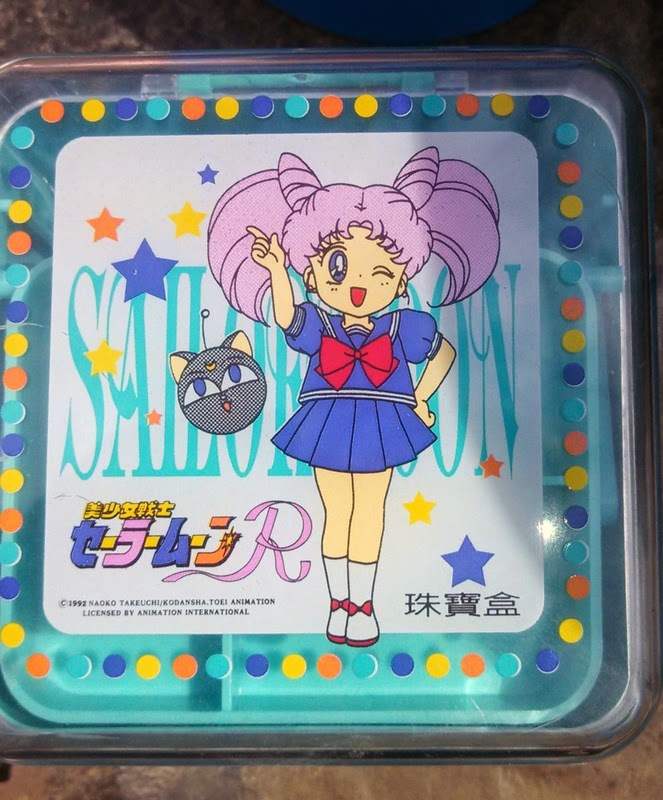 I do have some vintage in the sale, like this snowmobile jacket. Yes, I know that spring is the wrong time to try and sell a leather jacket.  I'm an optimist. 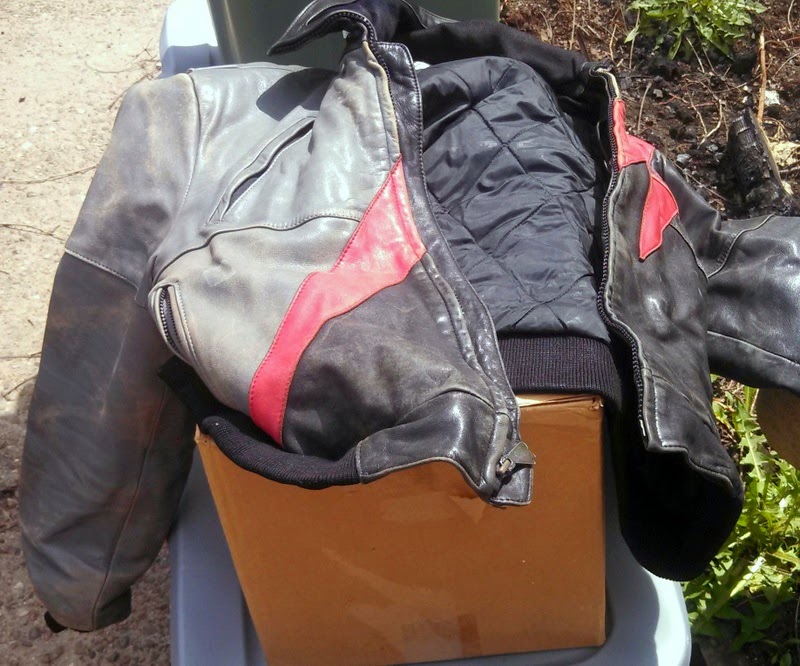 I'm also putting this old chest in the sale, too.  I figure it will attract some interest.  We have a cedar chest that Keith's grandfather made in the bedroom, so I have no need for this one that I bought in a yard sale ages ago.  It has a loose hinge on the lid, so I'm selling it "as is." 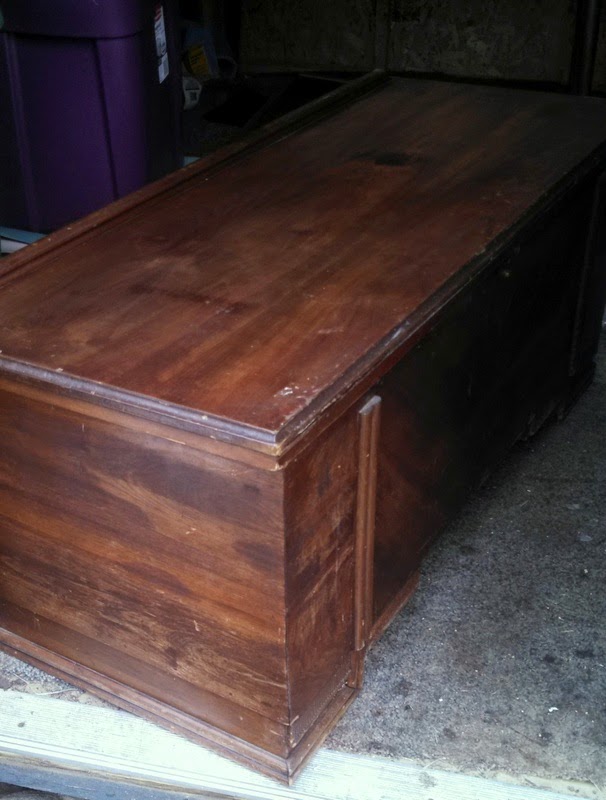 I'm also putting a lot of books in the sale, mainly my mother's.  I was going to add some of mine as well, but I have three good sized tubs of Mom's, and I figure that's enough.  I'll save mine and have a book sale later on.  I actually figure I have enough stuff to have two more sales this season, which is the most you can have in one year in Louisville.  I've only cleaned out a third of the shed so far.  The rest of it will give me enough for two sales, a good sized Goodwill donation and enough extra stuff for the booth to keep me rolling on smalls well into fall.

With the small stuff covered like that, I'll be able to specifically hunt for furniture and vintage when I go saling and thrifting.

Finally, we're done!  I know that looks like the first pic, but trust me, it's not.  For one thing the angle is different, silly.  The real difference is on the inside of the tubs and boxes.  It's all sorted and organized, guaranteed to make set up a breeze!

Empty boxes for recycling mean downsizing has occurred!  Yay!  It all took a lot less time that I thought.  I was even able to pull a few more items out of the shed for the sale.  By the time you read this, I'll be in throes of running the sale, so wish me luck!

I'll have pics and a report either tomorrow or (more likely) Monday!

By the way, I know those photos make it look like the shed is still packed to the gills, but it's not.  One side of it is nearly empty.  I just put everything back right inside the door to make it easier to get to in the morning,

Email ThisBlogThis!Share to TwitterShare to FacebookShare to Pinterest
Labels: Pikachu, Sailor Moon, selling, this is how we do it, yard sales

By the looks of your merch, you should make more than $100. Love the plush Pikachu! Good luck today. It's funny how some people come to that point in their lives when they decide they don't want anymore stuff. Don't want to dust it. Don't want to store it. Don't want to move it. Those that never have that epiphany end up having all their stuff picked through by strangers when their estate goes up for sale after they die. You can't take it with you when you go. Enjoy life!

so much work for an uncertain outcome/income; this is why I hated doing shows outside the store, where you'd have a regular customer base.

Good luck! You have a good mix of items. I'm getting ready to get ready to have one myself. As a person that loves GOING tot hem, I LOATHE having them. But, I like $$!