I kind of failed as a junk blogger (again) by not taking pics of some of the more interesting things we encountered over the weekend.  Seriously, one sale had more plungers than I've ever seen in one place in my life.  I guess I'm still getting in the groove of things.  Or maybe I'm just a bad junk blogger.  In lieu of those pics, here's the story, plus pics of the finds.

Perhaps the best seen, but not bought, item over the weekend was also at the plunger sale.  There was a white, satiny sash with the word "Bride" on it in glittery letters.  Because, you know, she's often so hard to pick out from the rest of the wedding party.  On the way back to the car, I told Keith that I really should have gotten it to wear at our wedding.  Or at least modeled it for a pic.  Bad junk blogger.

I had a big dilemma early on Saturday:  Go to the estate auction that started at 9 or follow the list of sales?  I've been moaning about needing to get more furniture, so the estate sale seemed like a good bet for that.  There were a bunch of high end large pieces, but also plenty the kinds of stuff I like:  odd dining room chairs, side tables, small shelves, etc.

Inexplicably, the auctioneer started with the flats and boxes of smalls, instead of the larger stuff.  After watching flats of nice, but not that special glassware, go for $30+, I realized that most of the crowd was either newbies driving up the prices or folks looking for stuff for themselves and not really caring what the price got to as long as it was less than regular retail.  Can't compete with that, so we split.

I really do need to hit more auctions, though.  It's just hard when the best ones are happening when I'm working, especially in the evenings.  Hopefully, I'll be able to do more in the summer.

One of the sales billed itself as the "best sale of the year."  Naturally, it was pretty much a bust.  I did buy a chair there, because it was furniture and it was cheap and I'm sure I can sell it.  It's also hideously ugly.  I don't have to like things to sell them.  At one point in time, it was a pretty ordinary chair.  Then someone "upscaled" it by painting it pink. 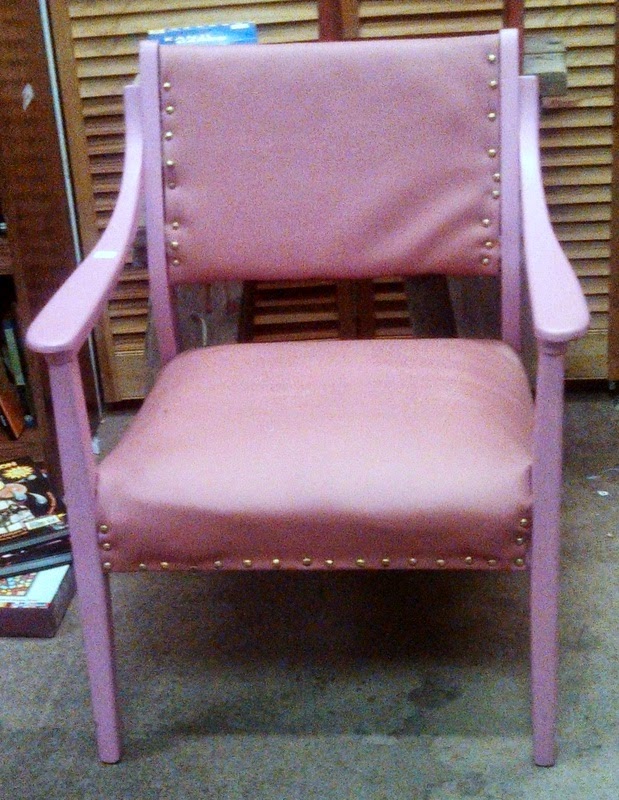 Or at least "upscaling" was the intent.  It might have happened too, with a better paint job and color choice.  Instead, it's a case in point why I'm leery of this redoing, repainting trend.  For every excellent, truly upscaled piece created by someone with talent who knows what they are doing, there are tons of hideous pink chairs.   Still, like I said, I can sell it, and that's kind of all that matters to me.  I sell lots of things I love and some that I'm not so fond of.  It's part of the job.

Another sale advertised that the person was getting rid of "1/4 of everything" they owned.  I decided that someone might need one of my fraction lessons, because there just wasn't that much stuff in that yard.  Either that or there's a really big house that's already practically empty. 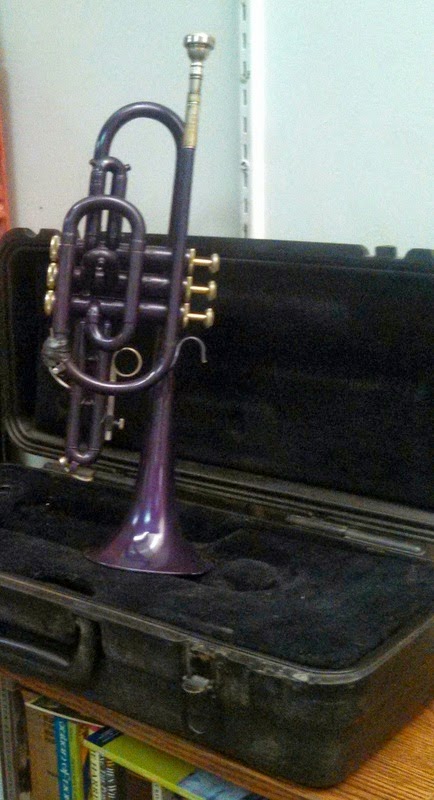 I bought a cool purple trumpet at this sale.  I kept calling it a bugle, even after I asked Keith for sure what it was so I wouldn't embarrass myself and he informed me that bugles don't have buttons.  Yet, right after getting his sagacious clarification, I said this to the seller:

She responded:  "Oh, do you play the trumpet?"


I also got several small corkboards from her.  Those sell well for me, and I happen to be out of them.  (I found a couple in the shed Sunday, along with a small whiteboard, that I'm adding to that stash.)  Before leaving that sale, I totally lost my mind, by buying something truly questionable because it was only 50 cents. 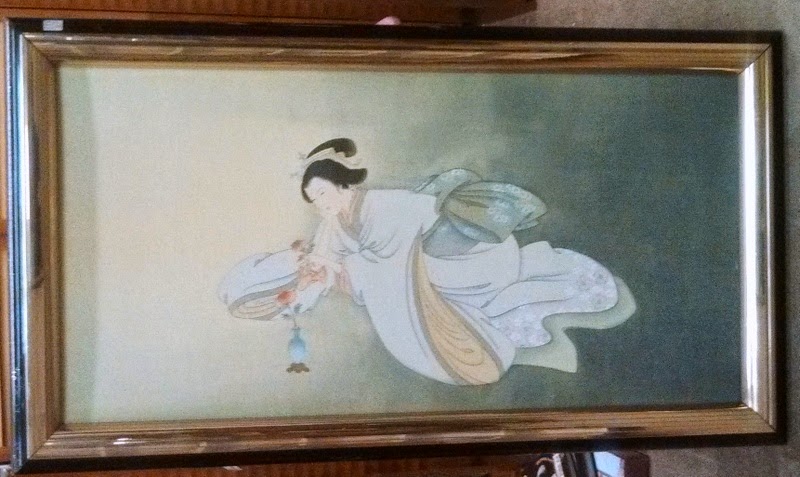 It's the epitome of 80's sofa art, right down to the plastic black and gold frame.  And it's HUGE!  What the hell was I thinking?  It might be time for the intervention.  (On the other hand, I sold it last night, so I might be on to something.) 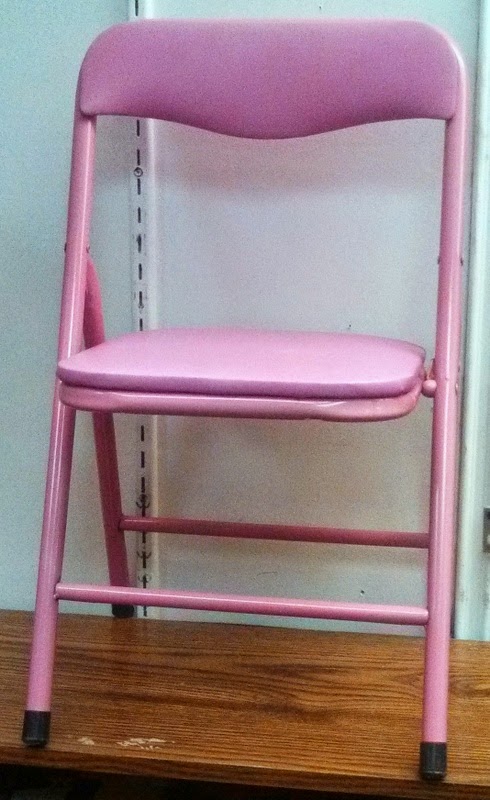 We passed several sales that had not been listed on Craigslist before we set out Saturday morning.  That's a sure sign that we're getting into the season, indeed.  I managed to find items at several of them, too.  In addition to hideous things, the other theme of the day seems to be pink chairs.  I got that one by practicing the time-honored negotiation tactic of walking away.

I asked the price and was told, "I don't know, two-three dollars?"  (Don't do this people!)  There's too much uncertainty in that for me to even want to deal with, so I said I would think about it, browsed a tad longer, thanked them and headed to the car.  "I'll take a dollar for that chair."  BINGO! 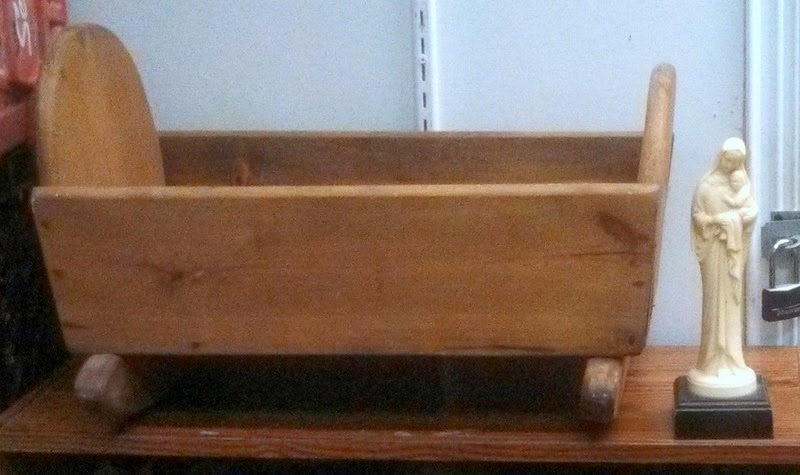 I planned our route so that the last sale would be the one closest to the booth, to make an easy drop off.  I avoid backtracking and looping as much as I can.  We ended up driving by the indoor/outdoor weekend flea market on the way and decided to stop.  I'm kind of glad we did that, not because I bought a lot of stuff (although I did find a few things), but because it brought back happy memories for both me and Keith.

He was reminded of the outdoor flea markets we went to in Mexico City, which were a lot of fun.  I spent the time wandering the outdoor rows, remembering my father.  There used to be a ton of these kinds of flea markets in this part of town, and he and I went to all of them when I was a teenager.  He loved them.  I loved them.  It was one thing we had in common during the period right after my parents divorced and my relationship with him was really strained.   Back then, you could still find mid to late Silver Age and early Bronze Age comics for less than a buck at those kind of places.  It was good to remember those days for a little while.

Next to the flea market was a VFW with a flea market in the basement.  They kept trying to sell us bullets, which was kind of creepy.  They said the back room was fill a bag for two bucks, so I filled a couple.  Always glad to oblige when there is bag filling to be done.


The last sale we hit was sponsored by the deaf community.  All of the sellers were deaf.  My sign language is pretty limited:  "Thank you."  "You're welcome."  and "Jesus."  So I bought a Jesus picture and said "thank you" for it.

My fave find of the day was this big bag of HUGE plastic bugs.  On the one hand, they're bugs and bugs are creepy.  On the other hand, the scale of these suckers makes them kind of awesome.  They will fly right out of my booth.


When I got to the booth to unload, I showed the manager the trumpet.  She said:  "You know weirdos are going to put their mouths on that."  As long as it sells, I'm kind of okay with that.


I gotta run.  I'm supposed to be hitting the road with my mongoose.  He's already packed our bags.  We might take the trumpet and make a tour of it.

Purple trumpets and pink chairs, Jesus, Pokemon and giant bugs. You sure buy an interesting mix of things Eddie! :-)

I love your rambles and you gs/estate/flea stories. I know they are so true. Love the spin. Bugs are good, so are giant wire spiders.
Joy

Have a fun trip wherever you go!

Also - did you research that trumpet/bugle/coronet before you put it in the booth? I see some one eBay for $200+.

Thanks for the very entertaining post! I laughed and smiled as you describe things and yet you always seem to find some great deals. No to the creepy bugs for me (LOL) but a yes to the buggle I mean trumpet!
Thanks for joining TTF!