I finally decided to take a geographic approach to my sales quandary on Saturday.  I went to the furthest out sales first and then worked my way in.  That put me at the largest and best sale first, the senior center sale.

We took a wrong turn on the way there (totally my fault), so it had been open about 15 minutes when we got there.  That was enough for there to already be folks heading out with wonderful treasures.  I was still able to find several items for myself, so all was well. 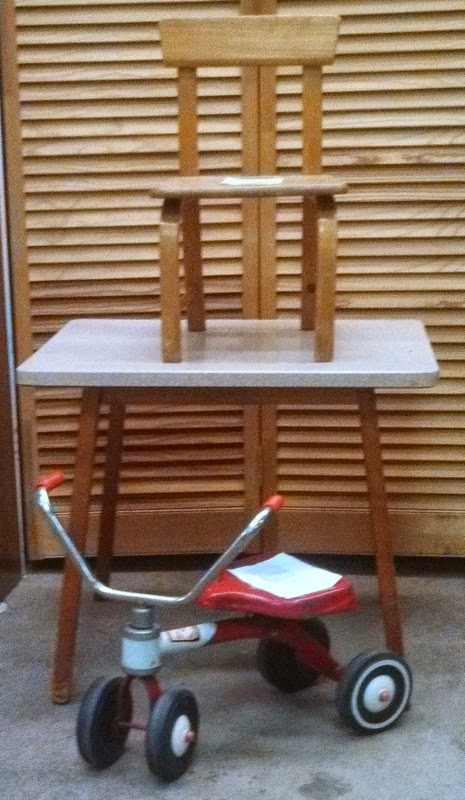 The riding toy came from this first sale.  There's a story about the table too, but I'll get to it in a sec. 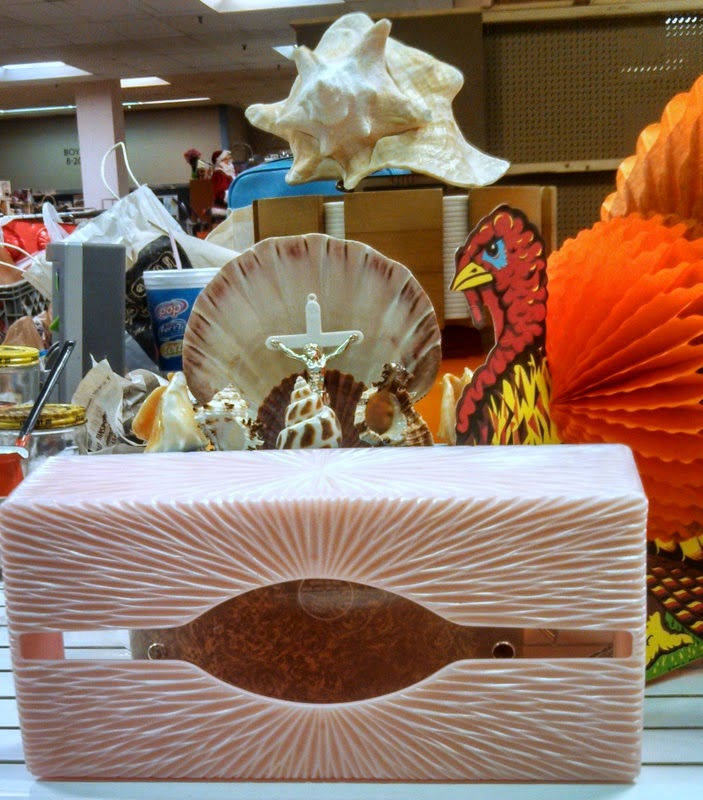 The Kleenex cover actually has a bottom and is designed to hang on the wall.  I think the design is really cool.  The honeycomb turkey is a Beistle, which is now patiently waiting for November.   I just can't resist kitschy Crucifix arrangements, like this shell scene!  The big conch shell is sitting on a vintage poker set. 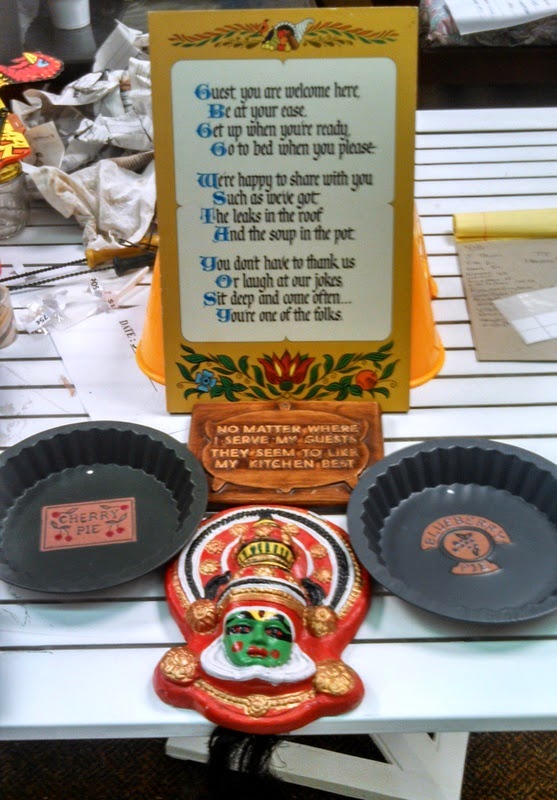 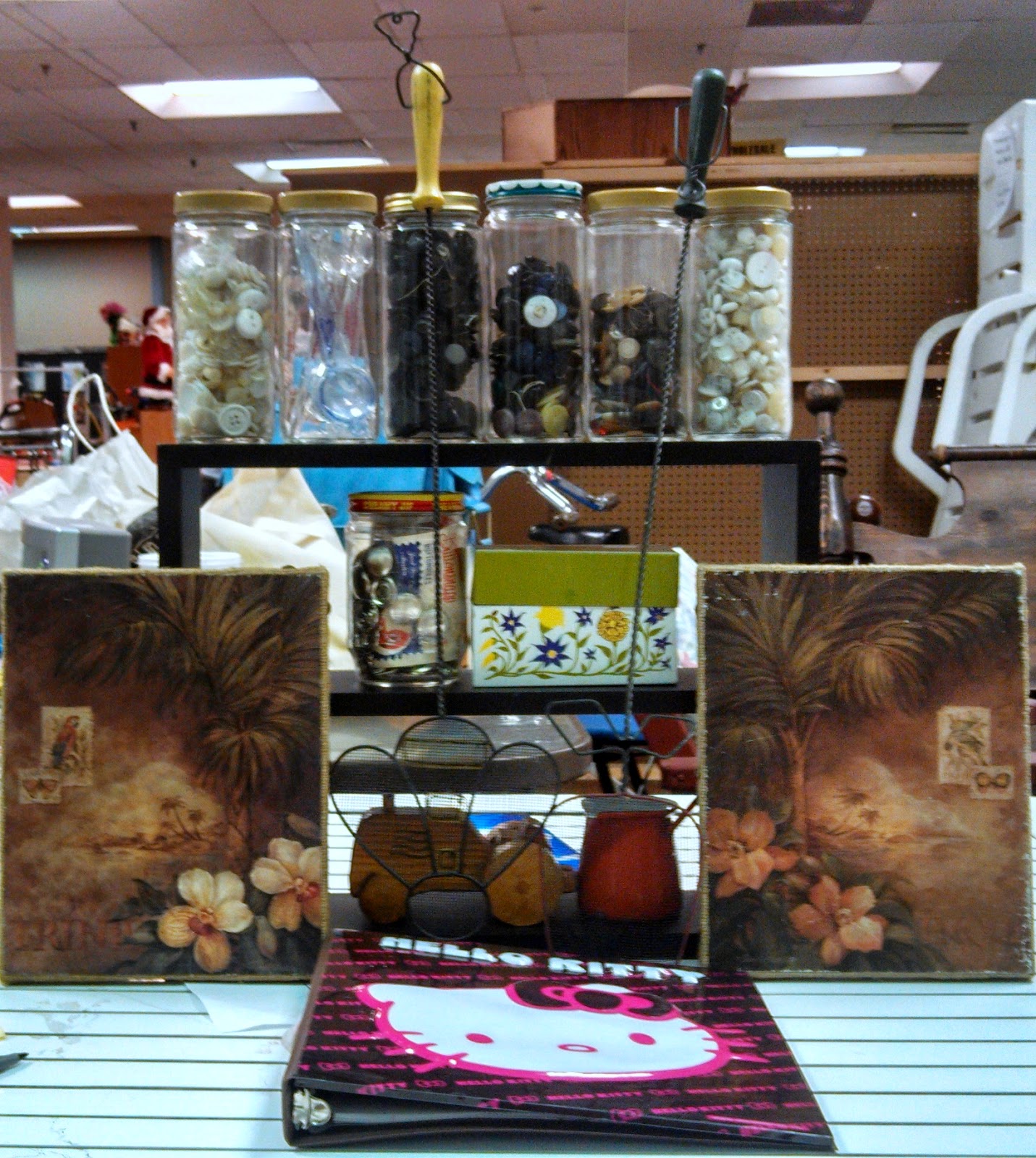 Oodles of buttons!  The jars are pretty big and were only 50 cents each!  I'll be splitting them up into smaller jars to sell.  A woman and I were kind of competing to see who could clear the table with the buttons.  She got distracted by jars of beads, so I cleaned up on the buttons.  I made it up to her by pointing out some beads that she missed.  I got the black shelf everything is sitting on at the sale too.  Always on the hunt for display stuff.  The fly swatter looking things in front of the shelf are kind of cool.  The woman checking me out tried to convince me that they were antique beaters for small area rugs, but they're nowhere near sturdy enough for that, plus they're pretty obviously modern pieces.  One them even has a fake patch sewn on it!

There's another bag of things from this sale that I am somehow missing.  I wanted to show you the brass incense burner that they were trying to tell me was an antique pillow warmer!

Well, maybe not quite that dramatic, but really? You're going to act like that to a customer?

Sadly, one of the other check out women told me that this is the last year for the sale.  I'll miss it.

Then we head off to the super awesome church sale.  I bought some of my largest items here.


And then I also got some fun smalls.

This vintage metal tea set for children is way cool.  All the pieces are there!  I paid a bit more for it than I typically would, but I fell in love with it. 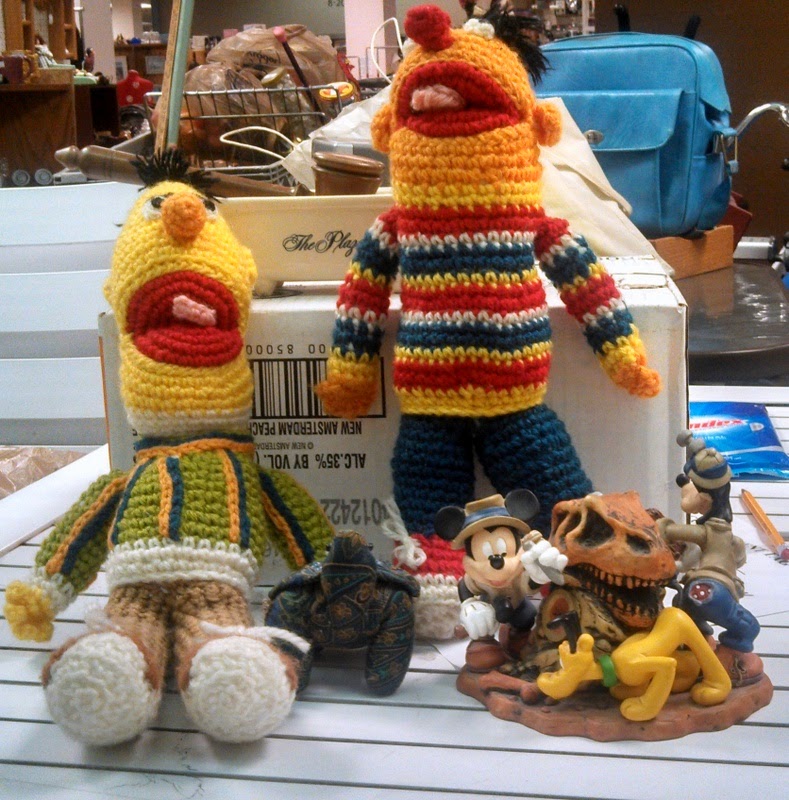 Bert and Ernie are hand-crocheted.  Bert was priced 50 cents and Ernie was priced a dollar.  I was teasing the woman checking me out about the "Bert discrimination." I told her that he was going to get a complex, being treated like that.  Without missing a beat, she looked at me and said (totally serious):  "I can always charge you two dollars each for them!"  The she winked.  I love it when the sale workers get me.  That little Disney statue sold as soon as I put it out on Sunday.  Mickey is always good to me, I tell you.

Heading closer to home, we hit the veterans sale, which was nothing special this year, to my great surprise.  We bought nothing but baked goods.  And, oh, what baked goods they were!  Someone had pressed peanut butter cookie dough into mini muffin tins and the result was chewy, crunchy little bites of peanut buttery awesomeness that were soooooooo good!

The last church sale is where I found the vintage kid's table and chair. I was surprised it was still there at nearly 11!  That may have been because it wasn't priced!  We asked about it and were told it was five bucks, so I really had no choice but to buy it.

I also bought a few smalls there. The bizarre thing on the right is a homemade Kachina mask that I think is way cool.  It came from the other church sale.  Everything in this pic cost me less than 2 dollars.  I felt like I had gone to Arkansas for a moment!  (That's a joke for Shara!)

I also hit a couple of individual sales before calling it a day.  I totally racked up at one, where I got a ton of cool stuff.  Again, I was surprised to see this much good stuff left after 11. 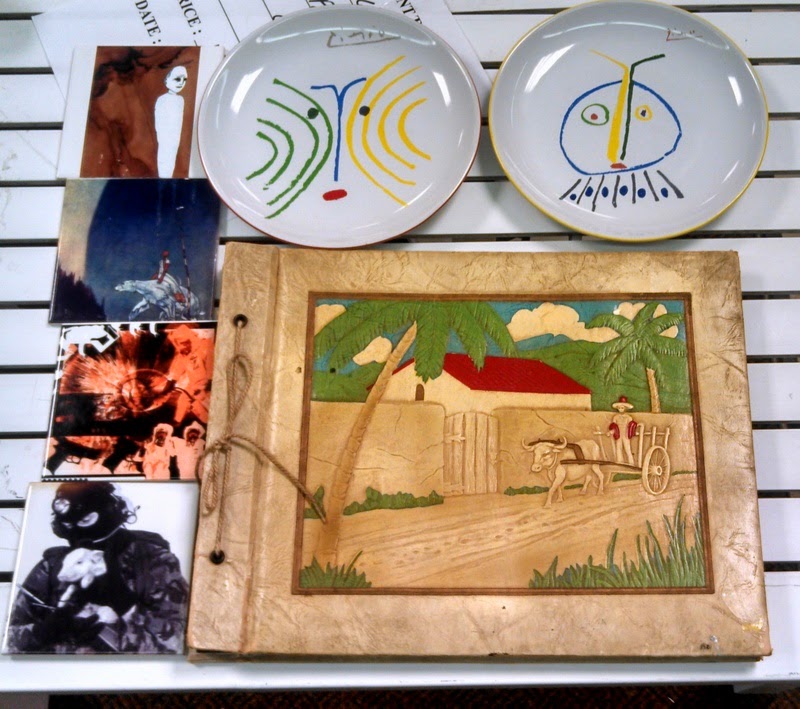 The plates in the second pic have Picasso images on them.  The vintage album has a leather cover.  And the four tiles all have these cool art designs on them.  I also got a vintage GE toaster there.

Another sale was put on by this vintage collector who is divesting himself of stuff.  He's had three sales so far this year.  I only got two things there, but they make such a fun pair. 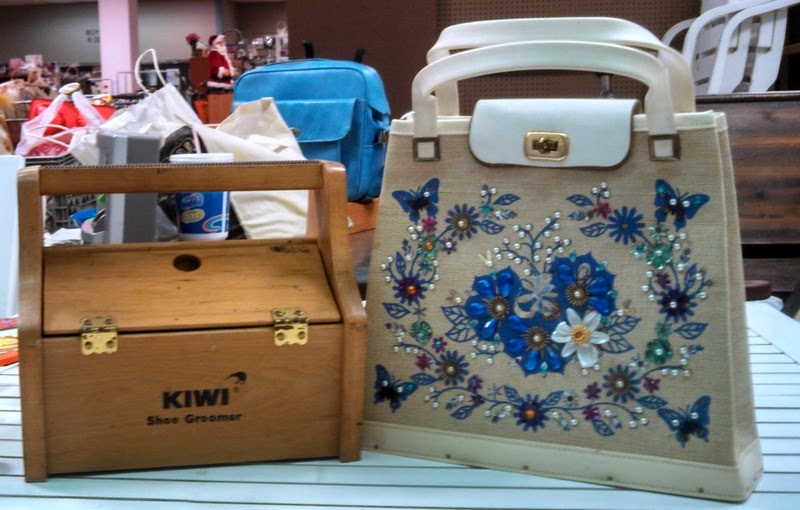 I carried them both out of the sale and felt like I had a kicky purse in each hand.  The purse even has a wooden bottom, which ties it to the shoeshine box!  I like to think of that purse as something my great-grandmother Gladys would have carried.  I really did have a great grandmother named Gladys.  She was my grandfather's mother.  I don't know for sure that she had a purse like this, but I like to imagine that she did.

Finally, a purchase I could not pass up, for sure:

Yes, more big bugs.  These suckers are HUGE!  They are easily three times as large as the last ones I got.  Like I was gonna leave them behind?

When I was working at the booth on Sunday, a little boy about two-ish took a look at the ant and called it a "spider."  I asked him if he liked it and he shook his head and said "Noooooooooo!"  So I said, "It is kind of scary looking, isn't it?"  And he nodded really big and said "YEEEEEES!"  Then he started crying for his mom to buy him some Legos from the booth next to mine.  Kids.

And what a haul! I have to learn to buy more stuff. I tend to hold back a lot because I'm afraid of being stuck with dud merch. I like your fill a box, pay, go to the car, back to the sale, repeat method.

I would say you did quite well despite your lament that all the sales were on the same time on the same day! You conquered!

everyone thinks I get so much stuff cheap, but I always think I have paid a lot. I guess I am happy to be able to thrift in Arkansas!

That second hamper is most likely a Redmon or a Hawkeye - was there a tag on the bottom?

My gosh Eddie, that is a TON of great stuff! Way to go! I love that little table and chair set.

Wow, Eddie! You got a ton of great stuff! I definitely have haul envy over your stuff. Thanks for sharing pictures!