This is the view out our front door. 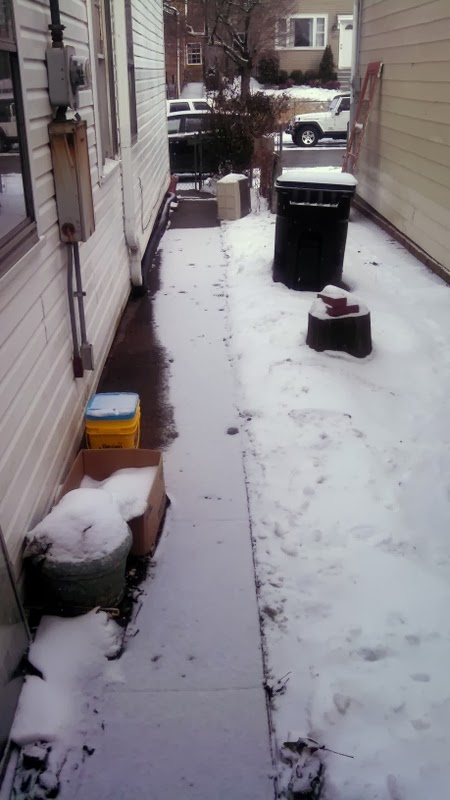 This is the view out the back door. 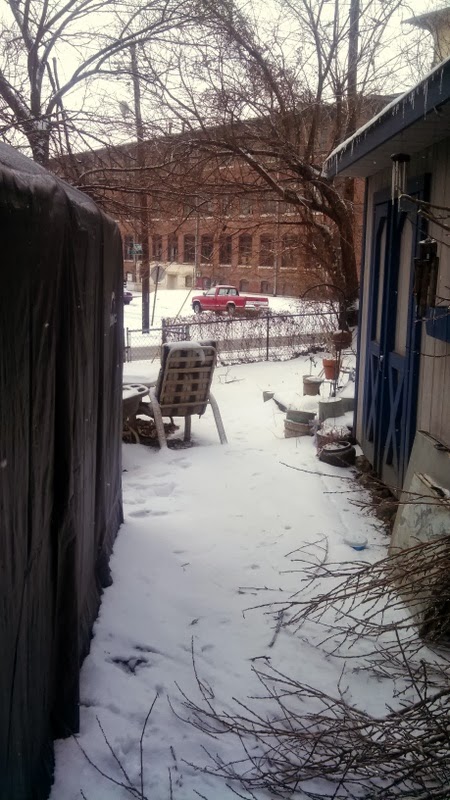 I'm not totally sure I understand this.  When exactly did we move to Michigan?

Part of the neighbor's tree fell off under the weight of the ice.  It fell in our backyard.  You can see part of it in the pic above.  Thankfully, it missed the sheds and the house.  It's kind of funny how tree bits look so much larger on the ground than they do when they are still on the tree. 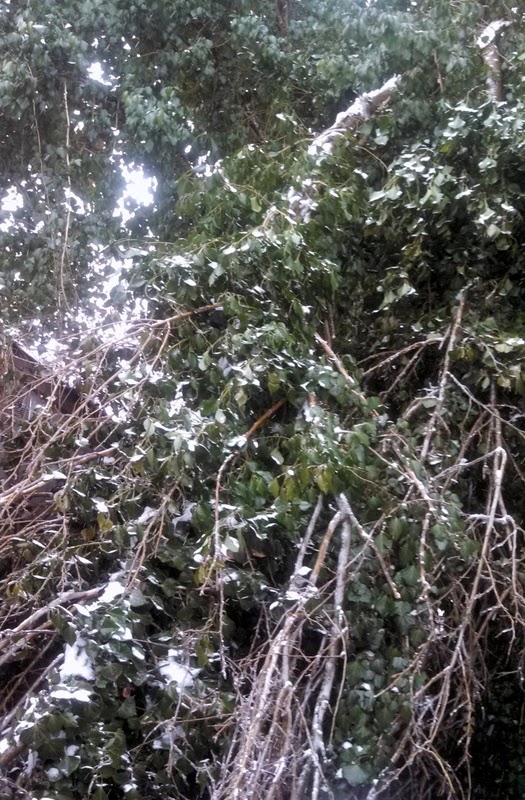 Practically everything around is still covered in ice.  It would be pretty if we didn't have to get out in it every day.  I can deal with it as long as the temps stay in the double digits.  It might not be what I desire to do or prefer to do, but I can deal with it.  I'm still limiting my ventures outside to those things that have to be done.   No fun side journeys these days.

I was supposed to be off this week due to budget cuts, but we saved so much money over the last two weeks with weather-related cancellations that now I'm supposed to be working.  Supposed to be.  But not today.  I'm going to the booths instead.  I hope that the weather cooperates the rest of the week and I can work.  I need it.

I actually saw  someone using the phone the other day!  I thought about getting a pic, but there was really no way to discreetly do it.  It would have made a great conclusion to the whole phone saga.  You'll just have to imagine it for yourselves.  Eddi-torial Comments:  Where the oddball, throw-away joke never really ends.

After the concert last week, the venue sent us an email asking for our feedback.  I replied with a glowing email. (Gee!  Imagine that!) I got a reply shortly thereafter thanking me for my email.  The email also shared that the unanimous opinion of all the venue staff was that Rodney and Emmylou were he "easiest" performers to work with.  "No backstage egos at all."

Emmylou has long had a reputation as being very gracious and genuine.  She is extremely well-regarded among her peers.  Of course, it's one thing to be regarded by your peers and quite another to be praised by all the backstage folks who make the shoe possible!  She's quite a lady!

The car got towed away Friday night.  They're going to fix it instead of totaling it, which is a relief.  What remains to be seen is what happens to our insurance.

Want to see something cute?

She's a flash drive!  Keith got her for me for Xmas!  I'd been waiting to use her until I had some junking related files I needed to back-up.  She's my official junking drive.   I love her!  He told me that sometimes the perfect gifts are pretty obvious.

One of the best features is the packaging.  Or rather, the artwork on the packaging.  It's all done in that classic, awesome Dick Giordano style that was the model for so much DC merchandising for years.  There are even temporary tattoos.

Did some junking Friday and Saturday.  No sales happening, so I hit the shops instead.  I'll share finds tomorrow.  I will share these vintage-style Valentines they have at Barnes and Noble right now.  I saw them while I was making my rounds.  They're like six or eight dollars a box or something outrageous like that, given that there are only 8 to a package.  I'll wait until next week and see if they go on clearance.  I thought maybe a few folks might like them! 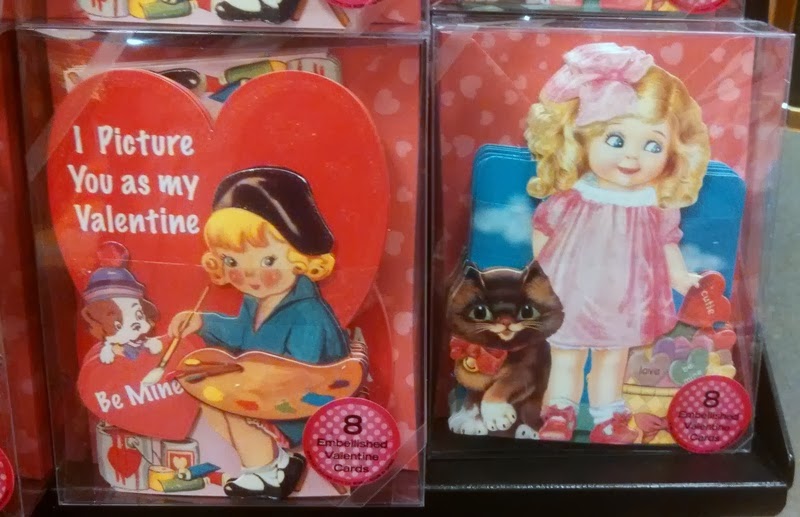 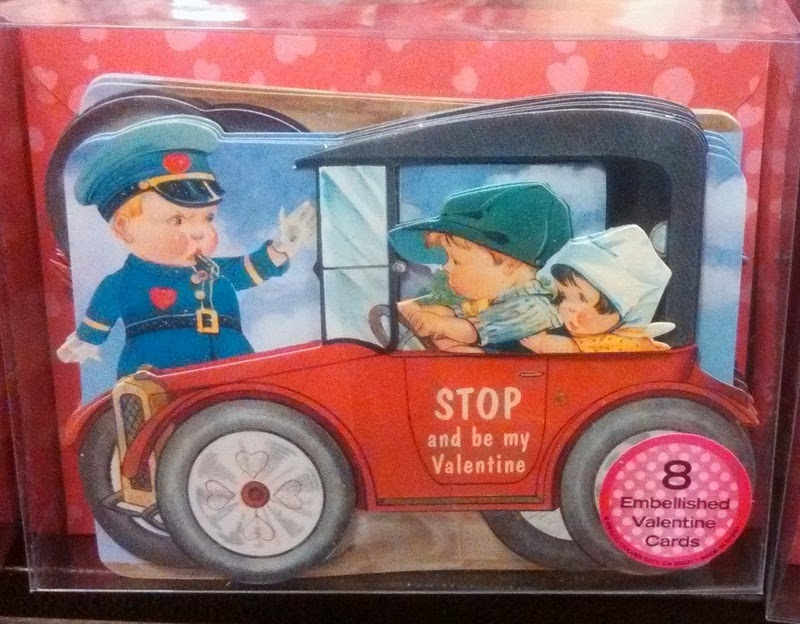 Why was I junking at Barnes and Noble?  Some of you may know why by now.  If you don't, I'll tell you later.  (It's kind of a sad tale.)  There is a hint in the paragraph before these last pics.

My what a random Monday Rambles!  Speaking of Valentines, "Your Vintage Valentine of the Day" starts today!  Limited engagement!  Four days only!  That's because Valentines Day is Friday (and because I only have four vintage Valentines to share).  Look for a special Valentines post on Friday!

I see online that B&N has these great $2.00 sales, but I have never been able to find them in my store. Well, I did find it one time and I got a couple of games, but I've never found it since.

We still have snow and crap here too. More coming tonight. It's going to be in the 50's this weekend which will hopefully bring the people out in droves to the flea market. Cabin fever!

When I order tickets to a play or concert, there is a Comment section on the order form. I always comment how excited we are or why we are going. When we went to see The Blue man Group for The Bean's birthday, I mentioned that it was for his birthday. The ended up working him into the opening part of the show. When we went to see the Broadway version of The Wizard of Oz, I commented that it was for my Mom and how excited she was and they sent us a handful of free food and drink vouchers with our tickets. Considering a pack of M&M's was $3.00, it was a nice bonus. So, always fill out those surveys and comments!

I think half the country believes they have been moved to Michigan LOL! You found some great stuff. Glad you got out to do a little shopping! Love the valentine bit.

I don't know how I caught a cold in Minnesota but I have felt like cr*p since we got back. Hopefully tomorrow will be a better day. I don't have time to be sick!

Wonder Woman...I like her! Do you have ME TV? They play reruns of WW...I just saw one last night!

Don't get me started on the weather! My friends on TN are expecting snow mid-week. Hello...it's February! It's expected here in Iowa, but down south this late? Crazy!