The weekend junking started Friday night while we were running errands.  Keith asked if I wanted to stop at Barnes and Noble to check on the clearance stuff.  I realized earlier in the week that I had not done the BN winter clearance this year, which is absolutely not like me.  Between the weather and being sick and all, I just kind of forgot.  Ack! 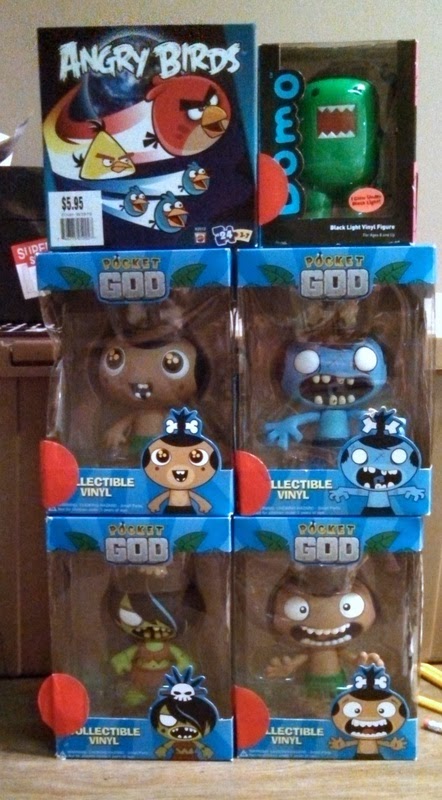 I got a Domo and some Pocket Gods!  I also got some coffee table books.  Better than missing it entirely, but I'm still kicking myself for slipping up.  I'll be extra diligent come summer clearance time!


There really weren't any sales to speak of on Saturday, so I stuck to the stores.  The first place we went was an antique mall near the house that is closing.  I figured that some of the vendors would be starting to mark stuff down.  It's not one of my favorite places to go.  I had a bad experience there a few years ago over a backpack I was carrying.  You can ask me politely to check my bag when I enter the place.  Don't ever come up to me and say "If you want to stay in this tore, I'm going to have to take that bag!"  And certainly don't storm up to me and yell it in my face!  Saturday was only the second time I had been in there since it happened, and that was a couple of years ago.

Antique malls in general are hit or miss places for me.  I love to look, browse and learn, but there's no way I'm paying those prices, even for something for me, and especially not to try and resell!   A large part of this mall is taken up by a dude with "Interiors" after his name.  You know when you see the words "Interiors" or "Decor" that things are going to be high!  I do like looking at his stuff, but it's a completely different world than the one I live in.

A lot of the dealers had already moved out, and only about half of the ones that were left were doing markdowns.  Most were still in the 25-50% off range, which works for me sometimes and doesn't work at others.  I'm going to try back in a couple of weeks, when it's closer to the actual closing date. 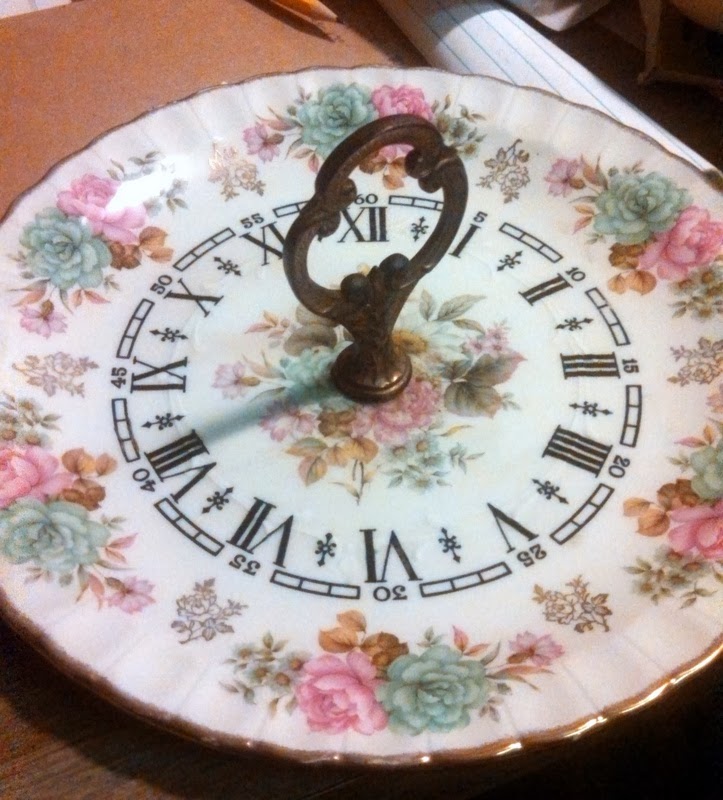 I got this dish really cheaply, because it was filthy!  It cleaned up really well without too much effort.  I love the clock motif! 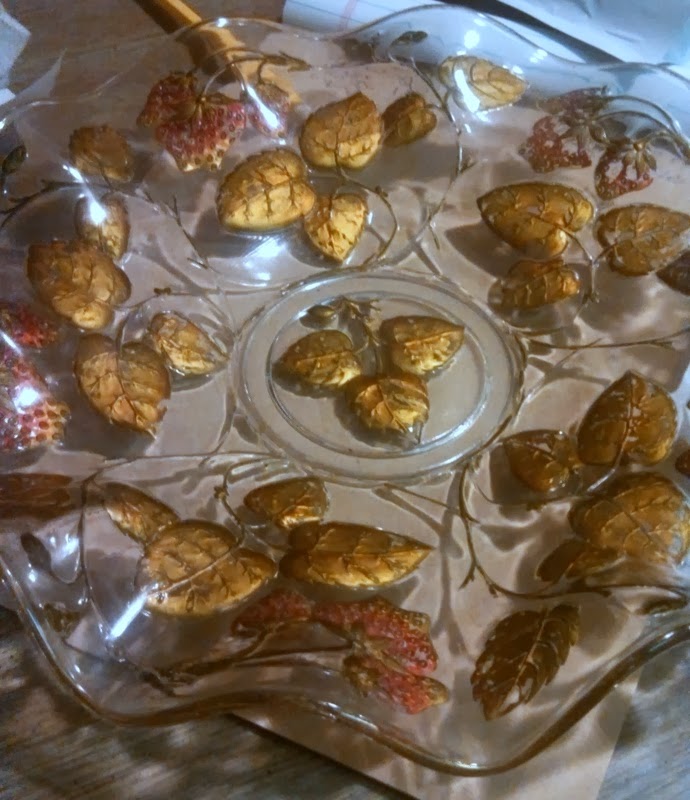 I also got the dirty dish discount on this really pretty piece.  I like the gold leaves.  I also fell in love with this vintage red square dance glass.  The caption says:  "Swing her high. Swing her low." 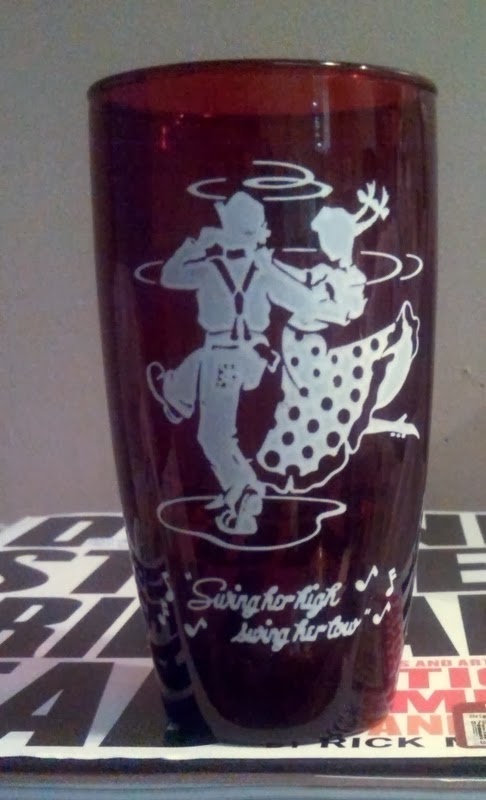 I did find some comic books, mostly over-priced (typical of antique dealers), but this pair fell in my range after the discount the vendor was offering. 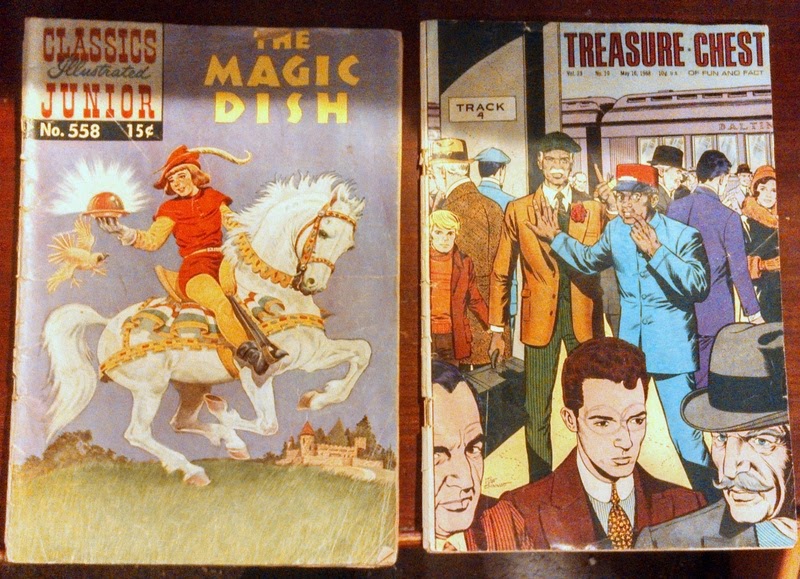 They're keepers.  I love me some Treasure Chest comics, which were given to parochial school students in the 50's and 60's.  The older ones have a lot of religious content, which I love.  I snap these up whenever I find them.  I have tons of Classics Illustrated comics, but not so many of the Classics Illustrated Juniors.  I'm always on the look out for those as well.

So I didn't!  See what I got after the jump. 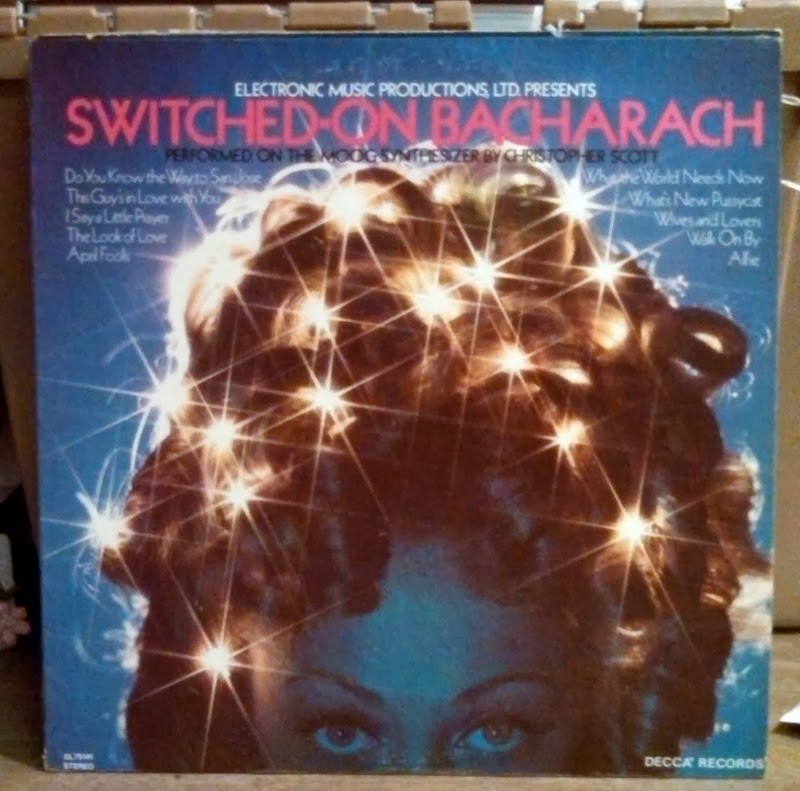 
I figured that I'd be charged for the most expensive one and the rest would be free, so I very carefully tried to choose only $2 records and not $5 ones.  It almost worked, except that those Linda Ronstadt discs I grabbed out of foolish devotion were all five buck LP's!  My per record price is still less than 50 cents, but fanaticism has its costs, you know?

We went to eat at the Asian buffet, and I saw a sign that the thrift store in the mall was having a 50% off sale.  This is the store where I found the blocks, so they weren't due for another visit from me for another 3-4 months.  But, 50% 0ff?  Man, I am so there!

I have lived in Louisville since 1987.  I have visited this thrift on and off a couple of times a year for most of that time.  I do not think that I have spent in total on all those visits what I spent there on Saturday!  Wow!

Here are a few of the things I got: 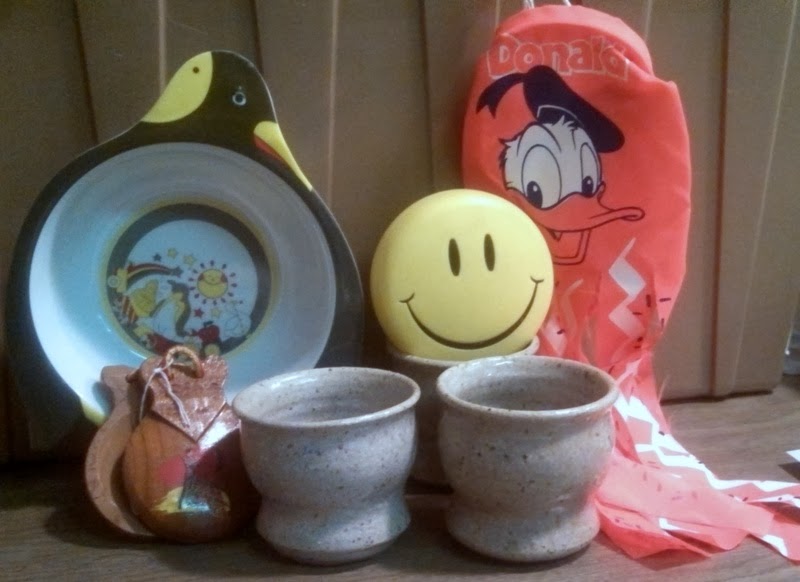 The smiley face is a hockey puck!  The Donald Duck streamer thing is actually a really poppy bright orange.  I think it's probably late 70's vintage.  Not that old, but really cool, nonetheless. 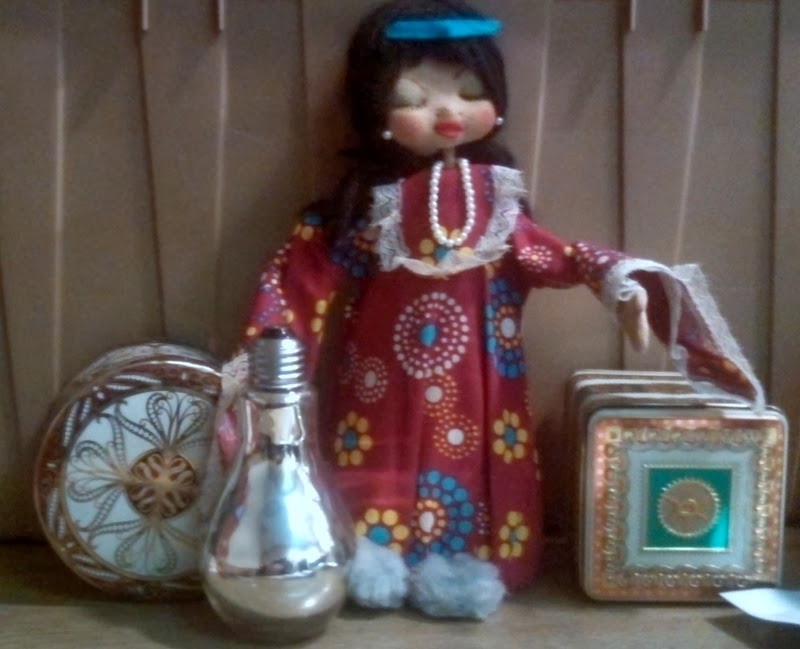 The light bulb is a cologne decanter.  The two tins are vintage and just lovely.  The square tin has the nicest jewel tones.  The hippie doll?  Well, she's just awesome!  Her arms wave up and down. 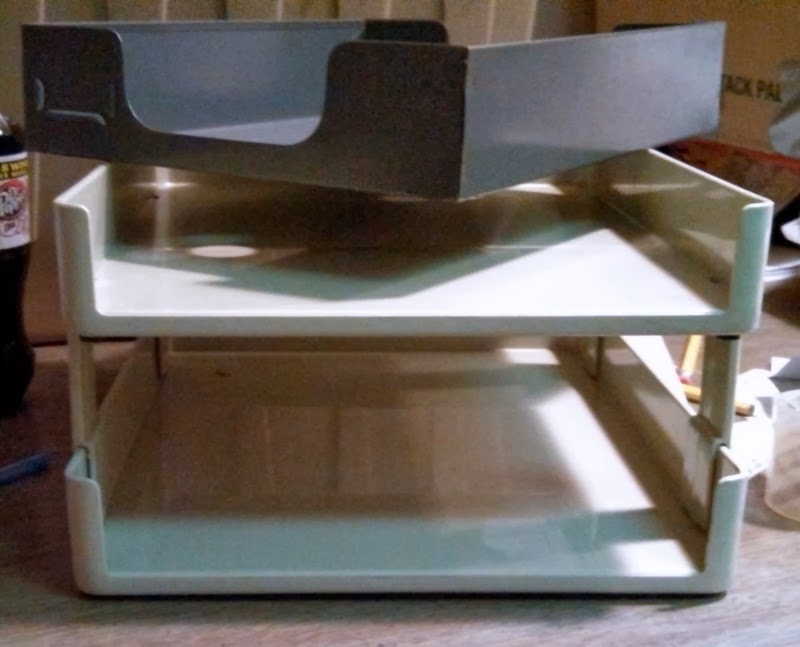 I bought a bunch of these desk trays for letters and files.  There's a two-tier wooden set already at the second booth.  They had a couple of the wooden ones that had not been assembled yet into tiers.  I passed the hardware on to a vendor who scraps and am selling the wood trays individually.

I also found a piece of Tubby Toast for Keith!


I hadn't been to the Goodwill downtown since the first of the year, due to the weather.  I got the shock of my life when I walked in the door!  Reasonable prices have returned!  They'd been having some mega price creep towards the end of last year, but almost everything I picked up on Saturday was one dollar or fifty cents.  I got three bags full of stuff for less than fifteen dollars!  That hasn't happened in a while.

It was Star Wars toy day at Goodwill.  I found a light saber, a space ship and a Death Star play set. 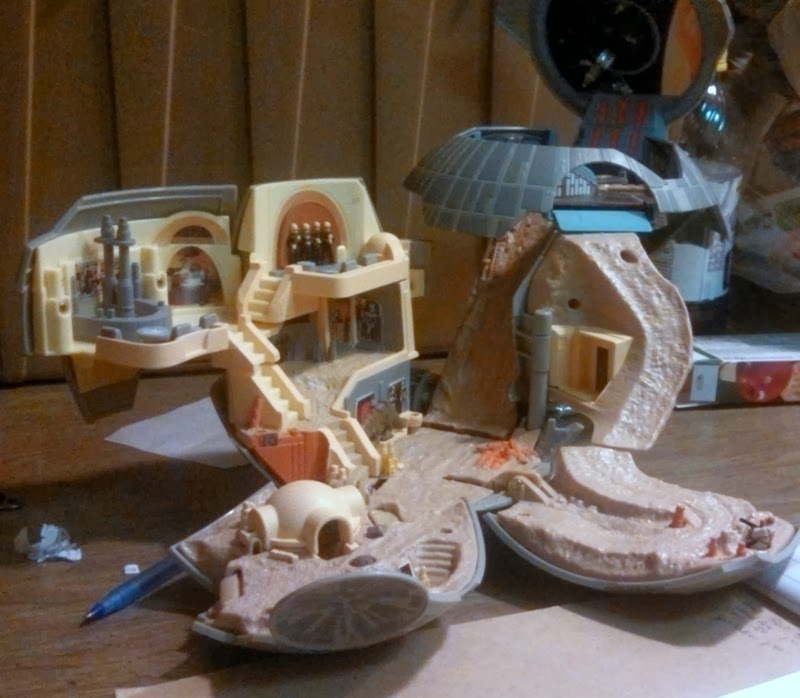 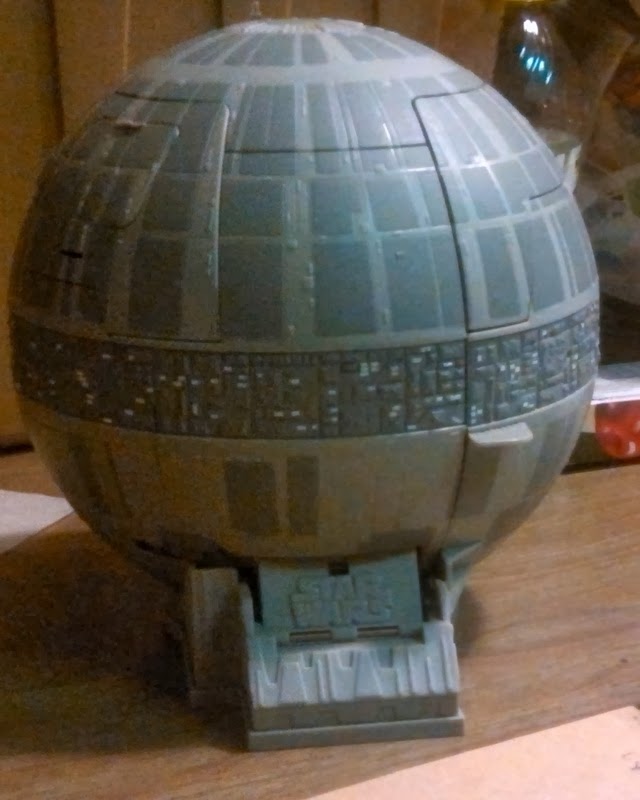 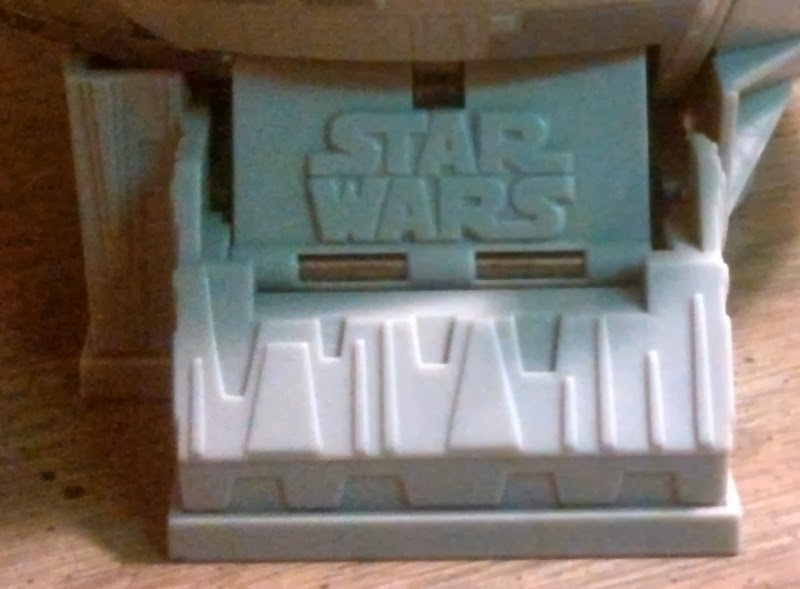 I found these three books about the saints for children.  I tore up the bookshelves looking for the other volumes, but this was all there was.  I already have my own complete set, so they go to the booth.

Interestingly enough, I also found a copy of one of my college text books.  I've actually read this one through a couple of times.  The cover has fallen off my copy, so I bought this one to replace it. 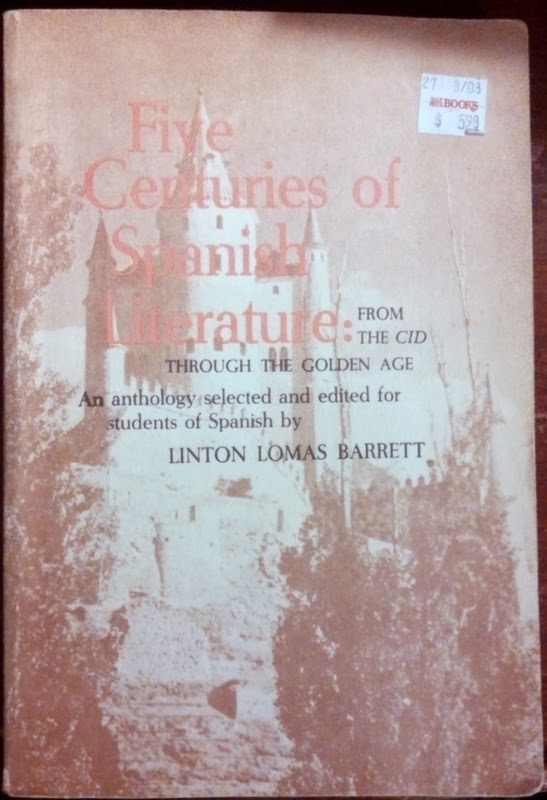 
One last thrift stop on Saturday--this time to a sister store of the one near me that closed.  I was happy to learn they'll be reopening the closed shop, but further east.  I'm afraid that means the prices will go up. 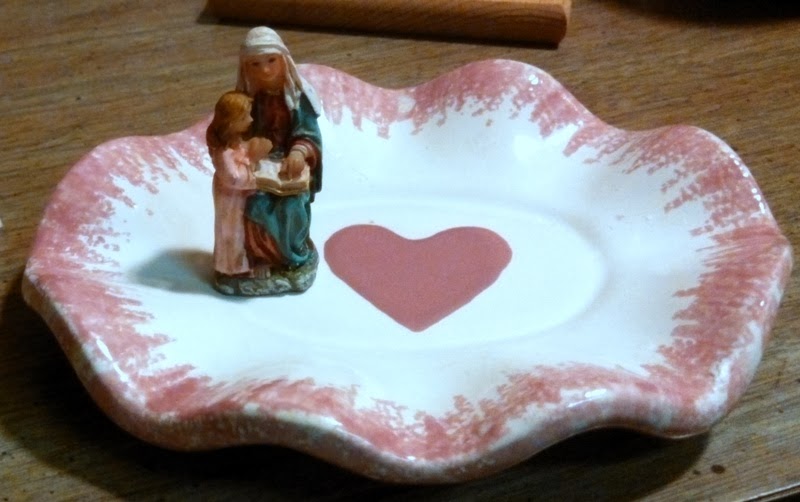 I love this tiny St Anne figure.  I have one myself, along with several other tiny saints.  The stoneware dish reminds me of Bybee pottery in look and feel, but it isn't marked. 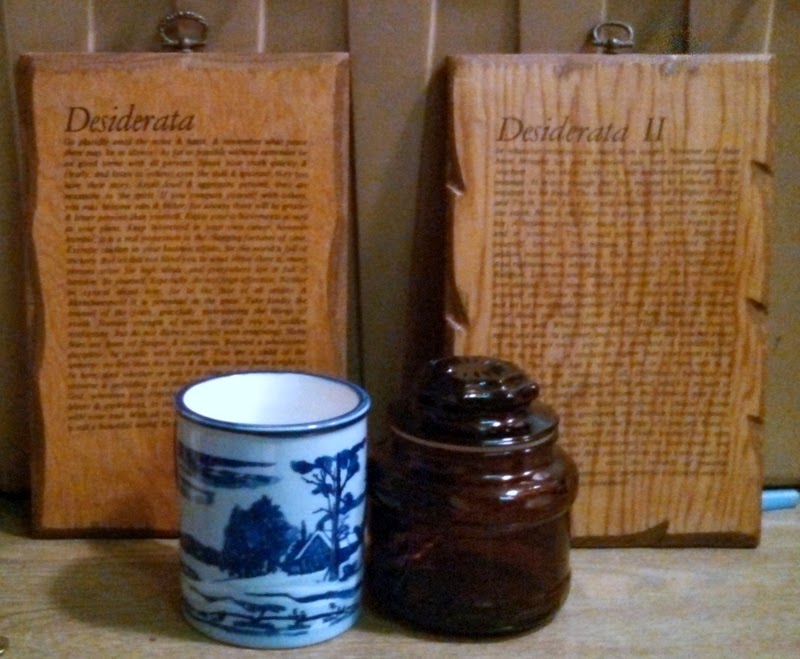 I sell a lot of those little dark amber jars, so I get them when I see them.  I thought the blue cup with the farm scene was kind of sweet, plus it was half price!

Sunday was half off day at the thrift downstairs from my booth.  I was going to work the booth anyway, so I decided to head on down and check it out.  They've run a couple of half-off days during the cold weather to try and bring customers in. 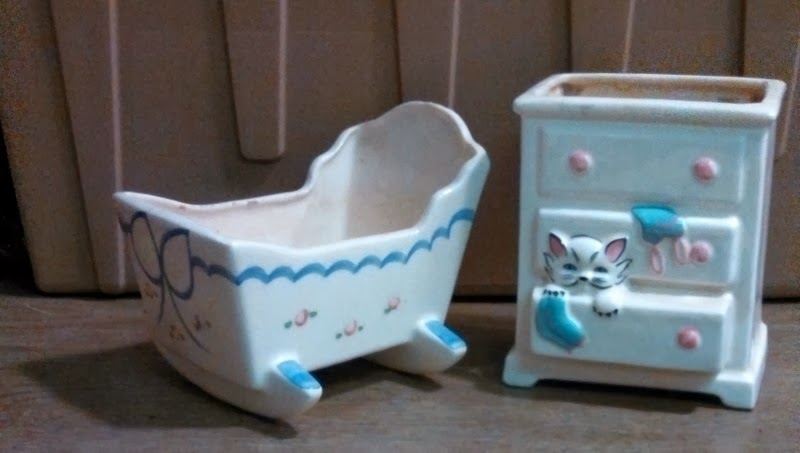 A couple of cute vintage planters.  The one with the cat reminds me of Chiquito. 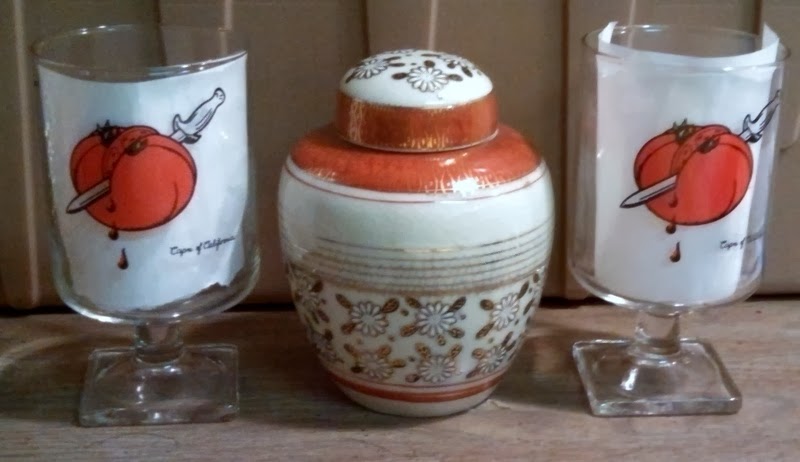 The art on those glasses intrigues me.  A tomato sliced by a sword?  Seriously? 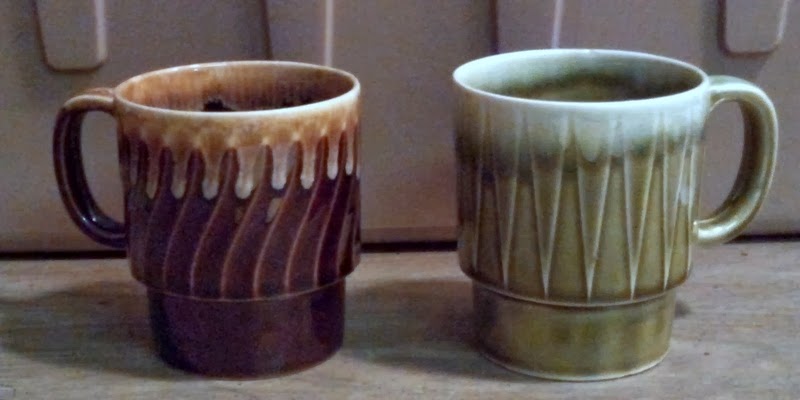 I would love to have a set of mismatched, but complimentary, coffee cups! 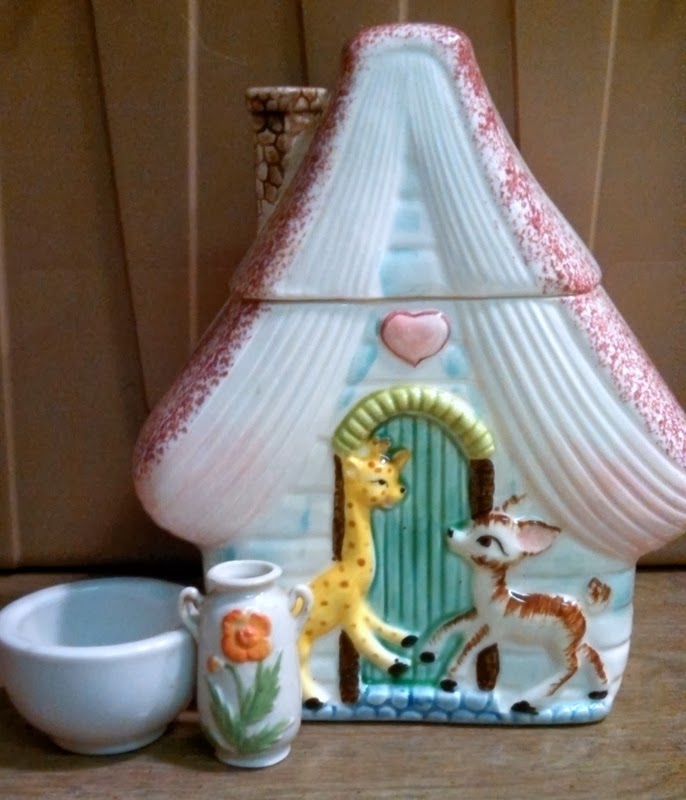 Vintage mortar bowl (no pestle), mini-vintage vase, cute vintage cookie jar.  I think I'm turning into Shara!  Do the giraffe and the deer live together in that house?  I bet they have to hide out in their little home in the woods away from the prying eyes of those who would disapprove of their relationship! 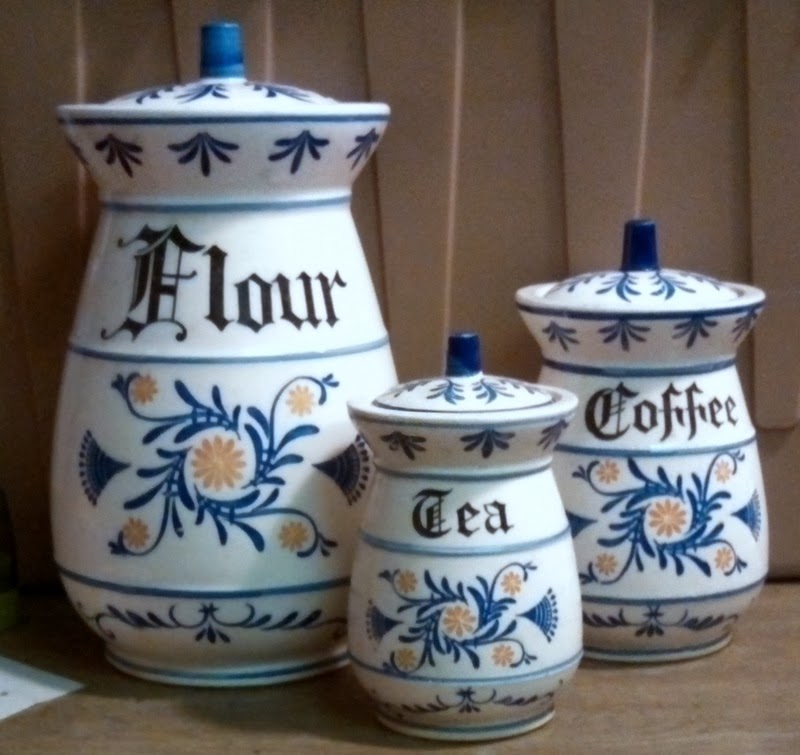 Vintage canister set.  I'd been eying this one for a while. 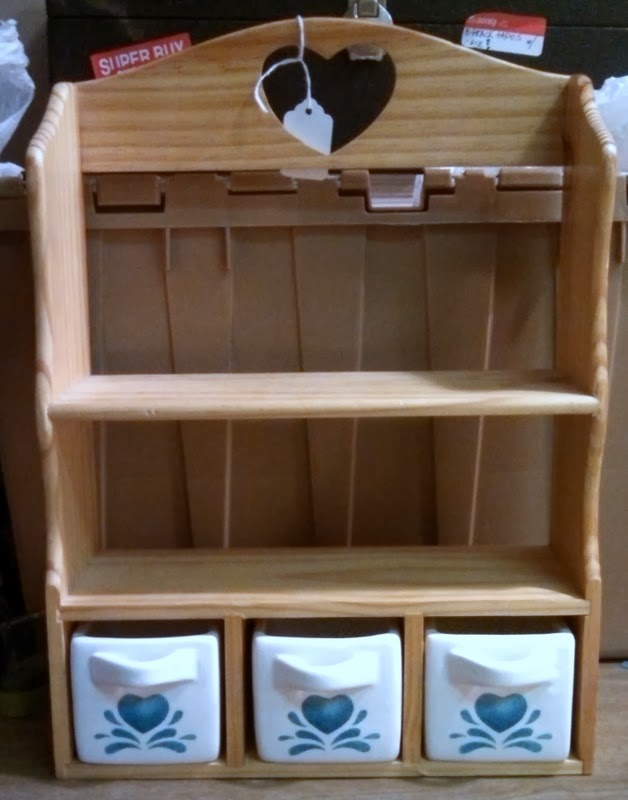 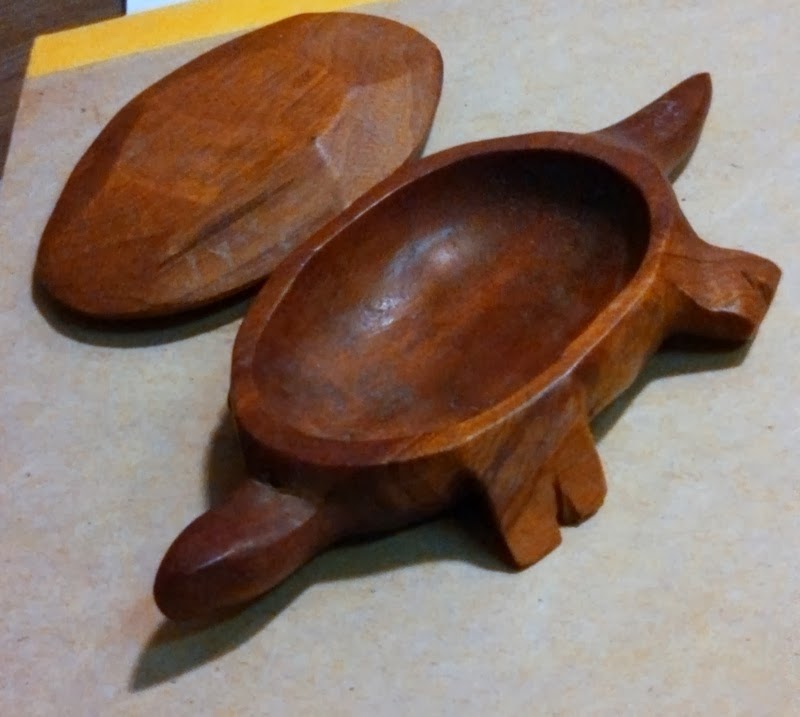 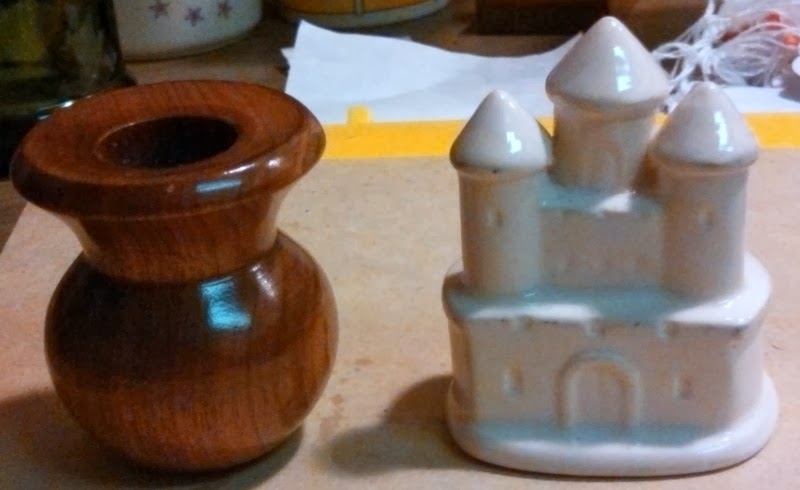 More cute little stuff.  Definitely had a Shara day!  (Not that there's anything wrong with that!) 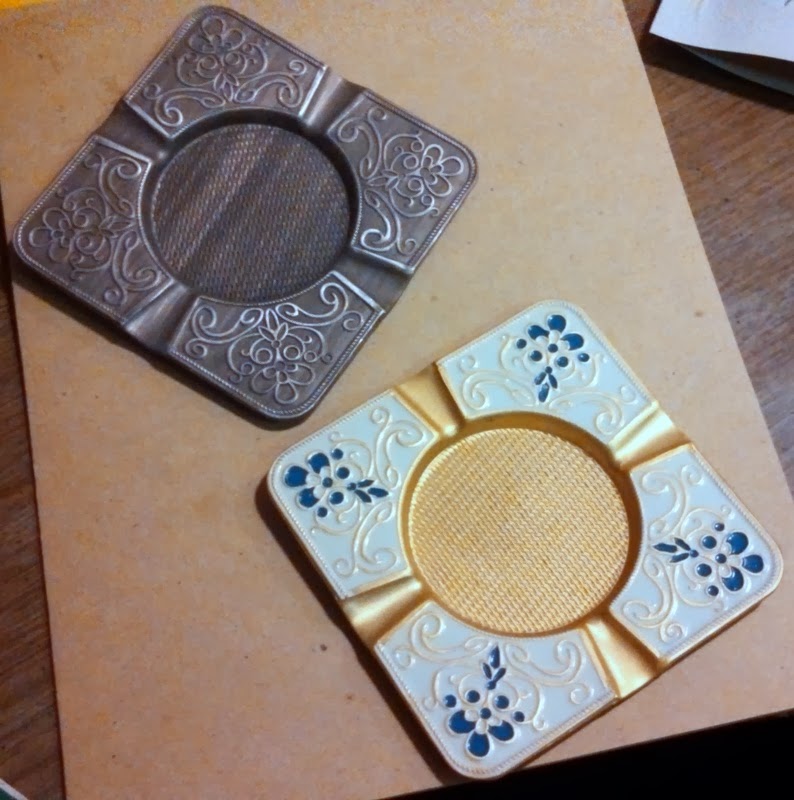 I thought these metal ashtrays/coasters are really pretty.  They're European in origin.

I spent most of yesterday getting all this stuff sorted out and priced and such.  Half of it is at the one booth, and the rest is going to the other come Saturday!

The little tin with the puppies & kittens is one that I had as a little girl! I absolutely love it! Any chance you are selling it online?

"It was Star Wars toy day at Goodwill."
The Force was with you Eddie. Cool Death Star playset! And I lol'd when I saw the Bay City Rollers album. Remember they wore those cropped pants? That was before it was in fashion.

Eddie you had a great day! Love that clock plate the best! It is really pretty and fun. Love that you had a 'Shara' day!! Thanks for sharing your fabulous finds at TTF!
hugs,
Linda