Deja Vu All Over Again

Wanna know what I did last night?

I bet you're thinking I did something fun, like watch an old movie or paint my toenails cherry red or something.  You might even be thinking of something practical, like vacuuming the bedroom (which really needs it), or pricing vintage doodads, or reading comics.  (Yes, reading comics is practical!  How else am I going to get that stack down to a manageable level?)

But you're not thinking this: 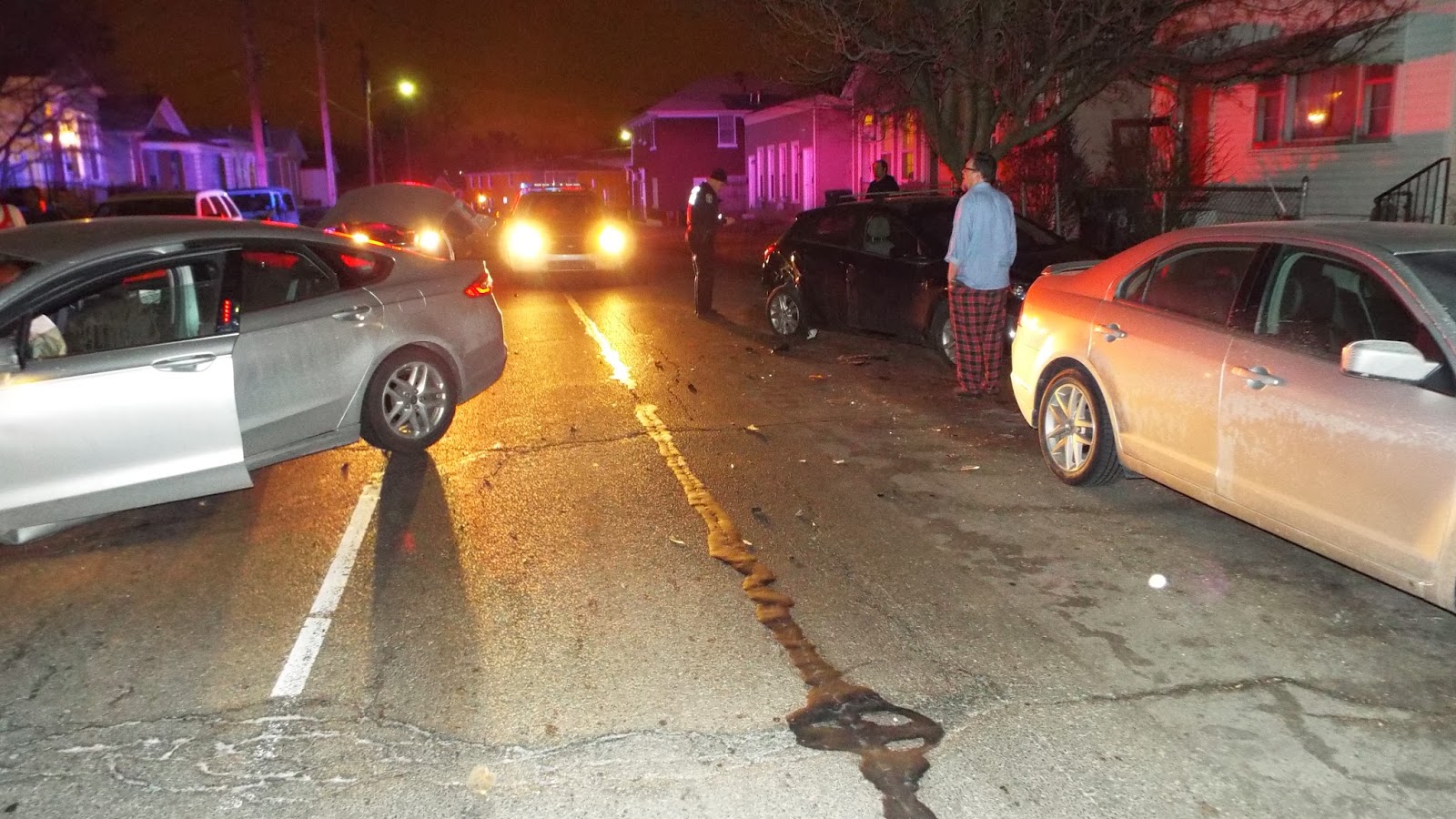 I'm the styling, but befuddled, dude in the plaid sleeping pants on the right.  The one standing by the wrecked car!  The wrecked car that was just purchased to replaced the last one that got wrecked in front of the goddamn house, which is where this one got wrecked too!

From here on out, you're liable to see some frank language.  If that bothers you, I get it, but I am pretty pissed right now.  Here's a substitute you can mentally insert when I get a little off-color:

I mean, what the fuck?   Seriously?  Are we not living right or something?  As far as I know, neither one of us has ever done anything to anyone else.  So why the bloody hell does this keep happening?

Okay, let me back up a bit and fill in some blanks.  I left a couple of loose blog-ends at the end of last year.  Actually, it was Shara who reminded me in a comment a little while ago that I had not spoken of the resolution to the whole car ordeal.  (You might want to refresh your memory before reading on.)

The hardest part was getting the vehicles towed away.  They sat in front of our house (half on, half off the street) for weeks!  It was early December before they were both gone.  We were kind of worried that the neighbors would start calling the city and complaining.

Things were mostly settled on the Hyundai by Thanksgiving.  In fact, on Black Friday, Keith was looking at new cars.  The truck took a little longer, but everything came out okay there too.  I'm keeping my eye out for another little furniture hauling junker for a few hundred bucks or so.

The new car did really fill the bill pretty nicely.  The wrecked car was a Touring, a model Hyundai discontinued in favor of the GT last year.  They're pretty similar in features, but the GT has a deeper well for cargo in the back.  That means it holds a little more and it's easier to load large awkward items.

When we were moving stuff into my new booth, I took two sets of shelves over that we had previously hauled in the Touring, where they barely fit and only went in with much huffing, puffing, and drama.  They just popped right in the GT, with plenty of room to spare!  In fact, I took everything to the new location in just two loads, instead of the 3-4 I had been planning on.  It was the closest thing to an ideal junking car we've ever had.

The car in the middle of the road is the one that hit us.  It bounced off us and then smacked the neighbor's truck across the street.  Witnesses said the driver fled the scene on foot.  Turns out the car was a rental, but the driver will probably report it stolen, so we may be shit out of luck again.  They never found the driver from November.

I'm not even sure what to do now.  We're pretty sure to lose our insurance over this, even though neither claim was our fault.  The house insurance is with the same company, so who knows about it?

The rational part of my head is trying to insert thoughts about freak accidents and statistical anomalies, but the rest of me is trying to imagine how we're going to run two careers and a junking business without a vehicle.  And even if we can get a new one, where the hell are we going to park it?

F--- is right! I can't believe it happened AGAIN, Eddie. Sounds like your street needs some police patrols. Bitch to your city... Good luck!

Oh Eddie, that just beyond SUCKS! I can't believe you can't even park your car in front of your house without fear of it getting hit. Beyond ridiculous! I'm so sorry. :( Bad enough to have to deal with that hassle once, but twice is just unbelievable!

Dang. Dang. Dang. That is pretty rotten that your car is not safe out front..hope somehow there is a good side to this experience. I'd be cursing up a storm too.

That's just too freaky to have happened again.

Curse away! I can't even believe this has happened again! Dealing with the insurance companies...not fun! Car shopping...not fun! I'm just sick for you.

Well, FRTZNGL! How did I miss this post? FRTZNGL! Is the car totaled or can it be fixed at all? Good golly, you JUST got the FRTZNGL thing. Holy FRTZNGL. I am so sorry. What a FRTZNGL'ing mess.