This edition of Monday Rambles by Eddie-torial Comments is being brought to you by: 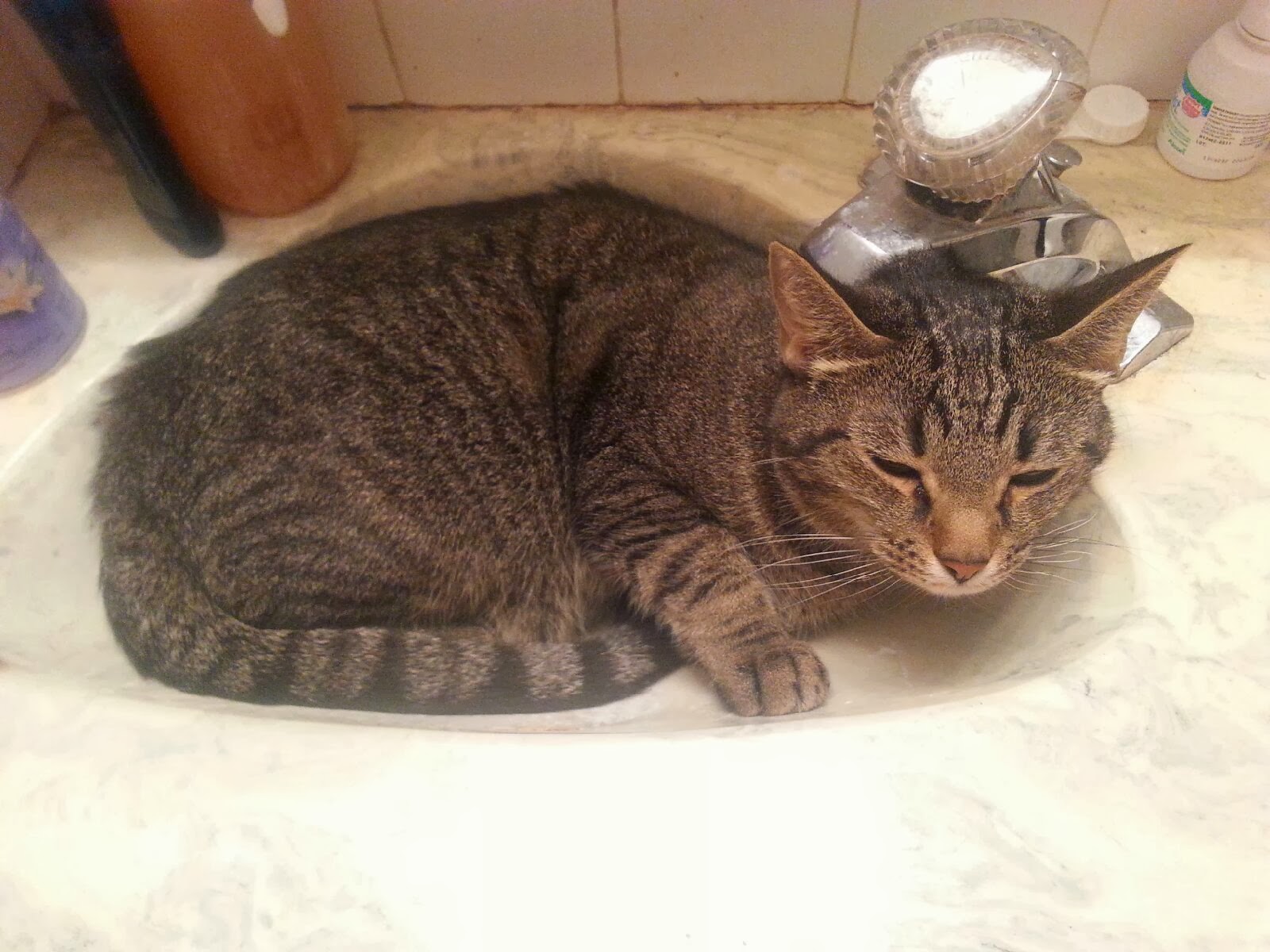 A kitty in a sink!

Chiquito is one of those water play cats.  You know, the ones who defy the stereotype that cats hate water.  He has always been nuts about water, running or still.  His water dish is always surrounded by little splashes that he has smacked and slapped and scooped out of the bowl.  He'll sit there for several minutes, until he's tossed all the water out of the bowl.  Then when you pick the bowl up and take it to the sink for a refill, he comes running and tries to grab the bowl while you're filling it.  It's insane.

One of the funniest things I've ever seen our cats do happened one day when he was doing his splash play routine at the water dish.  Bennie was sitting there waiting for him to finish, so she could get a drink.  Finally, she reached out her paw and yanked the bowl away from him.  I just cracked up!

He's been the only one in the house that was happy about the sub-freezing temperatures, because we had to keep the faucets running a bit to keep the pipes from freezing.  He sat by the bathroom sink for hours, playing and splashing and carrying on.  Then, he would crawl in bed with us with cold, soaking wet paws.

Now that it's warm and the water is not running, he spends time beside the sink, occasionally staring at it, and at least once, sleeping in it.  That's his sleepy face in the pic.  We have a wild household.

Speaking of warmer weather, it has been glorious here!  The ice and snow are gone!  We did have a nasty thunderstorm last week, but I just kept telling myself:  "It's not snow.  It's not snow."  I know a lot of other folks are still dealing with the winter weather and I do feel for you guys, but it's nice to see the sidewalks again!

Friday was really windy, but Saturday was the best day we have had in ages!  It was the kind of day when there should have been dozens of yard sales everywhere.  Instead, there were none!  It was very sad.  We went to my uncle's to pick up some stuff to take to his booth, and his wife said that she was just "living for yard sale season."  Me too!  Me too!

I got "observed" by my boss at work last week.  I guess it went okay.  I wasn't happy with the way it came out, but the written review was pretty good.  I have to do it again this week.

I didn't have much of a chance to thrift last week.  Went to a couple, but didn't find anything.  I did get some Valentines clearance at 90-ish% off the other day.  Just a tad, since I don't really do a big booth Valentines thing.  People don't tend to think Peddlers Malls when they're looking for Valentines gifts.  I'll put them up for next year.  (While I was with my uncle, he gave me some Halloween clearance stuff that I left in his van ages ago.)

The sensational Sue at Vintage Rescue Squad has asked the most awesome question:  If you could have one junking super-power, what would it be?  I'm almost disappointed that I never thought of this!  I mean, is there a more perfect combination of comic books and junking?  (Other than shopping for old comics at flea markets?)  You can see my answer in the comments and leave your own!

I can't see the picture, but it maybe just me.

One of our cats will only drink out of the bathtub faucet. Luckily, for him, it has a slow steady drip so he always has fresh water. He will drink from his bowl, but he prefers the shower. He has many quirks that make us question his mental well being. :D We love him!

I am so not a cat person (please don't hold it against me) but that cat does look pretty contented lying in his sink!

I see him now!

I'm surprised he hasn't tried turning on that faucet!