Day Dreams: What I Wish Would Happen to Days of Our Lives

Any soap fan worth his salt has a wish list of fantasies for his show.  Here to wrap up my look at Days of Our Lives, is mine.

Meaty story for Maggie and Victor.  They are only like the best pair in town, but they just support everyone else's plots these days.  What fun it would be to see them stirring the pot on their own again.  Maggie's illness could come back.  Or Victor could be ill.  What if Maggie expanded her restaurant to a chain and all-of-a-sudden had less time for Victor?  What if some business rival of Victor's set his sights on Maggie as well?  The possibilities are out there.  Some clever writer just needs to find them.

More action for Lucas.  I promise not to turn this into just demands for more stories for under-utilized characters, but Lucas has stood in Sami's shadow for years and his mother's for even longer!  What will it take to get the dude a righteous story of his own, particularly with a new love interest.  Wouldn't it be wild if Daniel, whom Lucas cannot stand, has a sister, whom Lucas falls hard for?

Marlena!  Just one more, I promise.  Look, the lady is the linchpin of the town, and she's offscreen for weeks at a time.  This simply will not do.  Play on her career or something!  What if Marlena started counseling a severely disturbed individual who turned out to be responsible for many unsolved murders over the years?  What if she fell for him?

Beef up the Hortons!  Bring back Mike and Jeremy.  Recast both, if needed.  And Nathan.  What about Bill?  Wouldn't that put a new spin in Kate's orbit?  I've always felt that he was her one, true love. Nick needs his mother and grandmother right now, even a short-term return would be welcome on that front.  This is Salem's first family we're talking about, after all.  Do Doug and Julie even live in Salem any more?

And the Bradys!  Shawn and Belle, anyone?  Seriously, Jason Cook and Martha Madison are available and they were the best S/B combo, in my opinion.  Bringing in Kim's daughter Teresa was a nice start.  A cousin from Ireland?  Bring back Frankie as a law partner for Justin, and then spin a Jennifer-Daniel-Frankie triangle out of it.  Hell, throw Julie Pinson's Billie into the mix and make it a quadrangle.  Wasn't Daniel originally supposed to be a love interest for Billie?  Yeah, I know he dated her daughter, but this is a soap, people.  He's also been with her mother.

It's time for Abe to move on.  Imagine a nice, high-profile casting as a new romance for the old police commander.  Wouldn't be nice to see him slowly coming out of his shell and learning to love again?  Not to mention, Theo learning to cope with the situation?  James Reynolds could so do that story justice.  It's been so good to see him in a larger police role lately.  Now it's time for a real story.

More romance.  The overall problem with every soap these days is a lack of romance.  There seems to be plenty of time for corporate intrigue, crime waves, and strange adventures, but romance?  The last romantic montage on Days was weeks ago.  The only really happy couple on the show right now is Will and Sonny.  Jennifer and Daniel went right from Chloe drama to JJ drama, with no break to be happy.  We never see Maggie and Victor in a scene together.  John and Marlena are circling the drain.  Hell, Hope is trying to carry on a marriage with someone who isn't even on the damn show any more!  I'd love to see one whole show where everyone went on a date and nothing awful happened to anyone.

How about a location shoot?  I know the budget is tight, but I'm not talking Antigua, here.  How about a shoot at a beach in LA instead?  Use a local spot and call it somewhere else.  I don't care.  I'd just love to see the show go out of doors for a change.  Of course, a big trip would not be unwelcome... 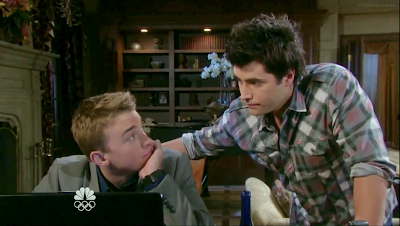 A big, splashy wedding for Will and Sonny.  A boy can dream, can't he?  C'mon!  Two legacy characters in a sensitive, realistic gay romance?  I want tuxes and wedding marches!  Pronto!

Sami and Rafe reuniting.  Every fan has their favorite pairings.  This is one of mine.  Rafe is not my preferred mate for Sami.  That would be Lucas, but even I can see that there is too much water under the bridge for this one, even if both characters do sizzle together more than any of the other possible Sami pairings.  If I can't have my real preference, I'll settle for Rafe.  I hate Rafe as a character, but I love him with Sami.  Alone he's dull.  Together, they click.  He brings out a side of Sami that I like--lighter, less intense.  She becomes someone who can learn from her mistakes, even if she'll repeat them again in time.  He softens her edges just enough for her to actually exist in polite society, and I like that.

Clearing up the Bo Story.  If there is one item on this list I would love to see happen above all others, it would be this one.  Peter Reckell has been gone for months.  Hope has gone from pretending that he is in the other room to having one way phone conversations.  Kill him off.  Kidnap him.  Recast him.  I don't care.  Just do something.  This is ridiculous!

I could probably go on some more, but that's enough fan entitlement for this soap nerd.  What do you all wish would happen?

Email ThisBlogThis!Share to TwitterShare to FacebookShare to Pinterest
Labels: Days of Our Lives, Eddie likes a good soap, soaps