I'm definitely feeling better right now.  No nausea. No tin foil.  Just lots and lots of bricks.  Thanks to the 4ht, I got a four day weekend, which was nice.  It gave me a chance to rest up, yet still do things.  It rained most of the weekend, which meant no yard sales, which meant  really good sales at the Peddler's Mall for the first time this month.

I took a good load in on Wednesday and straightened up quite a bit.  I discovered that, despite slow June sales, I had some pretty bare shelves.  Four totes later, most of that was taken care of.  Now, of course, I have new bare spots to fill.  We're having our fourth anniversary fling this coming Saturday, so I'll be taking more stuff in to get ready for that.  I think I'm bringing in mainly larger items, but haven't decided for sure.  I'm not going to be in town for the shindig (more on that in a bit), but I have high hopes for some good sales.

We went to the big flea market on Saturday, as mentioned previously.  We started the day with a traditional family breakfast at my dad's favorite restaurant. 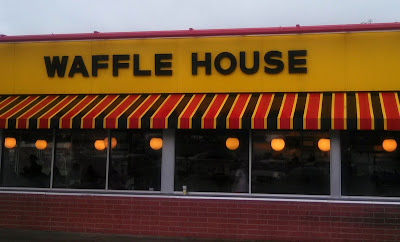 I was well-armed with my granny cart.  (I actually have three of them.  I'm really wanting one of the newer models that has a drink rack on the back.) 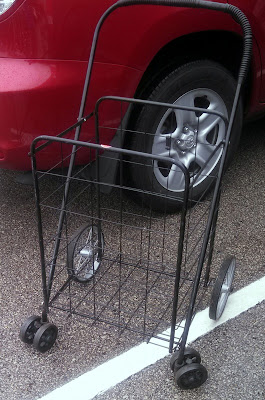 I wasn't looking to do any serious re-sale shopping.  I'm pretty well-stocked at the moment.  The main goal was to look at stuff, have some fun, and celebrate my mother's birthday.

As far as big flea markets go, this wasn't one of the better ones.  The variety that's typically there was lacking.

The Fiesta people were there. 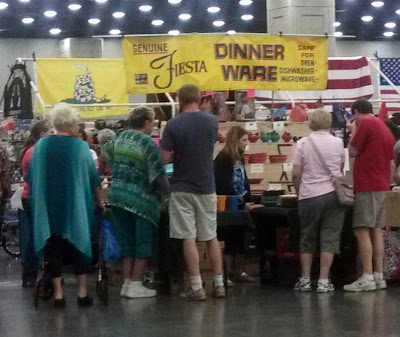 The T-shirt people were there. 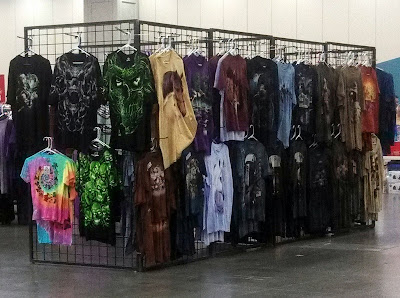 The banana box people were there. 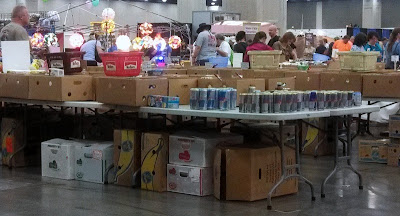 Also, the fashion belt people, the leather purse people, the dip mix people, the flavored coffee people, the "As Seen on TV" people, and the dollar jewelry people were all there.  In fact, dollar jewelry seemed to be the theme for the day.  It seemed like there was a vendor in every row with boxes of jewelry to sort through.  Some of it looked to be older, but I don't know jewelry and don't really have the patience to stand there and jostle with people rooting through boxes.  So, I passed.

What was missing were the secondhand dealers that are always there.  There were a few, but mainly book dealers.  There were some higher end antiquers there, but not the kind of folks who have a wide variety of stuff at good prices.  Normally, there are a lot of these "mom and pop" sellers there, right alongside the "pros."  I'm not sure what the deal was, but it was a little disappointing.  I'll be writing more about the big flea market and the way it's changed over the years later this week.

We still had fun, and I did spend a little money.  I bought a couple of games for resale and a nice pic of the 23rd Psalm for a dollar.  I got some comics and books for me, plus a couple to sell.  The Kentucky Proud kettle corn folks weren't there, which was a bummer.  I did get some snacks and some stuff for the house.  It was just a relaxing, no pressure, shopping for fun kind of day--just like I used to have with Mom.  Sometimes, it's nice not to be "working."

It was still pretty tiring, since the bricks came along too.  I took a several hour nap when we got home and spent Sunday lazing around and resting up.

One of the things I picked up was a flower arrangement for Mom's tombstone.  When we were there for the funeral, I noticed that the flowers at her grave were getting kind of ratty.  We're going to take a road trip this weekend to go and spruce it up a bit.  We're also going to hit a couple of flea markets and antique malls on the way.

I've found a couple of new niches on YouTube that have me tickled:  old Disney cartoon shorts and soap opera broadcasts from the fifties and sixties.  I caught an episode of Secret Storm from the late fifties that I totally got into.  Great, classic soap opera like they don't make any more.  I also found a classic As the World Turns featuring several of the performers who were still on the show when it was cancelled a couple of years ago.  It was pretty cool.

Of course, as a junker, I have a hard time watching vintage TV without being distracted by all the background set decor and props!  So many vintage goods!  So much that I could sell!  It's a sickness, I tell you!
Posted by EM at 7/08/2013 05:00:00 AM

I use a "granny cart" to do grocery shopping!

I call my cart a "Bag Lady Cart" - "Granny cart" is much nicer! Glad you had a nice day.