Days of Our Lives: What's Not Working

Nobody's perfect!  Even a show that's going well still has some weaknesses.  Here are the things that I would like to fix about the current run of Days of our Lives.

Hair, Make-up, and Wardrobe:  I wish that the look of the show were as strong as everything else is, more specifically the look of the characters.  Practically every woman on the show has had at least one (and usually more) really bad looks.  It's hard to make some of these women look bad, but they seem to have found a way to do it.  They put Sami in a topknot, for gosh sakes!  Jennifer's wardrobe bounces between totally frumpy and way too young all the time. It looks like she is either raiding her mother's closet or her daughter's. Jen and Kristen have both sported unwieldy, scene-stealing hairpieces that made them look like pumpkinheads.  They had a scene together in those awful do's and there wasn't enough room onscreen for both their heads!

It's even worse for the guys.  EJ pretty consistently looks sharp, but he's about the only one.  Sonny's hair often changes from one scene to the next.  It also seems like he only owns four shirts, and two of those are butt-ugly.  JJ only has one pair of jeans.  Daniel and Brady only have a couple of shirts between them.  I am so sick of Brady's purple shirt I could scream.  The men of Days are too hot to settle for mediocre wardrobing!  (We won't talk about Chad's current hairstlye.  Yeesh!)

Father Eric:  I would love to have been on that story planning meeting.  "Let's bring back a hot dude from the past who happens to be Sami's twin brother and Nicole's first love.  Lots of story potential there.  Just to mix things up, let's make him a priest, even though no one ever mentioned anything about seminary."  Really?  It doesn't really help matters much that Greg Vaughn's way of sounding "solemn and serious" is to deliver most of his lines in this gruff "I am Batman" voice.  Just not working.  I have to admit, though, that it is a valid excuse for him to wear the same thing every damn day. 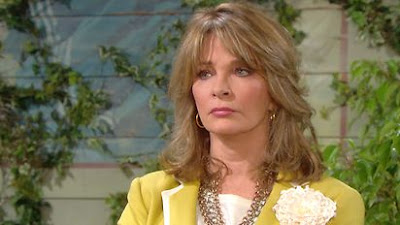 Marlena/John:  The only really major complaint I have with the writing is the way that John and Marlena have been handled, or mishandled as the case may be.  I can't buy John turning on Marlena the way he has and purposefully hurting her.  There was a time when they would have faced a problem like Kristen together, which would have made for a much more interesting story.  As it was, she is the one who exposed Kristen in the end.  Why couldn't they have slowly built to that?

The story wasn't helped by the fact that we barely saw Marlena through the whole thing.  She was a recurring character in a story that was ostensibly about her!  Worse yet, it's happening again as Kristen plots her revenge.  Days needs Marlena on several days a week, if not every day.  I get that she is expensive talent, but the way the show should be dealing with that is by getting their money's worth out of her.  Play the hell out of her!  Stop the sidelining.  Just imagine if she moved in and out of all the other stories as easily and frequently as the other characters do.  It would enrich the entire canvas.

The other thing that's not helping is Drake Hogestyn's acting.  Admittedly, he's never been a powerhouse, but he at least used to try.  In the last half of the Kristen story, he was barely phoning it in, whispering all his lines in a monotone.  He hasn't been on for a few weeks now, so it would be a good time for the show to cut their losses here.  Marlena doesn't need John to have a good story.

Dangling plots:  Will anyone ever find out what Gabi did to Melanie?  Maybe now that Camila Banus is leaving the show...but I'm not holding my breath.  I think the stuff with Nick, Will, and the baby has partially redeemed her, but only partially.  It's a plot point that just hangs out there and dangles.  At least it's not alone.  There's also Kate's shenanigans against Chloe.  Somehow, Chloe managed to come back to town for months, and only minimal mention was even made of that whole unpleasantness.  When was the last time any mention was made of the fact that Theo has autism?  So many good story opportunities with Abe as the widowed father of a special needs son and show basically passes them all up.  At least Caroline's Alzheimer's gets a little more play than that.  Finally, they had such a neat story going with Hope trying to be a single parent to Ciara while Bo is gone (another dangling plot in itself), but they've let it go. That turns it from a good story for Hope as she tries to deal with her daughter acting out--a completely character-driven action for a young girl--into a mere plot point designed to advance the Nick story.  It's always a shame when character-driven drama gets cast aside for plot-driven stories.

The bits we don't see:  The current writing team likes to cut in and out of scenes, often leaving elements unseen by the viewers.  We might leave a scene as a character is about to drop a bombshell, but revisit it moments after said bombshell is dropped.  The reactions get played out onscreen, but the actually bombshell dropping is not.  It took a bit to get used to, but I kind of like it.  They're putting a lot of trust in their viewers when they do something like this.  Sometimes, though, what doesn't get shown is kind of important and really would have made some good drama.  Sami leaves to go to her arraignment at the end of one episode, but the next one she is out on bail.  I would have love to have seen those scenes, given that she did just kill a man.  Sometimes a technique works.  Other times, it bites you in the butt.

Indiscriminate/Indeterminate Passage of Time:  It certainly exacerbates the hair/wardrobe problems when it takes a week or more for one day to pass, so we have to see the same terrible looks over and over and over.  I know soaps have always played fast and loose with time, but someone has at least got to pay attention to what they are doing.  It's been several weeks in real time since Rafe was put into a coma, but only a few days on the show.  Recently, however, characters started talking about the "long weeks" he's been in his coma.  They can't have it both ways.  In fact, Rafe's beating, Nick's kidnapping, Will's shooting, Gabi having the baby, Sami shooting Bernardi and being acquitted, and EJ's corporate takeover all occurred within a very short period of time, according to the storytelling.  That's a little much.  This is the one major weak spot in the writing.

Bo:  Everyone and their Aunt Tilly knows that Peter Reckell left the show last year (!), yet Hope is still having one way phone conversations with an inexplicably absentee spouse.  It's time to do something about this one.  The more they drag this out, the more contrived it gets.

Roman:  The man has not had a decent story since he was married to Kate and that was a decade ago!  Nowadays, all he does is wring his hands over Sami and moon over Marlena.  I get that Josh Taylor is not the strongest actor on the show, but some of the surely must stem from lack of material.  He's been a spy and a police officer, yet they cannot think of anything for him to do.  I think it's about time to cut their losses on this one.  Work him or cut him free.

Budget limits:  The root cause of many of these issues is the show's budget.  The network has clamped down hard on spending for Days over the past few years.  I get that.  They can only do so much with the dollars they have.  The problem is that the way they've been dealing with it only serves to make the problem much more obvious.  Maybe there's no other way to do it.  I'm not a soap exec, so I don't know.  I just can't help thinking that there has to be a more creative, less obvious, way to do it.

The past four or five years have been rough for soaps.  I'm grateful the show is still here to enjoy and that it is as good as it is right now.  I still can't help quibbling a little and wishing some things would get cleared up.  It's part of being a fan, right?

Email ThisBlogThis!Share to TwitterShare to FacebookShare to Pinterest
Labels: Days of Our Lives, Eddie likes a good soap, soaps