Last week was not a good one on most fronts.  I wore myself out so bad on our road trip and didn't have enough time to bounce back.  Damn chemo.  I started off with a deficit on Monday and it just got worse throughout the week.  By Tuesday, I was cranky.  By Wednesday, I was whining.  Toss in some intermittent diarrhea problems and I was not a pleasant person to be around.  I think I moved from dragging the bricks around to actually wearing clothes made out of the damn things.  I had no energy whatsoever.

To make matters worse, it was the week of a major shift at work, and that took a lot out of me as well.  I hadn't been working any nights since the end of May, and my two nights a week returned.  I was just not ready for any of it.  I still highly doubt that I actually accomplished anything for anyone last week.  Sigh!

We had an awful heat wave all week, which killed my good sales month on the vine.  All I needed on Sunday was one good day to make the rent.  I didn't get it.  Now, I'm sitting at the tail end of the month again, fretting the booth rent.

I did see something interesting:

That would be a city bus on a tow truck.  I'd never seen that before, even though I'm sure that other Louisville buses have broken down before.  The building across from where I work is the bus garage and I was stepping out to get a bite to eat when  I saw this one being towed in.

Wednesday, I went to the dermatologist.  I've got a mole on my back that we are watching.  They might end up removing it, but they want to give me a chance to bounce back from the chemo first.  In the meantime, we're gonna keep tabs on it.

Their office is in one of the few old houses left in downtown.  It was the childhood home of Louis Brandeis. The doctor's office purchased the building in the 80's, which is obvious from the way it was decorated.  This is the bathroom: 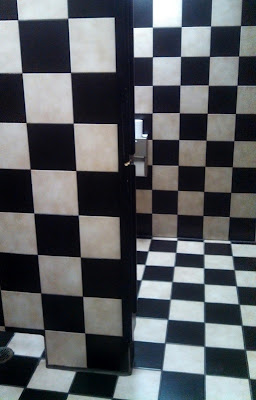 Let's take another look at that: 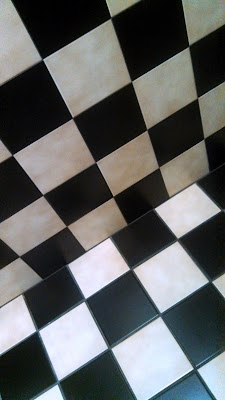 Yeesh!  Kinda gives you vertigo when you go to pee.

Day by Days:  Last week was really good on Days.  First off, we got Brady in the buff. 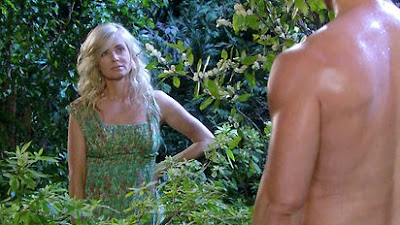 Then we got lots of Marlena scenes--with Will, with Sami, even with EJ.  Good stuff there.  We need Marlena every day.  Seriously.

I am consistently amazed by Eileen Davidson's ability to take Kristen from pitiable to psycho with just a couple of beats.  I love the way this story is going, as Brady is trying to reach out to her, but she is so wrapped up in her drive for revenge that she doesn't see it.  She's going to end up alone again, and it will be her own fault.

Adrienne knows she has the video!  Yay!  Can't wait to see what she will do.  Those were good scenes with Sami.  I still hate JJ, but he plays his mom like a fiddle and is so smooth about it.  Even young Sami wasn't that polished.  I hate that all of Ciara's problems seem to have gone away and now she's a model child again.  Everything is set up for this week to blow up, so I'll definitely be watching!

Tomorrow is the last chemo day.  I have the usual dread going in, but it's mixed with the anticipation of knowing this is almost freaking over!  I guess they'll be scheduling me for a scan soon.

Thanks to everyone for their kind wishes on the engagement.  I was really touched by all your enthusiasm.  It's kind of odd, since we've been together for so long, but I get kind of giggly and goofy grinny when I tell people about it.  I really wasn't trying to be sneaky by putting that little bit of news at the end of the road trip post.  I was just trying to report things in the order they happened.
Posted by EM at 7/22/2013 05:00:00 AM

Sorry you didn't have a very good week last week but you only have one more day Eddie, you can do it - tomorrow night at this time it will be all over! Yippee skippee!!!

That bathroom makes me want to turn up the collar of my polo shirt and wear a headband.

One more - you can do it! Just keep swimming, Eddie! (Do you know the story of Talia?

Sweet angel faced girl. You can do it for her, okay?

I'm enough of a traditionalist to suggest that marriage is somehow different, so it makes me happy.