There's this totally cool junking blog called Dig This Treasure, which is run by two friends named Erin and Sarah.  They share their exploits hunting for fun stuff to keep or re-sell with the kind of wit and bite that I totally get into.  You can tell that they enjoy what they do, but are not so wrapped up in everything that they can't laugh at some of the odder stuff they come across, even if it's each other.  It's become a daily must read for me.

A couple of weeks ago, they had an anniversary contest, where they gave away this awesome blow-up dog named "Beefy."  I normally don't enter things, because I never win when I do, but I thought he was pretty cool, so I did.  For once, I actually won! 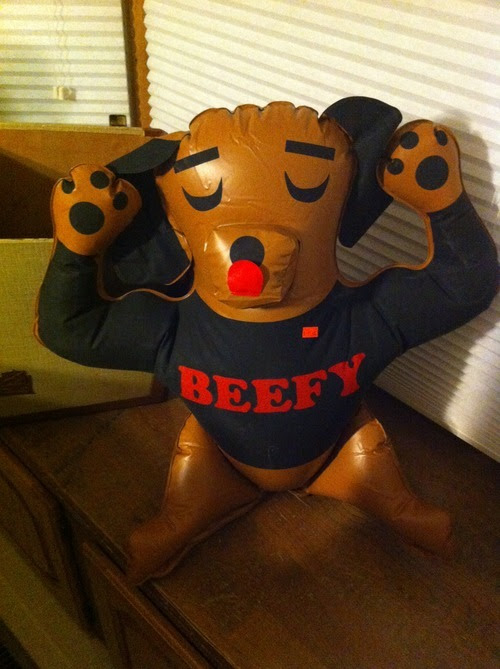 I borrowed the pic from their site.  I'm afraid to blow mine up, just in case he attracts too much attention from Chiquito.  Actually, I'm just too lazy/busy to do it right now.  I'll get around to it. I just didn't want to keep delaying this post waiting on me to get my act in gear.

Please go check out Dig This Treasure.  It's a totally fun read and well worth the time.  I'm not just saying that because I won, either.

I really hope you haven't used up all your winning mojo on Beefy! not that he isn't cute but......