It's Not All Anti-Nausea Pills!

I did manage to squeeze a short thrift run in on Friday after I got my shot at the cancer center.  It was only two stops--that's all I could fit in before I started to feel too many of the effects--but it was worth it.  It was the first thrift run I had made in ages and ages.

I don't normally do these kind of run down posts.  There are lots of reasons for this:

1.  I am fundamentally lazy.  It takes a lot of work to take all these pics!
2.  I cannot stage a photo for crap!
3.  I look for all kind of things, not just antique or vintage (although I love them too).  When I showcase a buy like this, I feel kind of awkward about standing out from the rest of the junking herd.  I can't help it, though.  I like being Ed-clectic!
4.  I don't like handling the merch any more than needed.  Taking pics for posts adds an extra time of wrapping and unwrapping to the processing chain.

Nevertheless, I felt so good about getting out that I had to take pics and share.  Plus, I found some cool things. 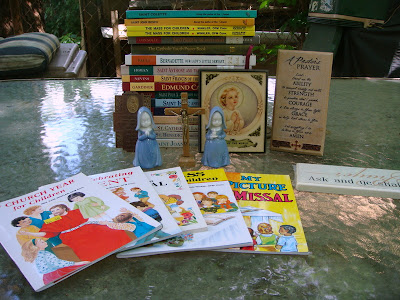 Nice religious article stash--stack of kids' religious books on the saints, plus some plaques and a pair of sweet nuns. 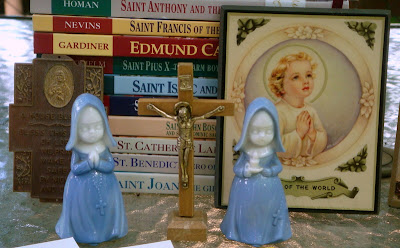 Told you they were sweet!  The Child Jesus plaque in the back is super-sweet, too.  It says "Hope of the World" on it.  All of the books come out of a church library.  I normally don't mess with ex-library books, but these are not titles you run across every day.

I got a few religious plaques, too.  Most are pretty standard stuff, but one is pretty special: 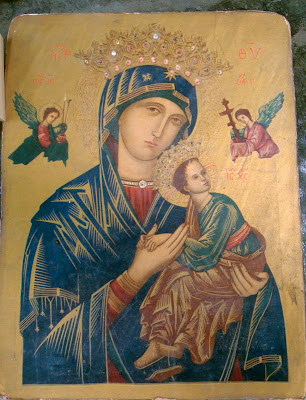 It's an older Our Mother of Perpetual Help and I love her!  Several of the "jewels" in the crowns have fallen out, but that makes me love her even more.  I'm tempted to keep her, so I am Reserving judgement on this one.

I bought a few non-religious items, as well.  Here are a few of them.  Why just a few?  See reason number one above. 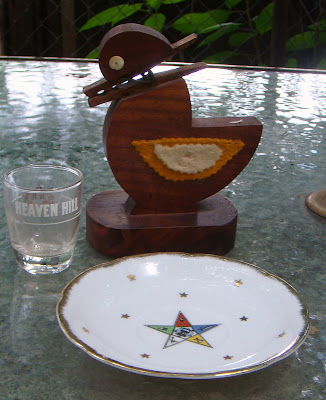 The duck looks like it's been into the Heaven Hill a little bit!  That shot glass is kind of like contraband, by the way.  This particular thrift won't let you shop for items until they are placed on the shelves.  If you take something out of one of the carts of items that are waiting to go on the floor, then they ask you to leave the store!!!!  I saw someone else brazenly taking something out of one of the carts, so I stole a peek.  There were like three things I wanted to grab and buy, but I only had the nerve to grab the shot glass.  I mean, this is my fave thrift.  The clerks know me!  Getting thrown out just would not do!

I also hit a church sale on Saturday.  There's this church in the neighborhood where we lived before we bought the house.  For several years, they've been engaged in the yard sale left-over pick up business.  They make the rounds as sales are wrapping up and offer to haul off what's left.  They hit a couple of our yard sales back in the day when we used to have them and saved us a helluva lot of clean up hassle.

They bring it all back, sort it out, clean it up, re-price if needed, and store it away for the summer, when they put it all out in their basement and open it up for regular sales.  There's not a thrift in the area, so they kind of fill the gap.  Every other week or so throughout the summer, they have a huge sale.  There's always lots of stuff--some of it quite good--and always cheap! 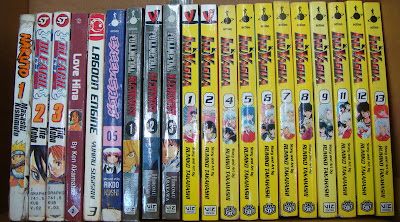 Twenty volumes of manga!  Ten cents each!  I sell tons of this stuff.  We're talking paydirt, here!  The three on the left are ex-library, and I should have left them, but I went for the drama of clearing the whole shelf.  I'll just sell them for a little less than the others.

I bought a bunch more stuff, but this is the most interesting of the lot.  See Reason #1 above.  There are even vintage salt and pepper shakers in the sewing box that I didn't feel like unwrapping.  The Pyrex fridge box has a couple of scratches in the color, but I'll cover those up with a Sharpie.

Okay, I'm just kidding about the Sharpie--just wanted to see if you all were paying attention.  I'm still pretty sure I can sell it.  Flea markets can be very forgiving of slight boo-boos.  I love the design on the black and white cocktail mixer.  The Chi-Chis margarita glasses were impossible to resist.  They'll be an easy Peddlers Mall sale, for sure.

I also got out to a barn sale on Sunday for a thrift that seems to be closing (boo!).  I'll have more to say about the closing, but I only have a couple of pics of the whole ordeal.  It was overwhelming, irritating, crowded, frustrating and absolutely WONDERFUL!  I made about eight or nine trips through--loading up until I couldn't manuver the crowd, then checking out, heading to the car, and diving back into the fray.  If I had my pre-chemo energy, I probably would have stayed the whole afternoon.  As it was I did some damage.

No pics of the haul, but here is the car at the half-empty point. 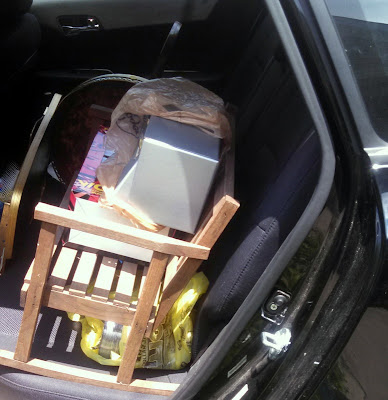 And, here are a couple of shots from the lunacy.  You might recognize the handsome, if portly dude in the middle. 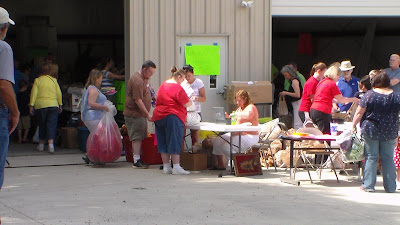 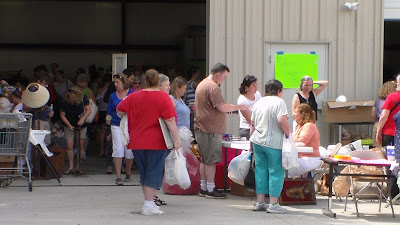 Saling is GOOD Therapy B-)!

And I'm probably lazier than you are...

Great stuff! Love the little nuns and the Our Lady of Perpetual Help looks like the ones we see in museums in Europe. I'd for sure keep that one!